Question about shear force on the beams

Can someone please point me in the right direction.

I am a newbie when it comes to statics. I am trying to understand the following diagram.

Does this have anything to do with external moments?

Please tell me what I should be studying. Thanks.

As the name of the subject, "Statics", suggests, the beam and every piece of the segment (AF & FD), that is imaginarily separated from the beam, must stay static in its own system. In structural terms, it means the beam and the segments must remain in "structural equilibrium", either in the global scene/system, or the local scene/system, the equilibrium requirement is satisfied when $\sum F_x = 0$, $\sum F_y = 0$, and $\sum M = 0$.

Before get to answer your question, we need to designate the positive direction of forces with respect to the Cartesian Coordinate System (x, y, and z axes). Commonly, a force is positive in the same direction as "x" and "y" axes (arrow pointing up and right respectively); the moment is positive when rotate counter-clock-wise (CCW) about the "z" axis.

Now let's first check the beam to see whether it is in the state of equilibrium. THe answer is "yes" (see the top figure on the sketch below). 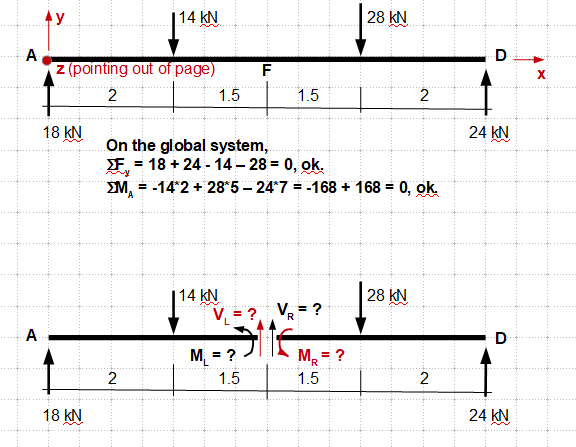 Next, let's break the beam at point "F" (the bottom figure). Note that I've placed all the internal forces on both sides of joint "F" in the positive direction.

- Now let's write the equilibrium equations for the left segment,

$V_L = 14 - 18 = -4$, here the minus sign indicates the force is pointing down rather than the direction drawn (up), so it needs to be corrected on the sketch to maintain balance.

- Similarly, let's write the equilibrium equations for the right segment,

Next, let's summarize the internal forces with their corrected directions:

Note, the directions of the forces are in agreement with the sketch you've provided. Now you should know what is the governing factor, and its importance, - "structural equilibrium requirement".

The reason why this the forces and moments are opposite, is that the cross-section on the edge belongs to both the right and the left. (I tend to think of it as an imaginary infinitesimally thin section, although it's not strictly correct).

Additionally this cross-section is "static" in space. Therefore the sum of forces should be equal to zero.

So the forces and moments acting on one side are acting on the other.

A more correct approach is to consider it is the following: when the section is made (and the beam is broken up to left and right), right at the end there should be forces acting from the other side.

They have no direct relation to the shear if that has confused you.

So that you can imagine how the shear is not related to the moment consider a cantilever beam with a load P at the end. so the shear is constant along the length, $v=P , $ and FBD at point X as we move to X+dX the shear is the same but the moment on the section is increased.

And if our drawing of FBD (free body diagram) is correct they will be equal and opposite (otherwise the section will turn). Their sign convention is anticlockwise doesn't have anything to do with the sheer convention, up or down.

5
Logic behind location of shear centre
3
Beams in Bending: Bending stress / strain distrution
0
shear flow in thin wall members
1
Determining the first moment of area (Q) when calculating the shear flow of a built up member
0
Relation Between Distributed Load and Shear
1
How to find the reaction forces, moments and the displacement of the fixed beam with a link?
3
What is the difference between plastic and compact cross sections?
2
Confused about internal hinges for calcualting reactions