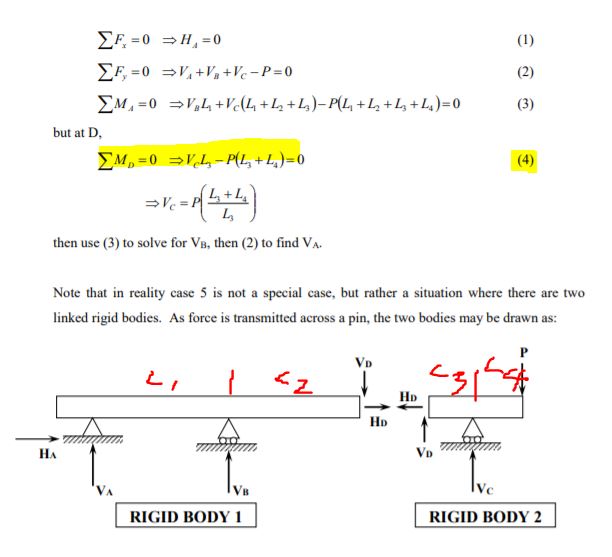 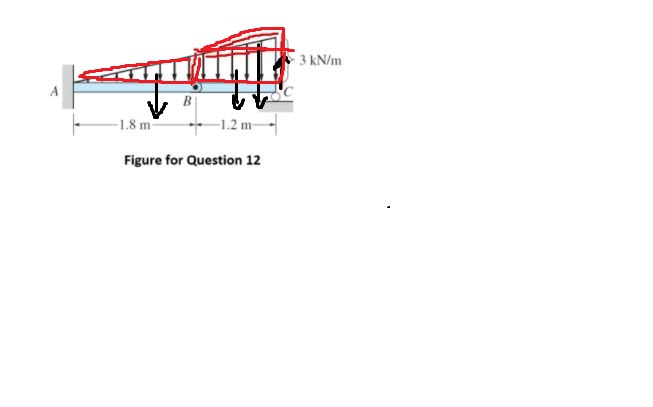 When taking moments about D (the hinge), why does the book only consider the right side? Could you technically consider the left side (-Va x (L1+L2) - (Vb x L2) = 0) as well? By technically i mean unrealistically because i understand that considering the left side would introduce unwanted unknowns into the 4th equation (first 3 are sum of x,y,moment about A) as the equation would become:

Why must the triangular distributed load be split as shown to calcualte Ma? I got the question wrong when i assumed the UDL was concentrated at its centroid (right of hinge) as a single force. I feel this contradicts with image 1 (3) because Vc is also a single force on the right hand side of the hinge? My understanding is that normally (without hinge) the whole triangular load would act at the centroid of the whole triangle?

I do understand that internal hinges don't restrict moments and that only shear forces are transferred across but this doesn't make sense.

Thank you and sorry for the long quesiton.

An extended discussion on internal vs. external forces

We usually like to describe hinges as "places where the moment is always zero."

But, wait a minute, the moment is always zero anywhere in a stable structure. Don't believe me? Let's take a look at the most trivial structure ever, a simply-supported beam with a uniform load:

We also know that the bending moment at the midspan is given by $M = \dfrac{qL^2}{8}$, which in this case gives us 8 kNm, as shown in the diagram above.

But let's calculate the moment at midspan by hand, using our trusty sum of bending moments approach:

So... what's going on here? What's that 8 kNm at midspan if we actually obviously have zero moment there?

Well, what's going on is that internal moment is one thing, external is another, and we can't get them mixed up.

For a more obvious distinction between the two, let's instead look at axial loads: imagine you have a sugar cube between your fingers and you start squeezing it. What'll happen? Well, if you look at the applied forces generally, you'll conclude that nothing will happen: you are applying equal forces in opposite directions, so the net force on the sugar cube is zero! It doesn't matter whether you are squeezing the cube with barely any force at all or if you're putting all your strength into it: you'll always be applying two forces in opposite directions and the net force will always be zero.

The definition of a stable structure is that the external forces are all balanced in every point in space (it doesn't even need to be on the beam. You could calculate the moment at $x = 1000\text{ m}$ and you'll still get zero moment). And when we calculate moment as we did above, what we're calculating is the external moment. Hinges are in no way special with regards to external moment (indeed, nowhere is).

So external moment (and other forces) is useful to know whether the structure is stable: if the external moment were non-zero, that'd mean we're actually dealing with a mechanism that will accelerate over time.

So, if we recalculate the bending moment at midspan looking just at the load to its right, we get:

Notice that since we are calculating the moment to the right of the midspan, I had to "break up" the uniform load so that I'm considering the effect of its right half. After all, that uniform load is arbitrary. We drew it as one uniform load along the entire span, but should we expect a different result if we instead had two uniform loads of equal value, one on each side of the midspan? Of course not!

So just because we drew the uniform load as covering the entire span (and with a centroid at the midspan), that doesn't mean we can ignore its effect on the internal bending moment calculated when looking at only one side of the beam.

We can also calculate this from the left-hand side, but then we need to remember the sign convention that, for left-hand internal moments, clockwise is positive:

As a refresher, here's the sign convention for internal forces:

Now to answer your actual question

As such, when calculating this zero-moment at the hinge, we need to do so by only looking at the loads to one side of the hinge. So for your triangular load in the second example, you need to calculate the moment at the hinge by considering the part of the load that's visible on the side you're calculating.

It is important to understand what is an internal hinge, its behavior, and assumptions around it.

An internal hinge represents a discontinuity in the beam, it carries a pair of equal but opposite force couple, one to each side of the hinge, carried over from the beam segment it supports/connect to, so sum Fy is zero. Another important assumption is the hinge can't restrain rotation, therefore, sum M must be zero.

On your questions, the force to the right side of the hinge is the reaction (an unknown) from the right side beam segment, and as stated above, there exists an equal but apposite force to the left, and it becomes an applied load to the left side support system. The sketch below shows the force couple and unknown support reactions (in read), with the available structural equilibrium equations and unknowns indicated below. You should be able to figure out why the solve starts from the right side. 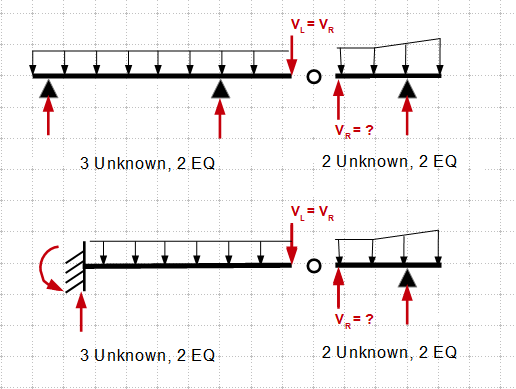 Below is my earlier response, that step by step show you why the solve stars from the right side, rather than the left.

Hope both of the above helps. 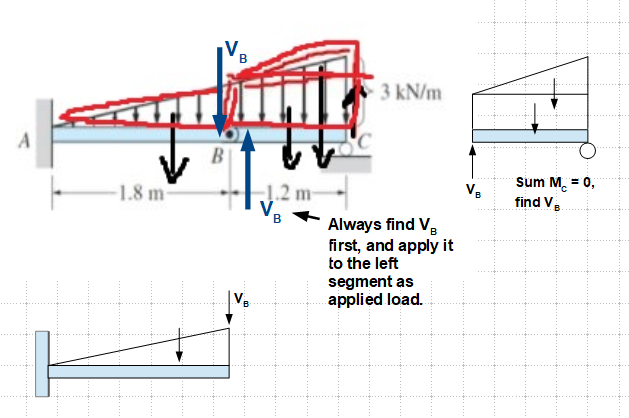 You answered yourself. No matter how much moment is calculated on the left side of the D it has zero effect on the right side of D.

The moment does not pass through the hinge and in this case, no shear transfers from the left to the right either because the two supports A and B have taken care of the vertical forces.

Regarding image two it's just an easier way of bookkeeping of the areas and their CGs.

And the site policy is one question at a time, please.

1
FEA: Changes in initial geometry cause divergence of solution
3
Beams in Bending: Bending stress / strain distrution
1
External indeterminate vs internal indeterminate
1
Internal load in cremona diagram
2
Transfer of moments in beams with internal hinges
4
How to provide lateral support for adjacent masonry during installation of steel UC in an old cavity wall?
0
Beam with internal hinge - Reactions help
0
Slope of the Bending moment diagram where a point force acts
0
How exactly the beam is twisting?
0
Equations of condition: why are two moment equations around a hinge dependent?