Am I correct in assuming this? Why do they always just show the first distribution? Why only show the 2 triangles and not the full square? What is the distribution in the middle of the beam (assuming that is where a single point load is applied)?

Hope this is clear enough to understand!

Thanks for you help! 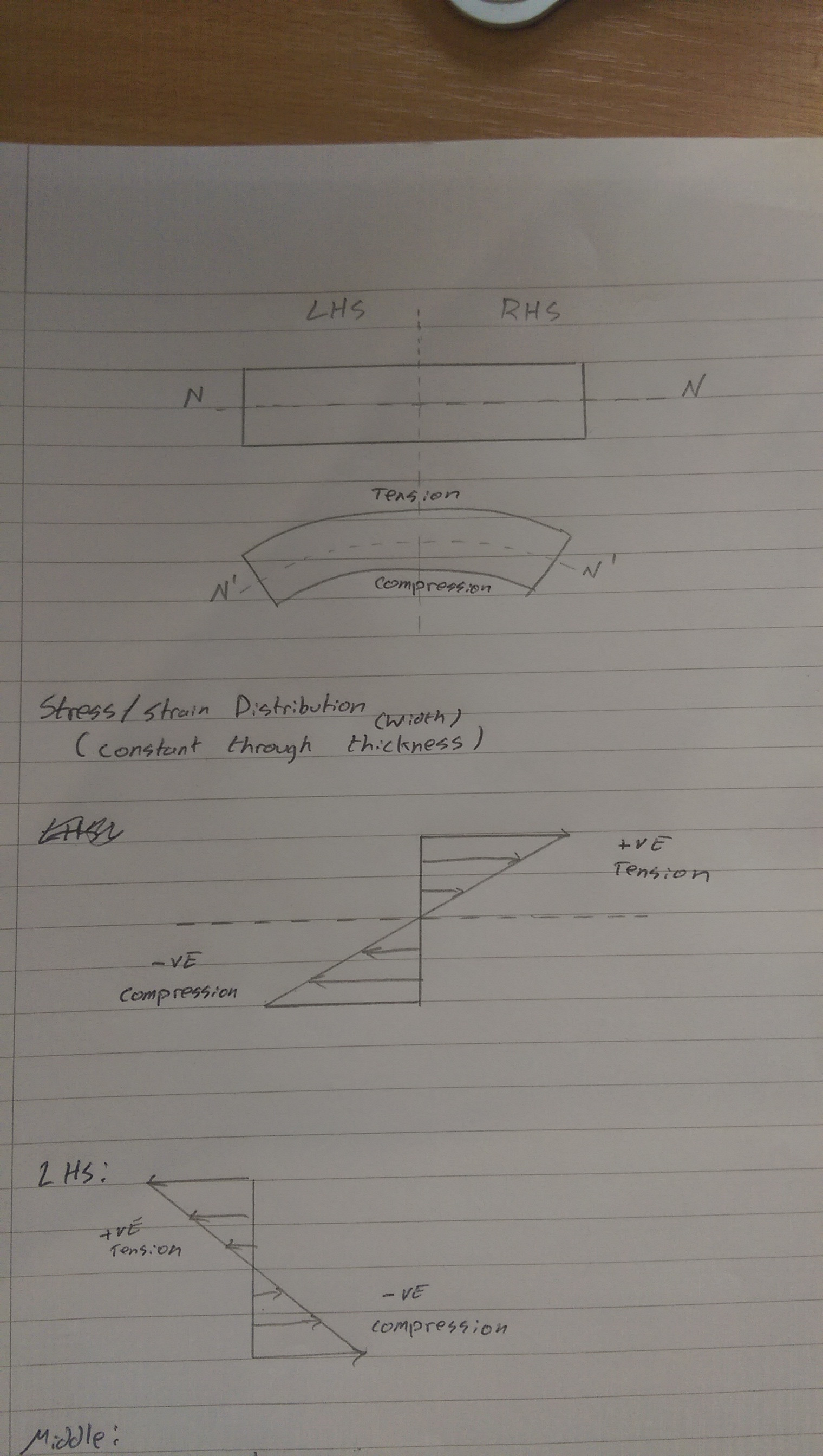 EDIT: Additionally, I feel this is where my confusion orginated from:

I now understand the stress distribution is constant throughout the length of the beam (although unsure as to why it's shown in that particular direction). But can someone please explain why the above image then makes sense. Is this only valid on the right hand side?

Before discussing any such matters, we must define our internal force sign conventions. It is common to define them thusly:

So, tension is positive, compression is negative. Shear forces are positive upwards when on the left side of the cut, but downwards on the right side of the cut (a good way to remember is that positive shear rotates the beam clockwise). Bending moment is positive if it generates tension on the bottom of the section.

As can be trivially seen from the deflection, your beam is under negative bending moment. This means the top fibers of the beam are elongated and the bottom fibers are shortened, meaning the internal stress state goes from tension at the top to compression at the bottom.

So, if we cut the beam at midspan, we can choose to look at either the left or right side of the cut, which will give us:

It is obvious that both sides must be equivalent, since they represent the exact same things in the exact same spot, only looking at different sides of it. And indeed, they are exactly the same, once we remember the sign convention.

Therefore, there is no benefit to displaying the stress distribution on both sides. If you have one, it is all you need and the other is entirely redundant. Now, this also means that one is not more correct than the other. So, if you're going to write a diagram, should you do it with positive axial forces going to right (as in the right side of the cut and in the example you gave in your edit) or to the left? It's entirely up to you. It is customary to have positive axial forces going to the right because, well, usually positive values go to the right.

You seem to be confusing the stress distribution in the beam with the forces on either side of a cut in the beam.

The axial stress component is positive (tension) on the outside of the curve and negative (compression) on the inside.

7
Can I reduce the column moment due to beam, by setting the beam end to pin?
0
shear flow in thin wall members
2
Computing strain in beams
1
Why/how normal shear stress is zero in thin-walled beams?
2
Confused about internal hinges for calcualting reactions
1
Question about shear force on the beams