The book I'm referring to for studying beams, said that its quite cumbersome to construct shear force and bending moment diagrams, by writing the SF and BM equations for each segment of the beam and then plotting the equations. To solve this problem we can form relationships between shear force, Bending moment and loads and then use them to construct SFD and BMD.

So, the book starts off by developing a relationship between shear force and load. In doing so, it says that consider a beam with some arbitrary distributed load. At any distance x, we take an element between two sections. The distributed load on this element can be assumed uniform with intensity say, $q$. 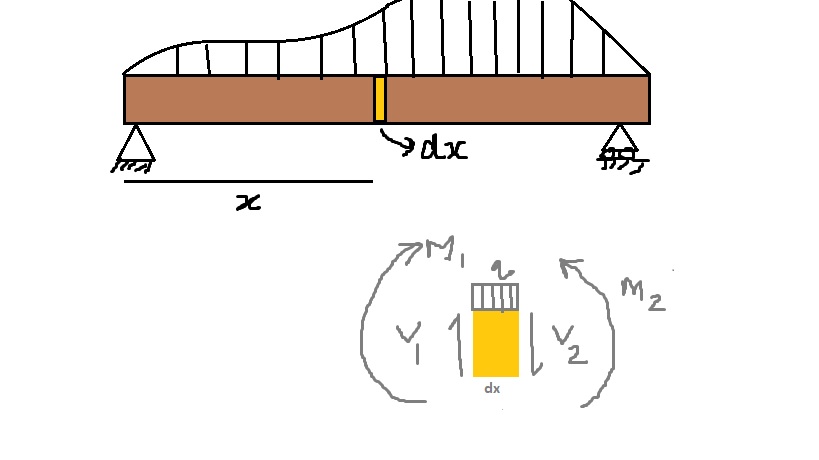 Then it says that shear force and bending moments will be developed at each section of this element, and in general they can vary along the length. The book then assumes the direction of shear force and BM to be what it considers "positive".

applying the equilibrium condition to the element yields,

The book came at this result by taking the SF and BM as positive (as is shown in the figure).

If I take the direction of SF and BM opposite to what the books takes (i.e. shear force tends to produce an antickw rotation of the element) I get

The relations are different depending on what sign of SF and BM I take. However I have seen the book using the first relation (with a -ve q) even in places where the element is acted upon by -ve shear force (i.e. when the shear force tends to rotate the element antickw)

Why the equation $$\frac{dV}{dx}=-q$$ applies even when the shear force tends to produce an antickw rotation, even though it was derived for clockwise rotation shear force.

The reason the convention picks the shear positive when on a differential element it tries to rotate clockwise is that this rotation will produce a positive conventional moment, bending the beam into a smile.

This convention makes the calculation easy and because conventionally a horizontal beam is analyzed from left to right and the positive shear direction is vertically up, this convention works.

Why the equation $\frac{dV}{dx}=−q$ applies even when the shear force tends to produce an antickw rotation, even though it was derived for clockwise rotation shear force.

Because if you have a section like this it means either q is applied to head up or $V2<V1$ then we have $\ -(-q)=q\ $ and this will cause an anticlockwise spin. But still, if we stay with convention it will work.

you can Pick up any direction as positive as long as you stay consistent throughout the length of the beam.

"The author has taken shear force as positive if it tries to rotate the element clockwise,..."

9
Why don't we use principal maximum stresses when designing a structural element?
1
Derivation on torque required to raise load, isn't there a force disapearing?
1
Shear force and bending diagram un-uniformly distributed load
3
What really is so special about principal stresses or stress invariants?
0
Single shear bolt shear force and moment diagrams
0
What does the author mean? Turbomachinery - Reaction
0
Does F_x generates "Transverse Shear Stress" shear stress at the fixed end A?
0
Slope of the Bending moment diagram where a point force acts
0
Equality of Normal Stresses on opposite faces of the element