Logic behind location of shear centre

When we apply a vertical shear force Sy and the structure is symmetric about x axis, then why is it logical to have the position of shear center at the location of intersection of line of action of shear force and x axis?

If we go by basic definition then the moment about the shear center due to shear forces should be 0, so the line of action of external shear force is logical, but when we consider moment about x- axis, rather than getting cancelled, I think they get added.

eg. This is the situation. 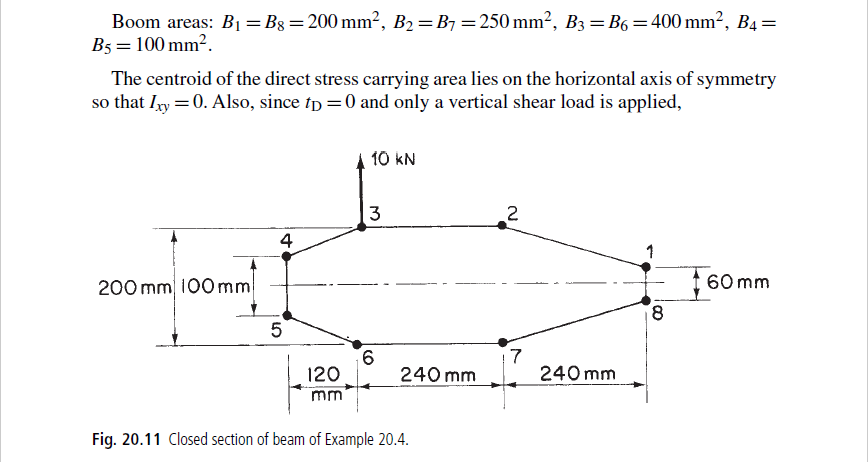 Now look at the final solution depicting the shear flows

So as I suggested, instead of moments being equal and opposite, I think they exactly equal in magnitude and direction. So where am I getting a wrong interpretation?

EDIT:- I tried to keep the question general and explained accordingly, to be specific the question is as follows:-

The thin-walled single cell beam shown in Fig. 20.11 has been idealized into a combination of direct stress carrying booms and shear stress only carrying walls. If the section supports a vertical shear load of 10 kN acting in a vertical plane through booms 3 and 6, calculate the distribution of shear flow around the section.

x is horizontal and y is vertical

It is a closed section beam. An idealized version of an airplane wing

why is it logical to have the position of shear center at the location of intersection of line of action of shear force and x axis?

That statement isn't logical. I think you have misunderstood how the shear centre is defined.

The position of the S.C. depends only on the geometry of the beam section, not on the applied loads.

8
Interpretation of shear flow/shear center of L-profile
2
Maximum Shear stress in Beams
0
twisting at shear center / centroid
1
Determining the first moment of area (Q) when calculating the shear flow of a built up member
1
Locations of max stresses in a circular beam?
3
How do you ensure that a beam is loaded through the shear center?
0
Does the Superposition principle actually make sense in reality for a rod subjected to bending and axial force togehter?