Closed loop guidance and control: how to tune a system with multiple feedback controllers?

I'm trying to design a closed-loop guidance system for rockets - something that can be implemented in Kerbal Space Program, for example. To do this, I'm following the design process described in Ashish Tewari's Advanced Control of Aircraft, Spacecraft and Rockets. His approach breaks the system up into a guidance controller for trajectory tracking and 3 attitude controllers for pitch/roll/yaw control: 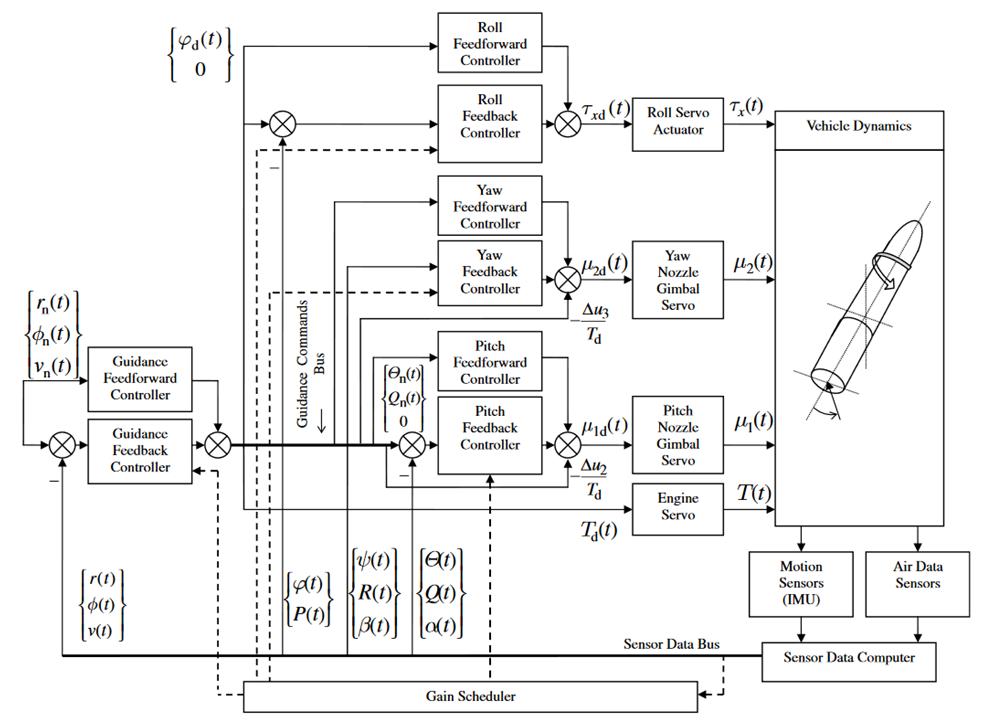 The controllers are designed with a state space approach. The attitude controllers send gimbal angle commands

to the engine to maintain attitude control (zero angle-of-attack), while the guidance controller also has a feedthrough term

He then demonstrates how to tune each of the controllers individually using LQR, but leaves integrating them as an exercise to the reader.

As a first step, I tried implementing the guidance and pitch controllers individually in Simulink, then combining them as prescribed. However, while the individual performance is very good (as expected), their combined performance is abysmal (see below image). The pitch and guidance controllers' commanded gimbal angles start 'fighting' each other immediately, saturating the gimbal actuator and resulting in zero control over either the trajectory or angle of attack.

With all that said, my questions are:

I cannot really comment on the LQR part of your question as I'm only marginally familiar with it (I've never seen a practical/industrial implementation but that's probably due to the specific application area I'm working in).

In general it is not possible to tune multiple SISO controllers for a MIMO system without considering the interaction between the different loops. Otherwise the combination of SISO controllers does not necessarily result in optimal performance or can even result in an unstable system. Look up relative gain array (RGA) for one approach towards investigating this interaction.

As your example shows tuning these controllers requires a MIMO approach. The simplest approach would be to apply sequential loop closing in combination with your favorite controller tuning algorithm.

Not the answer you're looking for? Browse other questions tagged control-engineering control-theory aerospace-engineering aerodynamics or ask your own question.