I am interested in designing a GNC controller for a 3DOF underactuated vehicle that follows a path in 2D space. The two available control inputs are the thrust force in the surge direction and a steering yaw moment for heading change. There are two control objectives here: one, maintain a desired surge velocity $u_d$ (dynamic task), and two, utilize a guidance law to steer towards a path (geometric task). My question is, if I were to decompose and pursuit these two objectives with independent control laws (standard practice, as is shown later), what would be the overall stability guarantees of the resulting control synthesis? 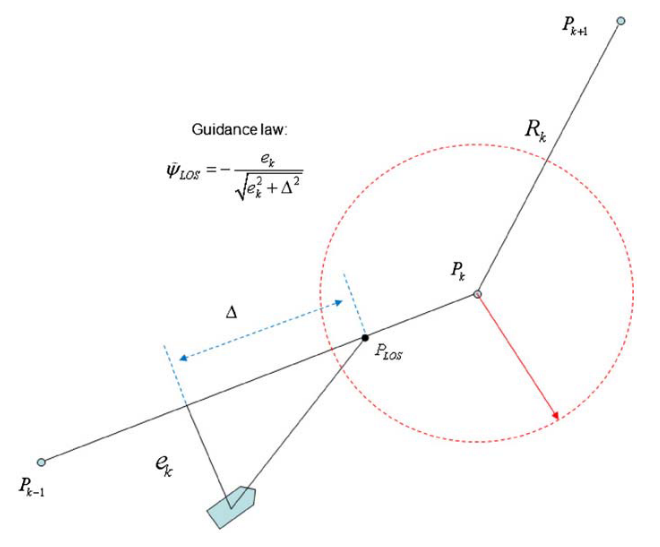 The LOS guidance law says that if an appropriate heading signal $Žł_d$ is tracked, then the cross-tracking error will be minimized and the path will be followed. Therefore, one can build a GNC controller on this principle, consisting of two control laws, the first being responsible for surge speed control:

where $F_u$ is a damping force and $k_u$ a gain factor, while the second control law being responsible for yaw control

Here, control law $Žä_u$ is based on feedback linearization and thus guarantees exponential convergence to $u_d$, next, control law $Žä_r$ is globally asymptotically stable, and therefore, it follows mathematically that the overall controller is ╬║-exponentially stable (see paper).

I'm not quite sure whether my problem falls under the cascade control classification since there is no inner and outer control loop; the reference velocity $u_d$ is set a priori and the $Žł_d$ tracking is independently pursued. References or direction ideas that would help me assess stability of such controllers would be appreciated, thanks in advance.

Okay, so after carefully considering the literature on the topic, the answer is "it depends" - basically what @AJN said: "If the rotational and surge dynamics are uncoupled or weakly coupled, then independent control law synthesis may work. If they are coupled, then the stability is better analysed for the combined system." I should also add that it depends on the types of stability of the respective control laws.

For the case of the control of an underactuated system, the main objective is to show that all dynamics are stabilized given the less-than-necessary control variables. Correspondingly, stability must be approached using a cascaded control systems approach. I refer future readers of this question to the paper "On global uniform asymptotic stability of nonlinear time-varying systems in cascade".

In the paper, sufficient conditions are given that guarantee that a globally uniformly stable (GUS) nonlinear time-varying (NLTV) system remains GUS when it is perturbed by the output of a globally uniformly asymptotically stable (GUAS) NLTV system, as well as whether two GUAS systems yield a GUAS cascaded system, under some growth restrictions over the Lyapunov function.

Not the answer you're looking for? Browse other questions tagged control-engineering control-theory stability nonlinear-control or ask your own question.

0
Control Systems: Why is this system unstable?
1
Are linear controllers inadequate for nonminimum phase systems?
2
Cruise Control Project on Toy Car
0
Control systems, Nyquist plot and root locus
2
Closed loop guidance and control: how to tune a system with multiple feedback controllers?
3
Controls Project: Help needed finding 3rd order system
0
Stability of a closed loop control system
1
How could I verify the stability of a real system with non-linearities?