Why heat transfer happens only via conduction in this case?

Why heat transfer between a heated flat plate and a fluid happens via conduction only and not convection, when the fluid is present below it?

Consider a plate under which a fluid is present and it extends to infinity in the vertical direction. Let's assume that the fluid and the plate were initially at the same temperature (say $25^o C$) . If I took any fluid particle as shown in the figure below, the buoyant force will be balanced by the weight of the particle, so that the particle does not move. This will be true for any fluid particle. 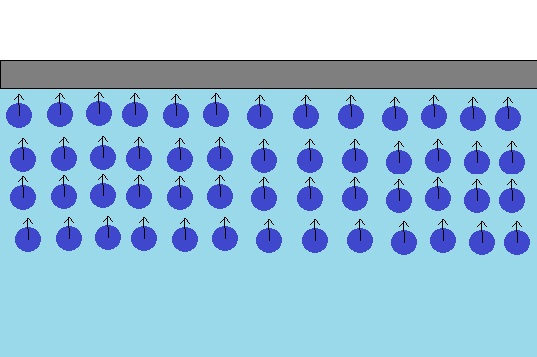 I'm told that in this case the heat transfer will take place via conduction and no bulk fluid motion occurs. However, can't it be the case that since on all fluid particles some force acts in the upward direction, the fluid particles which are present somewhat below start to overtake the particles that are present above them to make convection happen?

In a nutshell I wanted to know why the particles don't move even though there is a force on them? Why the heat transfer doesn't happen via convection?

So, if the heating element is at the top of a tank, the hot fluid can't rise more that the top of the tank which means it cannot cause convective flow.

This is why a kettle is heated from the bottom so that the heat transfer mechanism is convective flow allowing the colder water to sink to the heating element.

Consider a solar water heating tank, which can be heated by Solar energy and a gas boiler when there is little sun. The solar coil is placed at the base of the tank so any warm water ie heat from the sun can be added to the tank, remember the coldest part of the tank is the bottom. The boiler coil is placed at the height where it can heat a sufficient amount of water to cover the needs, while leaving a volume of water for the solar system to work into.

So, the tank works on stratification where any heated water rises to the level where it meets water of the same temperature. Also, hot water is removed from the tank for showers and, perhaps, heating (underfloor is good as it uses relatively low temperature water to heat), so heating water can be taken from below the top of the tank.

Did an experiment in physics class at school where an ice cube was weighted to sit a the bottom of a 4" test tube, while the open end was heated in a bunsen and the water boiled. So water at 0 deg C and 100 deg C only 4" apart, conduction anyone...