Equations of condition: why are two moment equations around a hinge dependent?

Therefore, one extra equilibrium equation is added to the system due to the introduction of the hinge: either ∑MABB=0 or ∑MBCB=0. Only one of these equations counts because the two equations are not independent. They are not independent because they both mean the same thing, that the moment at the hinge is zero. If I know the moment on one side of the cut is zero, then I know automatically as well that the moment on the other side of the cut must be zero. So, for each internal hinge in a structure, there is a single equation of condition: ec=1.

So, the introduction of a hinge gives us an extra equation, $\sum M_B=0$. This is called an equation of condition. The text mentions that only a sum of moments on one side of the hinge counts as a new equation, as the moment sums on either sides mean the same thing. 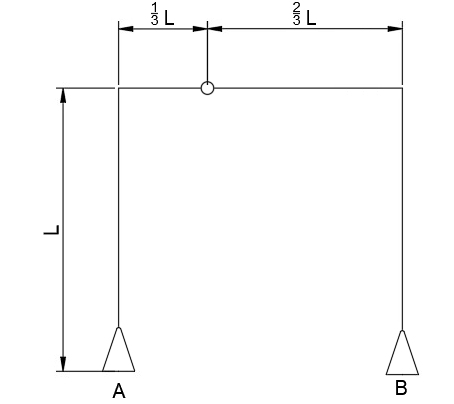 The frame has a hinge 1/3 of the way along the top beam. So if the reaction forces at the supports are $A_y$, $A_x$, and $B_y$ (roller support at B), we could write moment about the hinge in two ways:

Here I have neglected the loadings on the frame, but they would just be included as constants in the equations.

So what I don't get is why these equations cannot be used as two new equations. The text says they must be dependent. Why?

The sum of moments about any point is 0. Since 0=0 is always true, the equation for moments about different points turn out to be the same equation! This can be better understood from an example.

It is confusing through reading the text, but it should be clear through the sketch below. 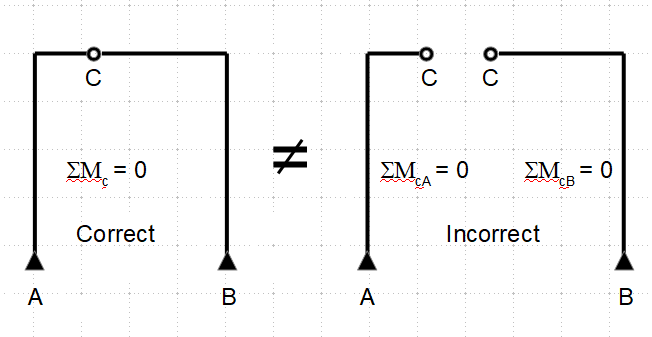 The system on the left has 4 unknowns, however, the presence of the hinge enables us to write the necessary 4 equations to solve the system.

But, if separating the integral frame into two subframes (similar to repeating the $\sum Mc = 0$ from each side of the hinge), and solving each frame with the equilibrium equations, $\sum Fx = 0$, $\sum Fy = 0$, and $\sum Mc = 0$, the results will be erroneous because of the dependency of internal forces (in this case, $V_{C_L}, V_{C_R}$) on each side of the hinge, albeit the overall moment about "C" is zero.

3
Free Body Diagram Problem
1
Can a simple application of two forces have two different outcomes on a rigid body?
2
Exact anlytical solution for beam-lifting problem constrained by crane capacity
1
Calculating area moment of inertia for a beam with underslung plate?
8
Moment equation from dynamics differs with equations from physics & statics. Where did I go wrong?
2
Confused about internal hinges for calcualting reactions
3
I seem to have a fundamental misunderstanding about the double integration method for calculating beam deflection
0
Very confused as how to calculate the degree of static indeterminacy of trussed beam
0
Mechanism and static determinacy