Moment equation from dynamics differs with equations from physics & statics. Where did I go wrong?

In my dynamics class, we're being asked to solve the following problem:

Since I'm given the initial velocity, final velocity, and distance, I solved for the acceleration of the plane using kinematics:

Now this is where my approach starts to differ from the formulas recommended by the class. I decided to set the moment about point A equal to zero, because the plane is not rotating as it moves down the runway. I seem to remember from both statics and physics that if a body is not rotating about a given point, you can simply set the moment around that point to be zero.

Let N be the reaction force at B. Combining the above assumption with Newton's second law in the x direction, I get:

Solving for N gives me:

According to the solution guide, this is incorrect.

The guide uses a formula which was introduced to us in the textbook, which is as follows.

For some point P fixed on a rigid body with center of mass G, the moment about point P is given by:

The book cleverly chose a point C on the plane through which both R and A (the reaction force at wheel A) pass. See below: 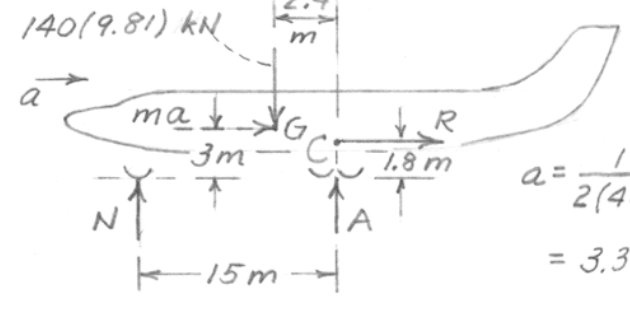 Using the moment equation above and setting $\alpha = 0$ (because the plane isn't rotating) gives:

From the physics and statics classes I've taken in the past, I've always been taught that $\Sigma M = I\alpha$; there was never that extra "$+ mad$" term thrown onto the end. That term is basically saying that an accelerating body with no rotation can still have a moment about a point. By contrast, in my physics and statics classes, I recall using the fact that if a body is stationary (no angular acceleration), we can set the moment about any point on the body equal to zero to help us solve.

My Guess at Where the Inconsistency Lies:

Here's my guess at where the inconsistency lies: in my statics classes, we assumed that the rigid bodies we were analyzing had not only zero angular acceleration, but also zero linear acceleration. (It's statics, after all!) In dynamics problems such as this one, however, there is a nonzero linear acceleration which must be accounted for. The "+mad" term must come from the fact that for any point object, the moment about some fixed point O is given by:

As I'm writing this, I think the intuition totally makes sense. It seems the formula used by the solution guide accounts for both rotation of the rigid body about its center, and linear acceleration of the body with respect to some point P outside the center of mass of the body.

I'll still post this though, in case anyone would like to correct me, add anything, or use this for their own reference.

Remember, the total moment at any point for both dynamic and static equilibrium problem evaluates to zero always. Hope it helps you!

:Addition: What is said above is indeed correct but for use in a classroom and the overall more agreed on solution is the one that you mentioned using the planar motion equations for moments. The method described above is an application of D'Alembert's Principle which is really great as a reasoning but tends to leave most students confused when applying to problem solving.

You can't set the moment to zero unless the body isn't constrained in its movement. If you could set any moment to zero that didn't move, statics wouldn't work.

2
Why is the moment of forces on a rigid body in static equilibrium must be zero about any point, even if the position of that point is not on the body
1
Can a simple application of two forces have two different outcomes on a rigid body?
0
In the general case of the plane motion of a rigid body, the resultant does not pass through the G of the body. Why is that?
0
If aboard a train being driven along a track by centripetal force, would it feel like you were on a regular straight track?
0
Force and the reactions on the supports
0
Reaction force at a pin joint for a rod that is rotating about a fixed axis
3
Modeling rigid body dynamics: Trouble with equations, encountering nonsense answers
0
Estimating yaw torque and power of HAWTs