My question is a continuation of the topic.

Unfortunately, last time I didn’t get any help, so I decided to reformulate the question.

I have a system of differential equations like this:

$x$ and $y$ - variables of the system of differential equations.

The solution is to go from the starting point $x(0)$ to the point $x_{*}$ at which the minimum or maximum of the function $f(t)$ is reached.

For my system with such parameters, the solution will look like this: 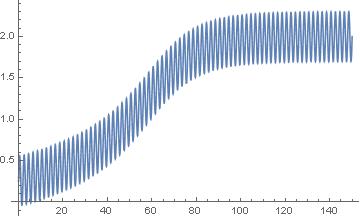 It can be seen that the transition process is a transition from the initial point to the final one with a certain character, which is added to the additional sinusoidal signal $\alpha \cdot sin(\omega t)$.

It is necessary to change the nature of the transition from one point to another, making it exponential (naturally retaining an additional sinusoidal signal $\alpha \cdot sin(\omega t)$), i.e. it must be described by law: 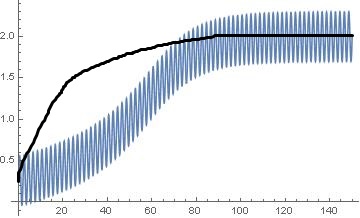 The problem is complicated by the fact that the function $f(t)$ and the point at which its minimum/maximum $x_{*}$ is located, generally speaking, are not known to us.

Help! Please give at least some idea. I am desperate and my hands give up.

The problem is complicated by the fact that the function f(t) and the point at which its minimum/maximum x∗ is located, generally speaking, are not known to us.

So if I understand it correctly: $f(t)$ is a unknown function, of which your controlled system should approach either the maximum or the minimum value $f(t)$ has over $t$. If I look at your system of equations, this appears to be rather easy. Even though $f(t)$ is not known, we do know its derivative: $$\frac{dy}{dt} + y = \frac{d}{dt}f(t)$$ As commonly known, if a functions derivative equals 0, the function can be in 3 situations: Either a local minimum, local maximum or a saddle point (think of $x^3$). Given is that $f(t)$ only contains one extreme, the best bet is to say that if the derivative reaches $0$, the optimum point $x^*$ is reached. This means that the control goal actually becomes the following: $$\frac{dy}{dt} + y = 0$$ But this is the furthest I can help. Simply because I have no insight in what the physical meaning of the states $x$ and $y$ are, therefore I cannot give an advice on where to apply an external input (which is required to accelerate your problem). Additionally, your definition of $f(t)$ sounds poorly. if $f(t)$ is just a function of time, it implies that $y$ responses independently to $x$ and that $f(t)$ is not affected by either $y$ or $x$. your example showed that $f$ is a function of $x(t)$ instead, which does imply the link.

Not the answer you're looking for? Browse other questions tagged control-engineering dynamics nonlinear-control adaptive-control or ask your own question.