Save money with using a refrigerator correctly - blowing cold air to the back of it?

We are heating up our houses in winter to ex.: 21C to then have an insulated box inside the house, which we cold down to 5 and -15C, and we call it a refrigerator.. :)

Like if I would put out the whole refrigerator to outside, where there is ex.: day: 5C night: -5C, I would be sure that the electricity consumption (operation cost) would go down, because it wouldn't have to battle with the indoor 21C.

The question: would blowing cold air from the "heat-pump boiler" to the back (to the bottom or top of the back?) of a refrigerator help reduce the operational cost for the refrigerator?

The CoP of a refrigerator uses the cold heat flow and the work input, expressed as $\dot{q}_c / \dot{w}$. The Carnot expression based on temperature is $T_c / (T_h - T_c)$, where $T_c$ is the internal cold temperature and $T_h$ is the external hot temperature. Decreasing $T_h$ will increase the CoP, meaning less work flow $\dot{w}$ will be needed to remove the same amount of heat $\dot{q}_c$.

Application to System at Hand

In a picture of a control volume for the system at hand, $T_h$ can be taken as the temperature of the coils used to remove the heat. The heat flow to the air that surrounds the coils happens outside of the control volume.

When the first factor is constant, anything that can be done to increase the second (heat flow from coil to air) will decrease $T_h$. Two approaches are to decrease the temperature of the air $T_{air}$ and to increase the flow rate of air. The first approach increases the temperature difference in the convection coefficient $h$ in the equation $\dot{q} = hA(T_h - T_{air})$, thereby increasing the heat flow from the coils, thereby decreasing $T_h$. For the same $T_{air}$, the latter approach increases $h$ of the air, thereby increasing the heat that is removed from the coil, thereby decreasing $T_h$. 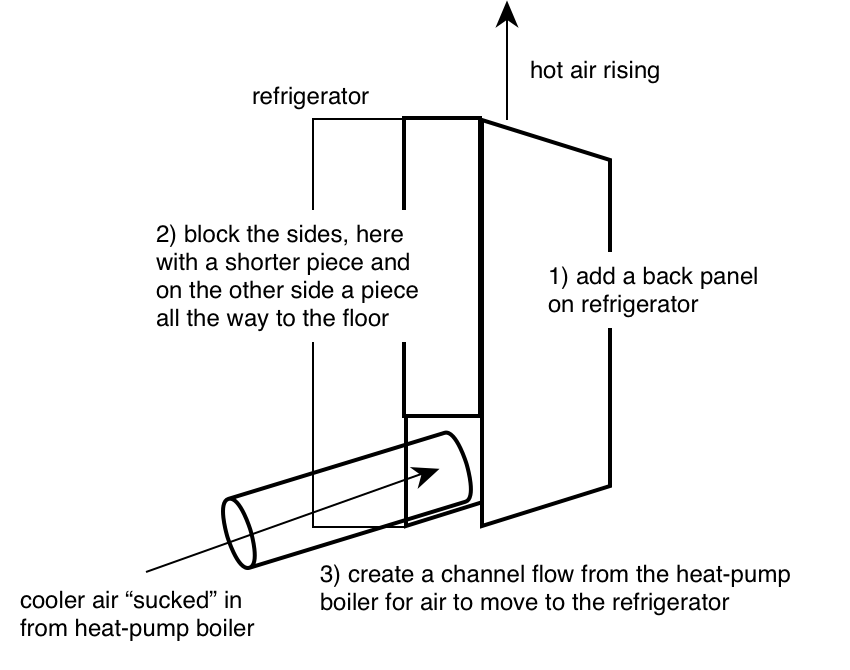 The aesthetics are a different story.

Jeffrey J WeimerJeffrey J Weimer
2,68555 silver badges1212 bronze badges
$\endgroup$
Add a comment  |
1
$\begingroup$
Want to improve this post? Provide detailed answers to this question, including citations and an explanation of why your answer is correct. Answers without enough detail may be edited or deleted.

I would design the fridge's heat exchanger in such a way that the exothermic side is kept wetted and exposed to a natural air stream. The resulting evaporation will have a greater cooling effect than just cool air.

Not the answer you're looking for? Browse other questions tagged thermodynamics heat-transfer temperature refrigeration or ask your own question.

19
Why don't refrigerators have parts outdoors?
5
How to minimize heat loss in an air extractor?
1
Rate of flow of steam going from one pressure to another
3
Is it better to heat a heat pump evaporator or the load directly?
3
Store seeds at 1°C
0
Ventilation setup high sleeper night cooling
2
Why not drive an air source heat pump domestic heating system with an auto engine?
1
Vertical vs Horizontal Ground Loop Heating
1
Does a house heating system affect perceived and true indoor air humidity?
1
Wall Humidity Condensation