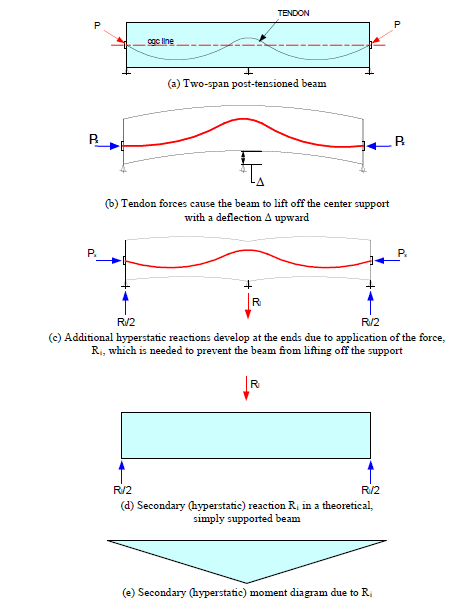 Above is a picture I found online, showing a prestressed concrete beam. It mentions a "hyperstatic moment".

When a beam is prestressed, it deflects upwards. According to the picture, this deflection needs to be counteracted by an additional reaction at the center, which in turn creates the hyperstatic reactions at the ends. But isn't this upward deflection the whole idea of using prestressed concrete? Isn't this deflection counteracted by the working load on the beam? Isn't the idea to design the prestress so that when the intended load on the beam occurs, it balances the deflection from prestress and the beam is straight again? Why do we need to discuss this hyperstatic reaction as something separate?

To understand the hyperstatic moment, we need to first remember that prestress is, by definition, the application of an internal stress state on the beam. Therefore, it cannot generate external loads on the beam. That is, if you had a beam floating in space and then you applied some prestress to that beam, it would deform but not present any rigid body motion.

Without loss of generality, this can be easily seen with a simplification of your case, where instead of parabolic prestress we have polygonal prestress which only applies concentrated force at the points of curvature (just get the maxima and minima of your parabolas and then connect them with straight lines).

If we then apply this prestress to a simply-supported beam, we see that no reaction forces are generated, even though we have a non-zero bending moment diagram:

However, if we then look at the deflection of the beam, we can see that even though the midspan has a downwards force applied to it, the beam as a whole still displays a positive camber.

But then we remember that you aren't dealing with a simply-supported beam, but a hyperstatic (or statically indeterminate) one, with a support at the middle. So what'll happen in the real case? Well, the support won't allow the camber at midspan to occur, which it does by generating a downwards force (reaction) on the beam at it's "midspan".

If we simply isolate the effect of that midspan reaction (by replacing it with a concentrated force), we get the hyperstatic moment diagram*; note that if we add it to the bending moment of the isostatic case, we get exactly the same as in the hyperstatic case (the values are actually a bit off — 4.0 at midspan here and 3.8 above — because of rounding, I should've used more decimal places when defining the force):

If we were to look at the deflections, we'd note the deflection at midspan is precisely equal and opposite to that found in the isostatic case, ensuring the support's boundary condition is satified.

So here we can see that the hyperstatic moment is the moment generated by a beam's boundary conditions to counteract the deflections caused by the prestress. If you came up with a prestressing configuration that satisfied all boundary conditions (for example, generating zero deflection at the midspan support), then there'd be no reaction forces to that prestress and therefore no hyperstatic moment. But in practice that never happens.

An isostatic (statically indeterminate) beam, however, will never present a hyperstatic moment because it can simply accommodate these deflections instead of resisting them.

* Those who are paying attention will notice that my choice of the central support as the one to be replaced by a concentrated force was entirely arbitrary. I could just as easily have chosen the left or right supports instead, creating simply-supported beams with cantilevers. However, the choice is irrelevant; whichever one is chosen, the diagram will be identical.

4
Derivation of the AASHTO formula of interior girder moment
1
Why does a simple pin-ended triangular (arched/curved) beam deflect more due to secondary effects (non-linear analysis)?
2
Structural mechanics - computing bending moment
2
What is the bending moment formula for continuously supported beam of equal span?
3
Second Moment of Inertia (or Second Moment of Area) of Beam Section
4
A way to calculate the magnitude of the moment
0
Along which direction is the area moment of inertia taken in bending moment equation?
1
A reaction moment vs bending moment. Can someone please clarify