What is the relationship between the strain in different directions?

A cube made of an isotropic material is subjected to a tensile stress as shown in Figure 2. What is the relationship between the strain in different directions ? 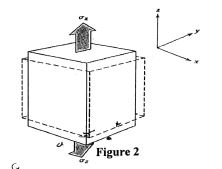 In this case, we say that $\epsilon_{axial}$ ($z$-direction in your diagram) is positive by convention. Then, for a normal material with a Poisson's ratio $\nu \ge 0$, $\epsilon_{transverse}$ ($x$- and $y$-directions in your diagram) will be negative. The fact that the material is isotropic means we have no way of distinctly labeling one direction $x$ and one direction $y$, so it must be the case that $\epsilon_x = \epsilon_y$.

Note, however, that even though almost all materials will have $\nu \ge 0$, there does exist a class of materials known as auxetics which have $\nu \lt 0$. A common naturally occurring example is $\alpha$-cristobalite silica. In this case, the relationship between the strains is not so immediately obvious, and would depend on the exact value of $\nu$ (since the strain would be positive in all directions). These materials are not usually isotropic though, so $\nu \ge 0$ is probably a safe assumption.

Not the answer you're looking for? Browse other questions tagged mechanical-engineering materials material-science or ask your own question.

0
Relationship between Pressure and volume with Air
5
Poisson ratio boundary condition
1
What is strain hardening exponent?
2
What is the difference between work hardening and strain hardening?
0
What Is the Different Between Single Nipple, Double Nipple, and Pipe Nipple
0
is there any relationship between endurance limit and tensile strength for thermoplastics?
0
What is the linear strain for given lateral strain?