Failure modes of a zimmer frame

I've been asked to modify an existing zimmer/walking frame for a tall person. Bashing the bits of metal is the easy bit, just use tube to make longer legs to replace the original short removable adjustable ones, using tube that's actually thicker wall than the original.

The tricky bit is now they've asked me for a new weight rating, given that the frame is larger. The original frame was rated for use by people up to 180kg. It would be quite easy to say that as the new height is $x$, we should derate the weight by $x$, or by $x^2$, or by $x^3$, but justifying a PIDOOMA for the exponent or the weight is more difficult.

What are the expected failure modes of the frame? Here's a picture of it after fitting with the extended legs, the lowest 500mm. 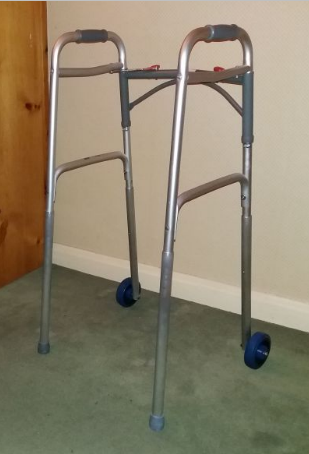 I'm assuming two failure types are relevant, prompt failure resulting in the user ending up on the ground, and increased wear meaning a weakening after several years' use.

For prompt failure, if I assume that all joints are hinges, then the weakest appear to be on the cross member holding the two side frames together, which is why I guess there are corner braces there.

The moment on those hinges, should the user slump sideways on the frame, will be increased slightly by the longer legs, but will still be dominated by the width of the frame, so not even by a factor of $x$. By my reckoning, it's the smallest height of the triangle formed by the width and height of the walker, and a diagonal from one handle to the floor contact on the other side.

As the new legs are stronger than the original, and use the original spring pins into the same size holes, there should be no reason at all to expect any reduction in simple vertical strength.

The fretting moment at the area of tube overlap where the adjustable legs couple to the frame, held in place by spring pins, will increase directly in proportion to the adjustable leg length. However, the overlap region has been increased in length, more than proportionately, to reduce the contact force caused by this moment. So it may be no worse.

A colleague has suggested a simple reduction to a nice round 100kg, which would certainly be conservative. My concern is that I wouldn't be able to justify it, and that it may exclude other potential users for no good reason.

Are there industry standard tests for this sort of thing? How would the original manufacturer have rated it for 180kg users?

Your last paragraph is the key one: Yes, there industry standard tests, and they were able to rate it for 180kg by passing those tests. You can do theoretical calcs until the cows come home to make sure you pass those tests first time, but you must undertake and pass these tests prior to adding a rating sticker or you open yourself right up to liability.

I have picked out some key points, but you should read the whole document (or local equivalent) yourself.

One walking frame shall be tested, through Stability, Static Load, Fatigue, and Static Leg-strength in that order.

Stability: Forward, Backward and Sideways tests have different tilt angls, then a vertical load of 250N is applied to the centre of the hand grips.

Static Load: A load of 1,500N is applied, with an additional 15N per kilogram of maximum user weight above the standard maxium of 100kg. You would need to test to 2,700N (+/-2%) to demonstrate equivalence

Static Leg-strength: Applied to each of the legs in turn, applied a minimum of 10mm further out than the lower end of the leg, and directed towards the centre of the frame. done by removing the rubber foot, and putting in a tightly fitting plug up to 100mm inside the leg. Height adjustment of frame must be at maximum. The standard requires a loading force for this of 300N, applied gradually over 2s, and held for minimum of 5s. but it also recommends testing at 500N, to provide a safety factor "for reasonable foreseeable misuse".

4
Structural Analysis of a Space Frame
5
How to know which modes are excited by a given input in modal analysis?
0
Solar Array Frame Design / Statics Design Problem
1
Portal frame stability
0
Question on the determinacy of frame structures