I need some help with a statics design problem. I am tasked with designing a solar panel frame to mount on a building and am the only engineer on staff so I don't have anyone else to ask the simple dumb questions. Since I have no real experience doing wind load calculations I figured I would assume a load normal to the solar panel face. My idea is to use two square aluminum tubes mounted along the long side of the three solar panels stacked vertically along the tube. My analysis involves the support structure for one side, of one array column. As of right now I am hoping the solar panels themselves will suffice as cross-member connections. The details really don't matter, in fact the wind loading really doesn't matter either. It is the method I am having trouble with.

I know I need to determine the reactions at each pin joint, do shear and moment diagrams and then I will do a buckling failure analysis on each support strut member. Any guidance would be appreciated, started doing some calcs on my own and things just weren't coming out right. 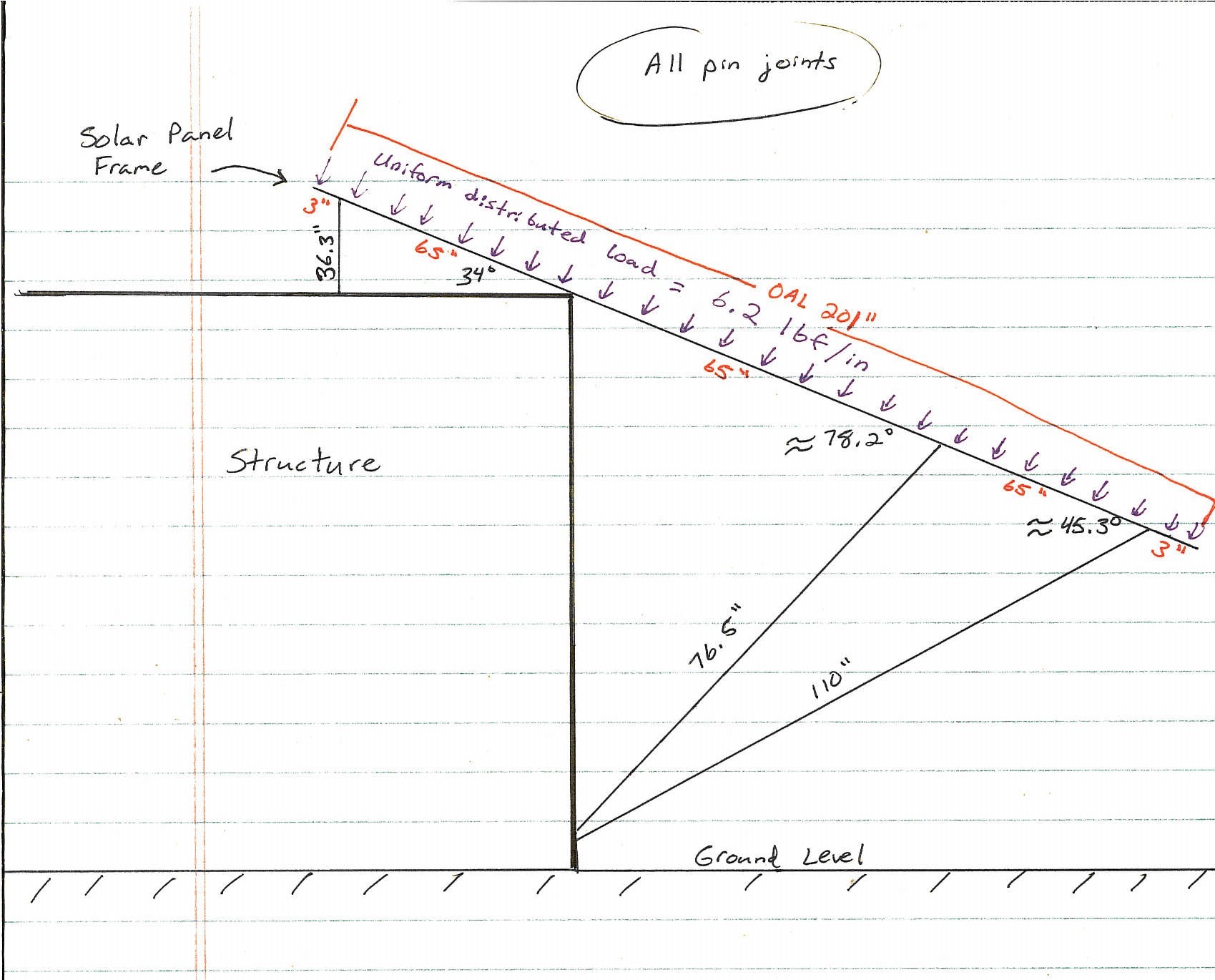 Often times your assumptions make a bigger difference than the rigor of your mathematical analysis. Remember you should select assumptions that favor an easier analysis.

Also remember that the guys your hire/employ to make a simple structure like this are not going to measure things to the .1 degrees; their tools don't even support that. These are probably pinned connections, so only lengths are needed, but keep that in mind and leave those numbers off the mfg print.

Don't put your structure right up to the corner of the building; give yourself a standoff. If there are any errors in length they will not be easily corrected.

Not sure if your location has snow, but often times snow load will be greater than wind load. Wind loads are horizontal except when around other structures like in your situation. The two highest loads left to right and right to left could actually be lifting the panels up due to the captured air pocket; so look at that scenario also.

Having built solar hot water and solar PV mounts, I do not recommend using the panels to hold square or take any load between the other supports. The structure should bear all the load and the panels should be attached per the manufacturer recommended method (that also covers you if they do break).

If it were my design, I would select a large enough primary beam (201") such that it can handle the chosen load with just two supports. One at a standoff, say 6" up from corner of the building, and another selected such that it is a symmetrical connection point based on your desired mounting configuration. Basically the only optimization you have to do is figuring out the amount of cantilever to amount of span. Simple designs are easier to calculate, easier to optimize without a computer, and easier to manufacture. Unless you need to split hairs for low mass designs like in aerospace, your materials are much much cheaper than labor.

Just FYI I was able to solve my design using RISA 3D. This is an excellent software! Ended up designing for a 125 MPH / 40 PSF wind load. Tested the frame in both horizontal and 50 degrees from horizontal orientations. Test loads were applied normal to the panel face and parallel to the ground in two different scenario groups. Loads were applied downward on all panels at 40 PSF, upward on all panels at 40 PSF, combination load: upward on the top panel / downward on the two lower panels, and the reverse of that combination load.

For the moment I am neglecting snow loads based on the fact that as you move north the required solar panel tilt angle becomes greater up to about 45 degree slope. And where the solar panel array would be most vulnerable (near horizontal) is in regions with zero snow load. But I will have to revisit this topic later.

Ended up using 6061-T6 3x2.03 I-beams for the long side members. Was even able to eliminate two support struts in this configuration.

Vortex shedding may be a problem however depending on how the assembly of frames is arranged. Structure frequency is 7 to 77 Hz for the first five modes. Based on the Strouhal number vortex shedding frequencies could range from 11 to 26 Hz. However when I analyze the shedding frequency across the assembly of all six planned frames the range drops to 2.2 to 2.7 Hz. Some type of vortex suppression devices may be required on the long struts. 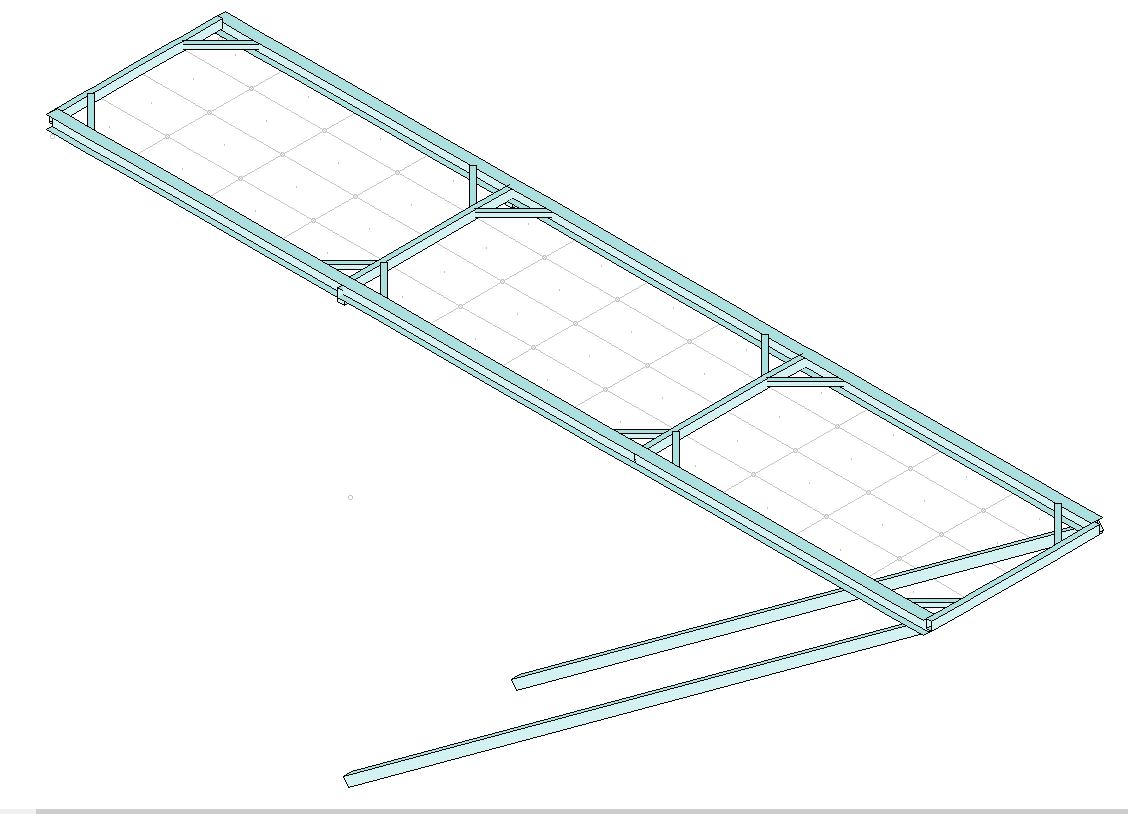 1
Frame/truss problem with sliding joint
4
Accidental Torsion and Equivalent Static Load for an irregular structure
4
Structural Analysis of a Space Frame
1
How to model a UDL over a plate for bending?
1
Statics Two Force Member Problem