Let there be a spring as shown. And this is stretched to point C and released, then force exerted by spring on mass in region X2 is "- kx" . But This springs gains kinetic energy at mean position and moves till P. Could you please tell me the force expression (force produced by spring on mass) in X1 region i.e., at pt. A at some distance x. Assume suitable variables and massless mass attached to spring. 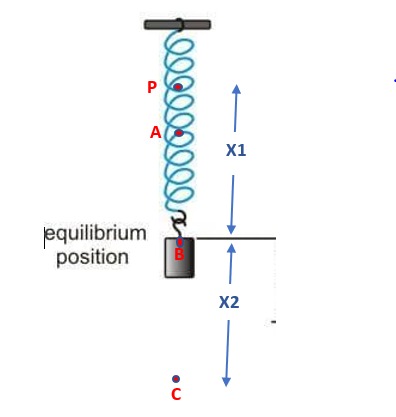 I think you meant to say the spring is massless, correct me if I'm wrong.

Force on the mass by string if we assume down direction as positive ( to follow your sign -kx pulling up) is $kx, \ $ it is pushing the mass down.

At the same time, the force exerted by the mass on the spring is $-kx$.

The mg component is permanently pulling the mass down and as far as inertia it doesn't come into play. All it does is moves the equilibrium position down by an amount $$x_{equilibrium}= \frac{mg}{k}$$

And the mass is experiencing two forces $mg+kx$

Usually, we set the reference point at the end of the string where it attaches to the mass by the hook, not at the middle, but it doesn't make a difference.

Because the first term ($m\cdot \ddot{x}$) is usually considered inertial force then what you are after is:

3
How much force does a lock's pin have due to the spring?
1
How do the springs really work in my design?
6
What is the equivalent moment of inertia of a two-pivot pendulum?
3
Approximating a Gimbal using Springs and Dampers
1
Convention for spring symbols with lateral force
0
Calculate forces/ torques on a parallel spring array
0
Choosing a Constant Force Spring
0
What would the tension in the cable be?
0
Force Transmitted to the support (Vibrations)
0
Net force exerted by spring