How do the springs really work in my design?

I'm designing a machine to test a static object (I'll refer to it as A)'s resistance to deflection due to impact force. 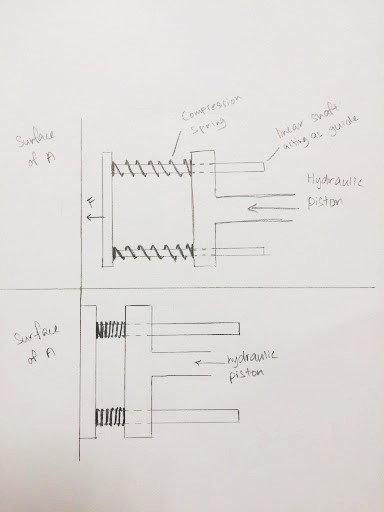 This design uses a pneumatic(probably wont be using hydraulic) cylinder to apply the impact force to the surface of A. (However, if I were to use the pneumatic cylinder alone to apply the force, I would have to position the surface right at the end of the piston stroke. If I allowed the piston stroke to be slightly more than the distance between the two to completely apply the force on the surface(overexerting the cylinder), I will damage the cylinder over time and reduce its lifespan.)

Hence, I added an extended head to the piston end with the use of springs and linear guides(shafts) within it. In my head, I picture it as the head exerting the impact force(F) first at a pretty high speed and then when the head stops at the surface of A the springs absorb the remaining of the piston stroke.

However, I have some concerns too so I'm hoping some of you more experienced and knowledgable people out there can help.

It seems to me you've made quite a mess of what is being exerted, measured and absorbed.

Surface A receives impact of certain force exerted by the inertia of the head plus (low, probably negligible) tensile strength of the expanded springs.

It's definitely not proportional to acceleration of the piston - the acceleration, and the force exerted by the piston against the head is; but that is before the contact and far, far less than the impact force.

The actual force is proportional to DECELERATION of the head, as it hits against the surface, and to the mass of the head. Since the deceleration upon impact lasts milliseconds and speed goes to zero from a considerable value over such a short time, the force exerted is much higher than subsequent force from the spring pressure.

The problem here begins in that the force is highly non-linear. As the surfaces touch and begin the compression, the force is much lower than when the depression/deflection of A (and the head) reaches maximum. And even then it changes as the pressure wave only begins travel through the medium, and pressure (=force) drops despite the object still yielding to the impact.

You could calculate the average force during the impact by measuring the time of the impact (e.g. with high-fps camera), but in reality it's not the force you should be measuring...

What you should be measuring is the impact energy. And that's pretty easy: $ {1 \over 2} m v^2 $ with mass of the impact head for m, and its speed right before the impact as v. This is the primary, most informative piece of data about the impact. Speed is secondary, as different materials react differently to varied speed impact of the same energy (e.g. metal dents/bends/rips at low-velocity, but splashes at extreme speeds). If the behavior doesn't vary much within reasonable speed range, it's omittable. Another piece of data would be the impact surface; a piercing point will behave differently than a blunt ball or a flat block. You might want pressure from a static force. But force alone, in impact measurement isn't all that helpful.

In measuring response to impact you really want to be using a system where the kinetic energy of the impactor is well known and very repeatable.

It's also important to realise that in most cases impact testing will be destructive, or at least semi-destructive as it's only in what would normally be considered failure conditions (eg plastic deformation or fracture etc) that there is a meaningful difference between an 'impact' and a static force, which is a different situation again from measuring dynamic frequency response.

The most straightforward way to give an impactor a consistent kinetic energy is to have it fall a measured height under gravity, either dropping straight down (for a vertical impact) or as a pendulum arrangement (for horizontal impact).

There are circumstances where pneumatic actuators might be used (for example in ballistics testing) but these are generally used more like a gun to fire a free projectile at a target than as conventional linear actuators and in this case you would be considering the air pressure used as the energy source. In this sort of situation it is also common to use high speed photography to make accurate measurements of velocity and displacement.

The problem with using a hydraulic actuator is that there is no straightforward way to accurately measure its velocity at the point of impact.

The other issue is that impact testing tends to be very context specific as there are several possible different modes of failure which depend on several interrelated factors. For example even when the impactor has a known kinetic energy you can get different results between a high mass at low speed (eg a a big hammer) and a low mass at high speed (eg a bullet).

So with this in mind it is almost always most useful for impact testing to reflect as closely as possible the real world situation that you are trying to model.

Not the answer you're looking for? Browse other questions tagged mechanical-engineering design springs or ask your own question.

3
Pneumatic cylinder force output and impact energy
3
Specification of linear speed dampers
2
Bearing and Bearing Housing for Said Design
2
Design Input: Rotary motion to Linear motion, What system should I choose?
0
Is there any mechanical engineering solution that employs 'ankling', as per a cyclist's ankle/foot/pedal setup?
1
Why does the ball detach from the surface of cup?
1
Is there a mechanism that allows this kind of piston/plunger movement?