Is the calculated shear strain in a beam, engineering strain or tensorial strain?

Recently I came across a FEM code of a linear deformation beam element, and it made me wonder what is the correct relation between shear stress and shear strain in a beam element.

Usually beams have free faces without stress, so the equal shear stresses assumed for an infinitesimal element with small deformation concept is not applicable here. That is the shear stresses change along the height of the beam and thus we need a coefficient to account for these changes. A common solution is that the cross-section area is modified by a beam shear coefficient and a shear area is defined: $$A_s = coef.A$$ So now the shear stiffness, that depends on the area, is also modified by coef.

On less common cases where a similar element is used to simulate a volume (like a lattice network model), I see that they use 2G instead of G (for example see equation (22) in T. Kawai 1978). This is like the idea that they are assuming that the Shear Strain is tensorial shear strain thus 2G should be used instead of G. But another interpretation can be that the coef. in this case is assumed equal to 2 since the beam does not have free surfaces.

(above image adopted from here)

Shear strain is defined as the angular deformation caused due to parallel or shearing force. In structural engineering, there are two cases of shear strains that are of particular concern. The occurrence of each depends on the loading that causes shear deformation as indicated below.

1) Shear Strain due to Pure Shear 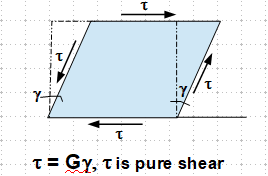 2) Shear Strain due to Shear Deformation 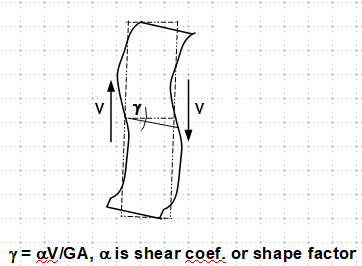 For typical beams that follow the beam theory (Euler-Bernoulli or Timoshenko), as stated above, the shear deformation is very small thus usually ignored. The measured strain is, therefore, only consisted of the horizontal stretching and shortening of the extreme fibers in the direction of the longitudinal axial axis, which I think is your case. 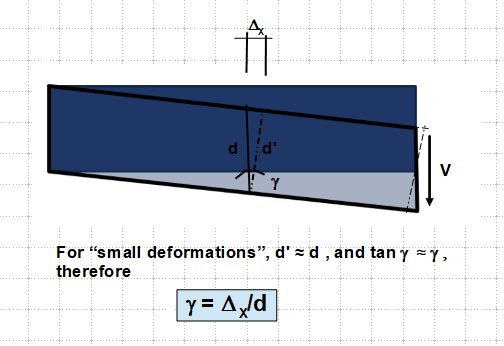 Not the answer you're looking for? Browse other questions tagged structural-engineering beam finite-element-method shear deformation or ask your own question.

6
What is the mathematical derivation for shear center of a beam?
2
Problems with shear force diagram in beam model
0
Why does a beam in shear crack at 45 degrees?
1
Maximum shear in a beam
0
Direction of Shear Stress on the periphery of a circular section beam
3
Why in a rectangular cross section beam the shear stresses are parallel to the height throughout the surface?
0
Should the stiffness of this cantilever beam be different for these two conditions?
1
Why the vertical shear stress in the flange neglected?