What is the mathematical derivation for shear center of a beam?

For me, it's a bit hard to imagine where shear center can be, and what purpose it serves. The definition I found online is very vague:

Shear center is defined as the point on the beam section where load is applied and no twisting is produced.

Given the general profile of a section, is there a proper mathematical derivation/formula that shows how the shear center is defined/derived?

Why do we care?

Because we need to know if the beam is subjected to torsion in addition to flexure.

The point in the cross section (or outside the cross section) where we can apply load and produce beam bending without twisting. Loads applied anywhere other than the shear center will produce both bending (moment) and twisting (torsion).

Generally when we think about a beam in bending, we only think about, well...the bending. But depending on how that load is applied to the cross section (i.e. is the load through the shear center), there may also be twisting. 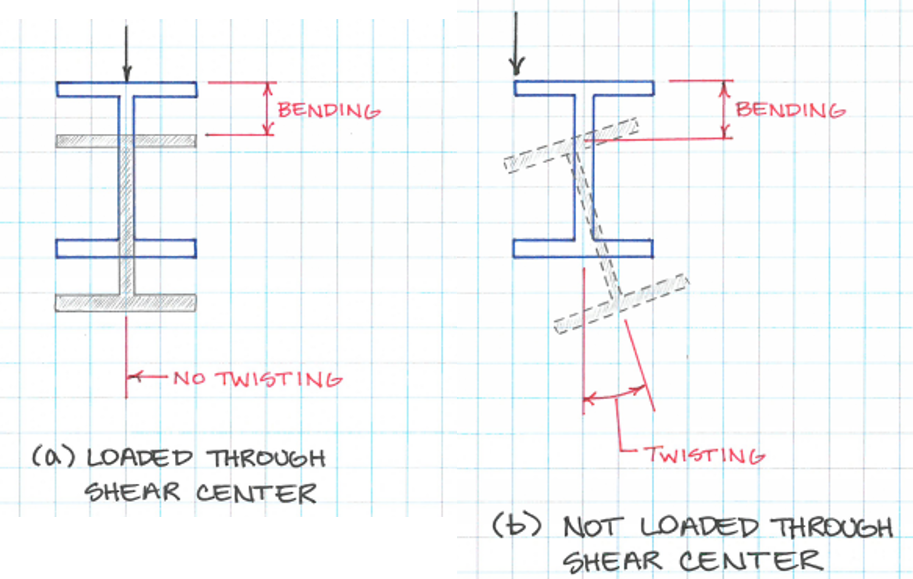 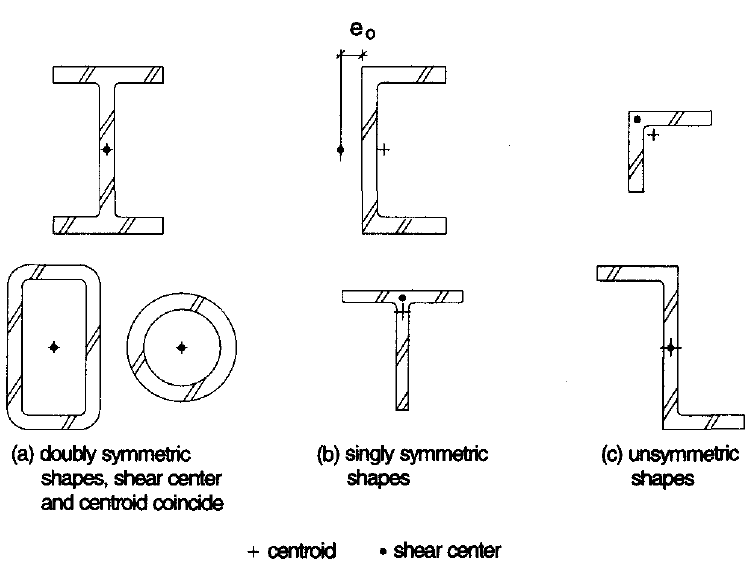 For starters, you can probably look at the two I-beam load cases above and intuitively sense that applying a load offset from the centerline will produce beam twisting.

A more quantifiable procedure is to visualize the shear flows and estimate the point about which the net moment produced by the shear flow will be zero. 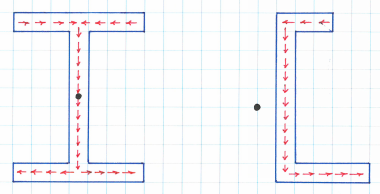 For the Mathematically Inclined

Well, I could go bonanzas with the LaTex (and I may do so a bit later), but since my lunch break is coming to an end, I'll refer you to this explanation.

5
Logic behind location of shear centre
4
Derivation of beam slope for a cantilever beam
9
Derivation of the weak form for the euler-bernoulli beam equations
1
Determine shear flow direction in profile/beam section
2
Timoshenko Beam Theory for Quasistatic Cantilever Beam: Shear Term
4
Torsion and Bending stress calculated from deflection
0
Question regarding the extreme wind velocity distribution in Eurocode
2
Is the calculated shear strain in a beam, engineering strain or tensorial strain?
0
Can the general Flexural formula be used in the case of transverse loading of a beam?