I am currently pondering modifying my laptop's heatsink and am curious whether I stand to gain any benefit at all. The CPU and GPU (similar heatsink design) reach high temperatures (90°C +) under load and the exhaust air is warm, but far from hot. So far, I have tried several thermal compounds and did some experiments regarding the way the heatsinks are attached to CPU / GPU. Unfortunately, the exhaust air is still not hot which leads me to believe that the heatsink design could be improved.

For context: the laptop uses a usual heatsink design, where a copper plate sits on top of the CPU / GPU. This copper plate is connected to a few heatpipes which lead to the cooling fins. The heatpipes are mostly round and the fins as well as the plate are flat / rectangular. Right now, the heatpipes seem to be fixed to the fins and the plate on individual spots, what looks like spot-welding.

The current design looks something like this (plate is green, heatpipe is blue, spots with connection are black):

UPDATE: I have taken the laptop apart and taken a picture of the actual heatsink, it looks like this (green arrows show where there is some kind of connection).

I did use compressed air to clean the space between the individual fins afterwards.

My reasoning is that all of the thermal conductance is achieved via those small dots where the heatpipes are connected to the other parts. As thermal conductivity relies on surface area, I was thinking about filling in the gaps to the side of the heatpipes. Hopefully, by doing so the heatsink is able to transfer heat more efficiently, leading to lower temperatures.

Unfortunately, there are very few materials or ideas that seem suitable. Under normal circumstances (e.g. heatsink application) I would rely on thermal paste - but this can't be used here as it requires pressure. While searching for some kind of epoxy or glue that is thermally conductive, I came up empty.

My best idea right now is to use Indium (can be bought easily, melts at a reasonably low temperature) for the gaps. However, as handling of molten metal (at ~156°C) is tricky, I would love to know whether my idea has any merit.

A draft of my idea is as follows:

Where green is the plate / fins, blue are the heatpipes and yellow (on the right side) are the filled in gaps.

Thank you very much for any insights or hints! (and sorry for probably mixing several terms, like conductivity and conductance)

UPDATE: I have since taken apart the laptop and tried to fill the gaps with solder. Neither Indium (melts at ~ 156°C) nor regular solder would work, as both did harden as expected but could easily be pushed off with a Q-tip. My assumption was that some kind of material on top of the surface is causing the solder to not stick - however, even when using a metal brush with a electric drill, I was not able to make the solder stick (neither on the aluminum nor the copper part). This might be due to the inidividual parts not being heated to the melting point of the solder, but trying to heating them with the soldering iron did not even make a sensible difference. Additionally, I am too careful to heat the complete assembly up all the way to the melting point of solder, if I risk that the few existing connections might break while doing so.

In the end, I did sand down my CPU's IHS to make it even flatter and have accepted that this seems to be the limit that I can hope to achieve with this device.

Mixing some kind of adhesive / glue with thermally conductive particles might be an option but this was an avenue that I did not pursue further due to lack of experience with this process.

Your are correct that the smallest surface area will be a limit on the thermal conductivity. Before we dive into that lets look at the over all approach and some other limits.

Are your temperatures typical for your laptop on forums or per manufacture? Heatsinks are just lumps of metal so you can easily inspect the quality, but heat pipes are full of a working fluid like ethanol. If they are incorrectly filled or punctured their conductivity will be significantly lower. It takes some lab work to determine if they are working or not, but just be aware of this.

My recommendation would be to purchase a replacement heat sink/pipe system for your laptop. This is two fold;

Another potential limit is the airflow around the fins. If you can increase fan speed from the software or upgrade the fan this will help. Obviously clean fins and larger areas for air passage help. Keep wires out of the air flow path when possible.

Ok to your question. Brazing/soldering may be a good solution. Indium is used in different lead-free solders to lower the melting point. I would just use plumbing solder though for cost and availability. Electrical solder would work too and may be available in a lower temperature version.

The types of metal you are brazing matter. Copper to copper will work great. Aluminum can be brazed, but it is much more difficult requiring acid preparation and aluminum specific brazing rod. Lots of good brazing videos on youtube once you know your metal types.

The biggest risk with doing this is that it is possible to damage and or rupture the heat pipes. They are little pressure vessels and will pop under high temperature. Might be okay at that temperature, might not. It is a safety issue; use face shield, glasses, gloves, and bolt it down before heating.

Epoxy with fillers has pretty terrible conductivity compared to metal, but its much better than air if you aren't willing to risk failure of the unit. As long as you don't contaminate the chip mating surfaces; it will either be better or the same. Buy some silver powder and two part 60 min epoxy. Use as much silver powder as the epoxy will wet. Put all the ingredients in the corner of a ziplock bag, evacuate the air, and mix by squeezing back an fourth. This minimizes the amount of air (insulator) in the mix.

Most of the heat pipe units I have seen use a compression assembly (see photo below). Another bit more extreme option, would be to buy a heat pipe/sink system that is close to what you need, then bend the heat pipes and mechanical modify it as need. On the plus side you don't have to damage your currently working unit. Good luck! 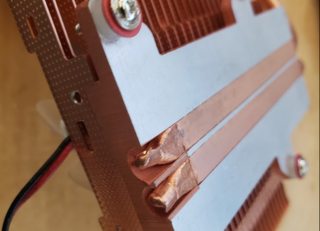 Not the answer you're looking for? Browse other questions tagged thermal-conduction computer-hardware heatsink or ask your own question.

13
Does good electrical conductivity imply good thermal conductivity?
2
Insulator thermal resistance
1
Thermal Conductivity? Units On a Data Sheet
3
Powder form of material with high thermal transfer
0
Wire heating and heat transfer in a cylindrical pattern
2
Most efficient orientation of exhaust vents on top plate of chassis for air flow with regard to heatsink fins?
2
Why does the thermal boundary layer(TBL) thickness increase with decreasing Prandtl number?
0
What happens in Thermal boundary layer in a flow with cooled plate?