Deformation of a fixed-fixed beam with perfectly plastic yield stresses

The problem asks to find the relationship between the force $P$ and the displacement of B ($u_B$). I have done this correctly:

Now imagine that members AB and BC both have yield stresses ($\sigma_{Y_1}$ and $\sigma_{Y_2}$) and are perfectly plastic after yield.

I need to find the relationship between $u_B$ and $P$ in the following cases:

I'm having trouble finding explicit expressions for $P_{y_{1/2}}$ and $u_{Y_{1/2}}$. I'm not quite sure how to relate yield stress to elongation and displacement of the members.

To be honest, this problem has tied my brain in a knot and I believe my conceptual understanding (or misunderstanding) of the problem is limiting my ability to solve it mathematically. Any help at all would be greatly appreciated!

Edit: Here is the exact problem 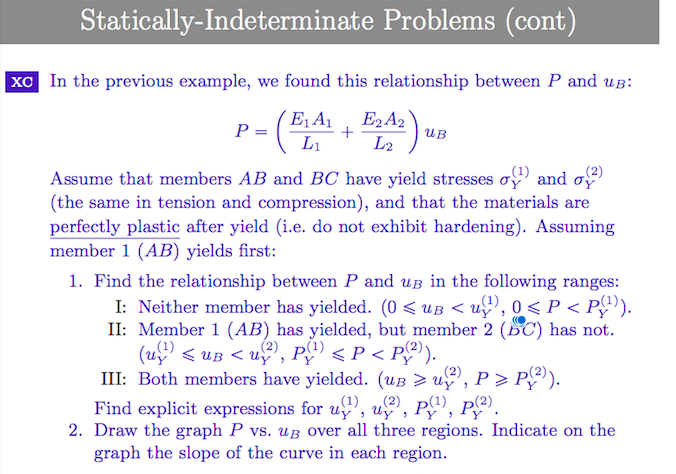 From Hooke's Law, we know that

This is valid up until the yield point. Considering a perfectly plastic material, the deformation $\epsilon$ is constant after the yield point, which gives us the following graph: 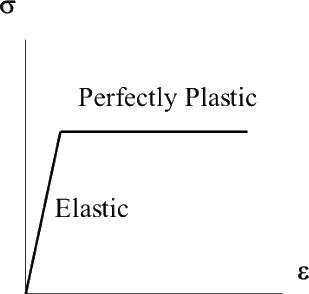 So, to answer your question, what is the value of $u_{Y_1}$? Well, it is equal to the displacement under the yield stress:

Now, for the rest of the question, I think it is worth expanding your equation:

This is equivalent to

(where $\sigma_1$ and $\sigma_2$ are variables and proportional to $u_B$) which means that the force applied is equal to the sum of the forces applied by each member, which each are equal to the product of the stress and the area of the member. Keep that in mind.

Now, the question states that we can assume that AB will become plastic first. So we know that the situation will change when $u_B = u_1$. In this case, the equation above will change to

As the force increases, $u_B$ will eventually reach $u_2$, at which point BC's collaboration will also become a constant and equal to $P_{Y_2}$, so we have

This tells us that once both members cross into the plastic region, the deformation will tend to infinity.

So, there's your answer:

Which gives you the following behavior (the red line shows AB's contribution and the green, BC's; the black is the entire structure's resistance and is equal to the sum of both lines): 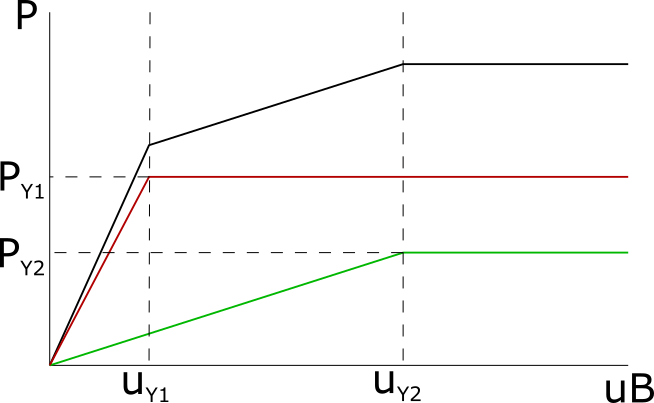 Not the answer you're looking for? Browse other questions tagged structural-engineering statics stresses or ask your own question.

3
Calculating stresses of section with varying depth
2
Maximum deflection of a beam with both ends fixed and distributed load
4
Difference between 'plastic yielding' , 'plastic yield strength', plastic strength' and 'plastic stress'?
1
How to incorporate moment release at beam end in FEM formulation?
1
How to find the reaction forces, moments and the displacement of the fixed beam with a link?
1
Locations of max stresses in a circular beam?
2
Why isn't von Mises criterion valid when compressive and tensile yield stresses differ?
6
Yield properties of plastic material
2
Does perfectly elastic and perfectly plastic material make any sense?