How do cyclonic vacuum cleaners maintain collection efficiency with constant motion and changes in orientation?

Anyone used to doing housework has probably noticed that vacuum cleaners come in both "bagged" and "bagless" varieties. If you're of a certain age, you may have noticed when these "bagless" vacuums appeared back in the 1990s. Though I didn't recognize it at the time, these "bagless" vacuums are an example of a technology I would later study in my undergraduate career, called cyclonic separation. This article from The Guardian talks a bit about the Dyson* company's introduction and application of cyclone technology in vacuum cleaners, and makes the claim that the newest models separate "even the smallest of particles" without filtration (i.e., entirely by cyclonic separation).

Given my experience with cyclones, this is quite an impressive claim. Though widely used to deal with coarse and medium-coarse particles, industrial cyclones are typically incapable of removing fine particulates, including many of the "allergens" that Dyson claims their vacuums now remove, without additional filtration of the exhaust.** In the area of air pollution control, cyclones are often regarded as "pre-treatment" devices for this reason, and because they are more durable and cost less to operate and maintain than e.g. baghouses, wet scrubbers or electrostatic precipitators.

What makes this even more impressive to me is that these vacuums are portable; not only do they move around as you clean, the body of the vacuum tilts up and down. In handheld applications, from what I understand, they can even be inverted! I don't understand how a cyclone would continue to function in this situation. I would expect a sharp drop in control efficiency (or in plain terms, a lot of dust in the exhaust).

Typically, a particulate-laden gas enters tangentially near the top of the cyclone... The gas flow is forced into a downward spiral... Centrifugal force and intertia cause the particles to move outward, collide with the outer wall, and then slide downward to the bottom of the device. (p. 135)

In this configuration, gravity causes the separated particles to fall into the hopper, where they are segregated from the air stream and can later be removed. This EPA inspection course handbook shows three inlet configurations (two tangential and one axial); in each case, the contaminant falls downward into the hopper under the influence of gravity.

Wikipedia cites an article describing horizontally-oriented cyclones utilizing "a powerful secondary air stream to direct collected material toward the collection hopper," something that is not included in the traditional vertical design. The article includes the following illustration: 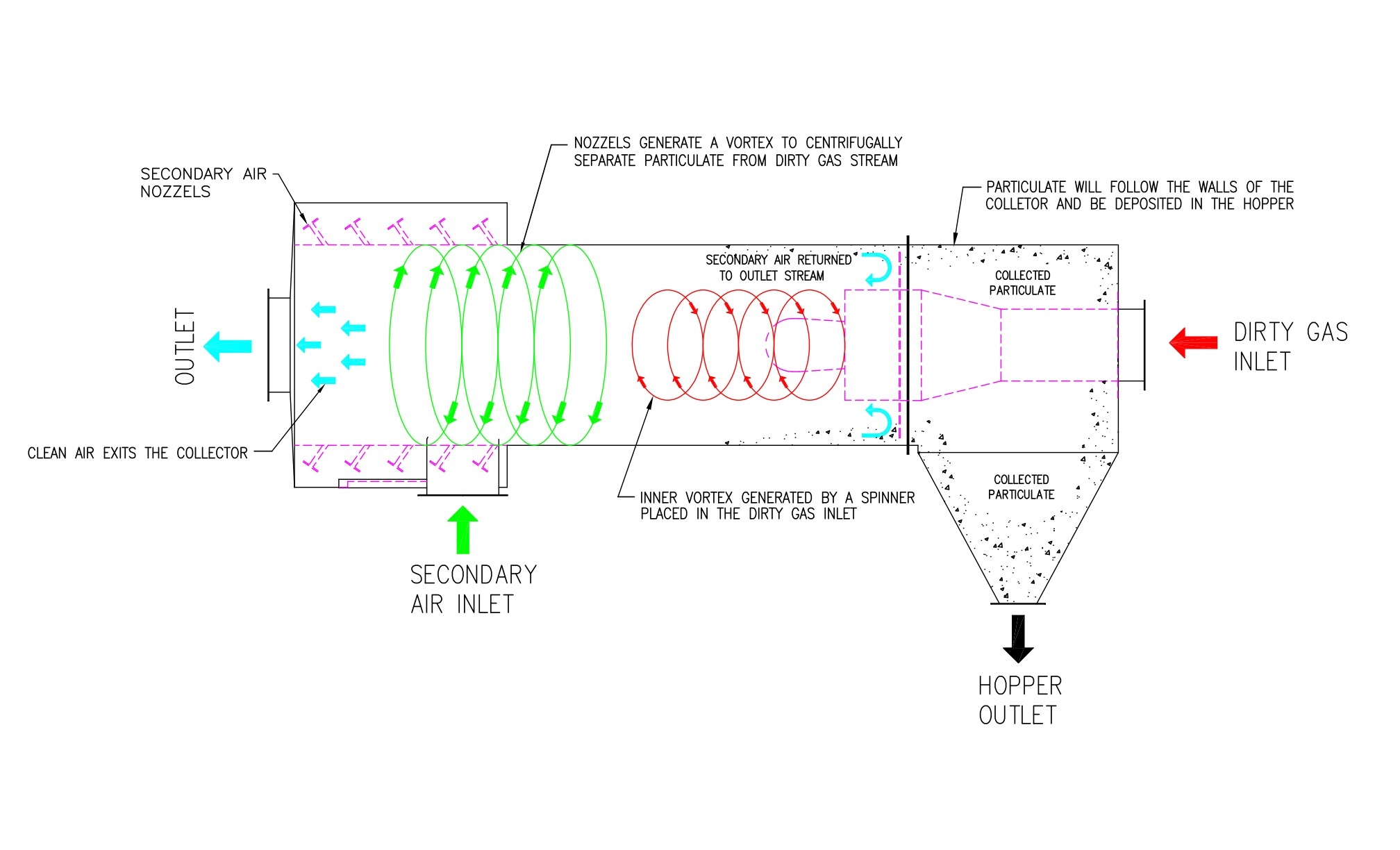 Every industrial cyclone I've seen "in the wild" has been configured vertically—in fact, I had never heard of a horizontal cyclone before researching this question. In either case, the dimensions of the device must be carefully determined to provide optimal collection; the Cooper & Alley book gives the following theoretical equation for the diameter dp of the smallest particle that should be collected with 100% efficiency:

The remaining parameters are density and viscosity of the gas and density of the particle (these do not depend on the design of the cyclone). The number of effective turns is determined by:

Particles with diameter less than $d_p$ are collected with decreasing efficiency.

The point of all this background information is not to bore you, but to demonstrate how the dimensions of the cyclone—including height, length and width—determine the overall theoretical collection efficiency. These equations explicitly assume that the device is vertically oriented and implicitly assume that it is stationary; the latter is never stated in the book, but every illustration and description is of fixed devices in industrial applications, so I think it's a very safe interpretation.

I expect the stationary aspect is important not just because it's standard in industry but because of the importance of maintaining cyclonic flow. One comment points out that accelerating the cyclone horizontally will help 50% and hurt 50% of the entrained particles. The issue I have with that is that under ideal operation, the claim here is near complete control; there is no further benefit of "helping" some of the particles. Any acceleration that counteracts the separation will add contaminants to the exhaust stream. Not only that, if the flow pattern changes, the number of effective turns Ne will change. A reduction there implies an increase in the cutoff diameter and a decrease in control efficiency, even if only temporarily.

Dyson's technology is proprietary; even if one of their engineers or researchers finds this question, I don't expect a detailed description of how their device works. Also, there are many other brands of cyclonic vacuum cleaner on the market today; I don't want to frame this question as specific to one brand's technology. What I'd like to know is how can a cyclone maintain efficient operation in conditions involving constant, unpredictable motion and variable orientation?

* Disclaimer: I have no relationship with this company or any of its vendors.

** The implication here is that other models of cyclonic vacuum (including models sold by other manufacturers) do provide additional filtration after the cyclone. I can't tell how much of this is marketing copy designed to make Dyson's technology look better than it is.

You are essentially asking, "can a cyclone be designed that works without, or against gravity?" and the answer is, of course, yes. Most practical industrial designs can use gravity to increase efficiency or reduce cost, and the equations you've seen need this simplification, but a cyclone doesn't depend on gravity. You just need to whip the air around fast enough that the larger particles can't make it into the smaller diameter exit. Orientation is irrelevant when you've got high rotation rates, and the powerful air pumps used in the Dyson vacuums can produce very high rotation rates.

Further, the vacuums are multi stage cyclones. Even my old Dyson has at least two stages, one big obvious cyclone, and then a bunch of tiny cyclones which are designed for the smaller particles.

Notably, mine does have a two stage air filter after the cyclones, but I'm sure the newer models with their even smaller second or third stage cyclones and more powerful motors are even better with smaller particles. I would be surprised if they could get a HEPA rating on a cyclone-only design, though, so I'd be wary of their marketing.

If you look at the first stage, you'll find that inverting it has only one effect - the trash comes to the top rather than the bottom.

But it still doesn't enter the smaller diameter exit tube for that stage. The particles weigh too much, and the spinning wind prevents them from ever leaving the edges of the container.

So while some industrial cyclones and those you've studied all rely on gravity for some portion of their rated design, that doesn't need to be the case at all.

Lastly, continuous changes in orientation simply don't matter that much. I'm sure they do affect it, but the speed of change from one orientation to another is very slow relative to the speed of the spinning in the cyclone. Energy is lost, perhaps a few more particles get through that wouldn't otherwise get through if it were held stationary, but they are caught by the next stage, and this would only happen to those particles that are closer to the size the next stage is designed for anyway.

I'm betting that a big part of the discrepancy here lies in the duration of operation. Industrial separators are intended for long term continuous operation, while home cleaners can stand to shut down frequently to be emptied.

The act of separating particles is accomplished centrifugally, neither gravity nor a secondary air stream are required. The issue at hand is how to deal with the excess of particles accumulating on the outer walls of the chamber. In the short term you don't need to do anything special to keep particles from getting into the exhaust but an excess of dust and lint will eventually clog the system. The industrial systems are specifically designed to deal with this problem in the long term (as you've indicated). The home systems can probably get away with intermittent loss of gravity before too much gunk collects but I don't think that you can run one of these home vacuums fully inverted 100% of the time and expect it to operate correctly for as long as it would if it were oriented normally.

I'll add that (from a perusal of image searches), it appears that the designers made an effort to direct the air downward as it enters the first cyclone. This may have an effect of pushing accumulated dirt in that direction (much as the secondary stream does in a horizontal design), so that gravity isn't the only force driving the dirt "down".