And for resilience, is it integration from 0 strain to 0.2% offset strain of the yield stress with respect to strain please?

Strain is determined as $\epsilon = (l - l_o)/l_o$. The 0.2% offset strain is the point where $\epsilon = 0.002$. The 0.2% offset stress is determined by using a line that has the same slope as the initial stress strain ... the initial Young's modulus. In materials that are fully elastic up to and beyond this point, the initial slope remains constant. In some cases, the stress-strain curve has a curvature to it. Polymers are an example where the modulus changes as a function of strain.

A plot below shows these concepts graphically. 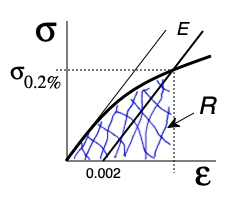 Not the answer you're looking for? Browse other questions tagged materials material-science or ask your own question.

3
Why is the Poisson's ratio for isotropic 1/4 and the maximum value 1/2 (when there is no net volume change)?
4
Why is strain also normalized to the parameters of engineering strain?
4
How does a graph with tensile stress-strain curve and compressive stress-strain curve superimposed look like involving true stress and true strain?
4
Does unloading beyond yield point also affect tensile strength?
4
Why 0.2% of strain is considered while taking proof stress?
3
stress curve in the notch effect?
1
Stress yield of a specimen, result confusion
0
How to find yield strength and Young Modulus from S-S curve