Why is strain also normalized to the parameters of engineering strain?

I get that you normalize stress to engineering stress, so that it is independent of the cross sectional area. This means you can calculate (roughly) the stress needed to elongate the specimen to the degree you want. But why normalize the strain aswell?

For example you have a specimen, with orginal length, of 60 mm and 100 mm and then you want (l-lo) to be 2 mm. I would have thought that it would take same amount of engineering stress. And that a 2% strain would lead to different stresses needed, since in one this means an elongation of 1.2 mm and with the other an elongation of 2 mm.

From what I understand of the question, there are three interlinked concepts that are causing confusion, each of which could be a separate question.

1. Is axial stress dependent on length of a specimen?

2. Is axial strain dependent on length of a specimen?

Axial strain is independent of length. This follows from the answer to (1.) above, and from Hooke's law, specifically that

so that if $\sigma$ is independent of length, so must be $\varepsilon$ since they are linearly related.

3. Is axial deformation dependent on length of a specimen?

Axial deformation is dependent on length. It also depends on cross-sectional area (assuming constant cross-section) and tensile modulus. This follows from a quick and dirty derivation of the axial deformation formula. Consider a constant-cross-section tensile member of area $A$, length $L$, experiencing a uniform load $P$, with modulus $E$. The member will experience a deformation of $\delta$. Note that by definition $\varepsilon = \delta / L$ and $\sigma = P / A$.

and substituting our notes gives

which after some rearranging yields

How Can I Think About This Intuitively?

Elasticity is just like springs, and indeed Hooke's law is also used for linear springs. Now consider two springs such that one has twice the number of coils as the other, but the rest of their parameters are the same. Assume they are also weightless. If you held just the end of each spring, hooked identical weights to the other ends and let them uncoil toward the floor, the spring with twice the number of coils would extend twice as far. As a result, the change in length per per unit original length, equivalent to the strain, would be the same.

How Can I Use This Information?

Now suppose instead you have a family of tensile rods all made of the same material. If each must not deform more than 1 mm, then the longer rods must have a larger cross-sectional area to make up for the additional "slack" from their added length.

What About Plastic Deformation?

The above three questions only apply in the elastic regime. In the plastic regime, volume is practically conserved in most materials, which means that any instantaneous extension of a tensile specimen must cause an instantaneous reduction of area such that the volume gained by increasing length is equal to the volume lost by reducing the cross-section area.

Beware! Necking does not necessarily proceed the same way in polymers. In polymers, necking is associated with polymer chain alignment, which locally strengthens the material so much it prevents further deformation there, unlike metals. Instead, the neighboring regions begin to neck causing them to strengthen, and so on, until the entire specimen becomes aligned.

Indeed, deformation is a function of an element's length. The longer the element, the lower the stress required to obtain an equal deformation. This is because stress is proportional to strain (adimensional, such as 2%), not to deformation (such as 2 mm).

Imagine you have two objects: a crystaline structure composed of nine iron atoms ($\alpha$ allotrope), and a twelve-$\alpha$-iron-crystal-long strand. Both can be seen below. You apply the same tensile force $F$ to each of the objects in the horizontal direction. 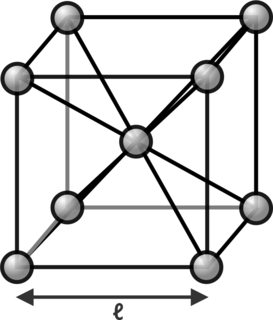 Now, what does it mean when an element is stretched? It means that all of their constituent particles and their chemical bonds are stretched. The single crystal deforms by some very tiny value $\delta$. The "chain" however, transmits this same force $F$ along each of its constituent blocks, such that each of them also deform by the same value $\delta$ as the single crystal.

15
Why do we even use engineering stress?
3
Why is the Poisson's ratio for isotropic 1/4 and the maximum value 1/2 (when there is no net volume change)?
4
How does a graph with tensile stress-strain curve and compressive stress-strain curve superimposed look like involving true stress and true strain?
5
Do all ductile materials experience necking before fracture?
10
Why does the stress-strain curve decrease?
4
Tensile Test Necking Location
0
Mechanical properties of tin base alloys
2
What is the difference between work hardening and strain hardening?