What is "per unit strain"?

When I read about stress analysis and specifically in the context of strain gauge, I often see the phrase resistance per unit strain or voltage per unit strain. I understand the electronics and how some of the equations are derived or come about. I have a basic understanding of what stress and strain are, but I don't get what per unit strain is and why we're using it.

Everything makes sense until the equation is rearranged and call it the potential drop per unit of strain:

One unit is a measure of unity. One unit of strain therefore is $ \epsilon = \Delta L / L_0 = unity = 1 $. That implies $ \Delta L = L_0 $, or the change in length equates its initial length. If the object is under tensile stress, $ \Delta L = L $ is a 100% elongation. So the term potential drop per unit of strain would logically mean the voltage drop per each 100% elongation! Most strain being measured in the elastic region is well below a few percent. 100% elongation (or my take on per unit strain) feels .... out of context here.

While I completely agree with @NMech's answer, let me take a different approach.

As I see it, the problem is that you're forgetting something: look at the right-hand side of that equation: $IR_gG_F$. Now, I don't know anything about the subject you're looking at about voltage drops or what have you. But I'm willing to bet that if you calculate that, you'll get an absurdly high value for the drop $\Delta E$.

But then again, that makes perfect sense. After all, you're right: a "unit strain" such that $\epsilon = 1$ implies 100% elongation, which is also an absurdly high strain!

If it helps clear things out, replace the word "unit" with "step". Then define what your "strain step" will be. For every step of $\epsilon = 1$, you'll get a really big step up in the value of the drop. But if you take steps of a more reasonable $\epsilon = 0.0001$, then you'll get reasonable steps up in the drop.

If I understand correctly, your question is "Why do we use a unit strain instead of something more meaningful like a percent strain?".

The reason is that we are normalising with respect to a well-defined (and easily comprehensible) quantity. This is a very common theme in material science. 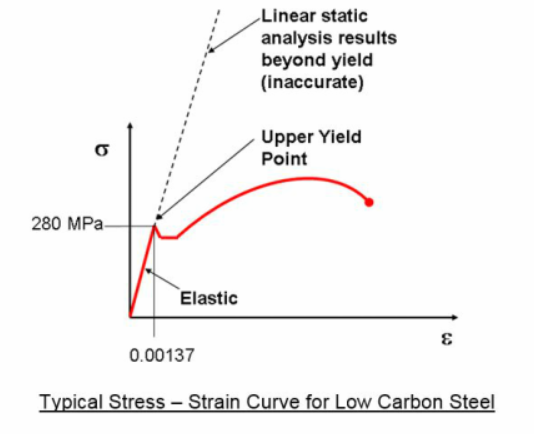 The graph above exhibits the relationship of the modulus of elasticity (dotted line) with the actual stress–strain behaviour of low carbon steel.

My point is: although the physical interpretation behind the modulus of elasticity value could be described as nonsense, it is (in all probability) the most sought-after property in structural analysis problems (even more so than stress because there are so many variation of stress: yield stress, failure stress, shear failure stress, etc.).

NOTE: I am not certain that I 100% got your question (excuse the pun), so please comment if I misunderstood, so that I delete or update.

NOTE 2: when dealing with such high strains, the concept of true strain (vs. the commonly used engineering strain) can alleviate/correct some of the problems I highlight (see erasure from existence and negative matter in compression).

UPDATE Upon seeing Jonathan R Swift's comment, the following thing came to me, which might be relevant to the question, i.e., the use of per unit strain.

Strain is a nondimensional number. As a result, when you are dividing the voltage drop $\Delta V$ by strain, the units are the same as resistance. Therefore, *the use of "per unit strain" emphasizes that the resulting value $\frac{\Delta V}{\epsilon}$ is not in [volts] but in [volts per unit strain]**.

I don't get what per unit strain is and why we're using it.

When you have a quantity expressed as "per unit (of) X", you get two things.

First, you can recover the value of the quantity for any X by just multiplying (assuming that the relationship is linear). That's what multiplication does - it just scales some base value up or down. So you can express some relationship that's relative to X in a more universal way by fixing the quantity to the value it would have if X were 1, and then using that as a multiplication factor (the slope). So you're designating a particular value to be the reference value.

This is what the term "scalar" should be evocative of.

So the term potential drop per unit of strain would logically mean the voltage drop per each 100% elongation! Most strain being measured in the elastic region is well below a few percent.

It doesn't matter if X actually obtains the value of 1 in practice. What matters is that the mathematical relationship is correct.

Take the spring force equation (Hooke's law): $F = -kx$. The spring constant describes force magnitude per unit displacement - letting you recover the value for any displacement. It doesn't matter whether or not displacements of +/- 1m make sense for that particular spring; there's a range of values where the model is applicable. 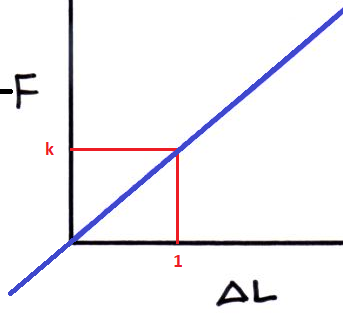 You can also invert it (take the reciprocal) and use it as "displacement per unit Force", to infer the actual displacement if the force is what you can measure. So "potential drop per unit of strain" and it's inverse let you recover one or the other depending on what you can measure, by just plugging in the measured number - as long as you can assume the linear relationship.

The second thing you get is the ability to do comparisons in a normalized way. E.g., you're not interested in absolute values, but instead you want to compare two things relative to each other, or to some "standard" - "per unit X" can fulfill that role. E.g., you can compare the strength of the gravitational force (of two different stars) per unit mass (a 1kg "test mass"). Or the stiffness of two springs. Or the sensitivity of two strain gauges.

3
What is the unit of measurement of fatigue damage in a structure?
1
What is strain hardening exponent?
0
Measuring wire damage using strain gauges
1
energy unit conversions
2
M# Screw mm per turn?
0
What is the linear strain for given lateral strain?
4
How to reconfigure a control box unit for an SCN5 actuator