If an aircraft's wing blows air downwards, how is the momentum conserved in level flight?

An aircraft's wing generates force of lift by directing the oncoming airflow down. How is this momentum balanced when the aircraft is not climbing, but maintains level flight?

The rate of change of momentum has units of force. By tilting down the momentum vector of the air flowing past the wing, the wing experiences an upward force. In level flight, that upward force balances the force of gravity on the plane's mass.

Lift and gravity are "balancing" forces, just as thrust and drag.

The engine provides energy to the system. When there is a "surplus" of energy, it is converted to lift and speed. There is a statement in the aviation world, "The throttle provides, the elevator divides." As power is increased, if one desires to maintain level flight, the elevator is deflected appropriately, and the speed will increase.

Depending on one's perspective, some of the lift is generated by a reduction of pressure above the wing surface. This also applies to the above statements. It is not necessarily all deflection downward.

The angle of a typical wing in flight is slightly greater than zero. So the wing/airfoil deflects the air downwards thus creating the necessary Lift for keeping the airplane up. 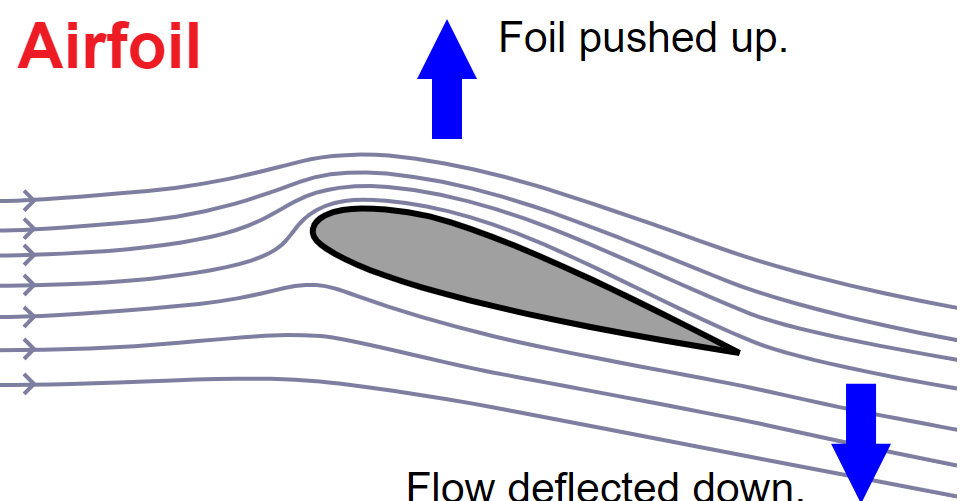 Regarding the momentum, in order for the air to change direction because a force is applied on it. Due to the Newton's second law of motion, an equal and opposite force is applied by the air on the foil. That force is the aerodynamic force, which is decomposed to lift and drag. 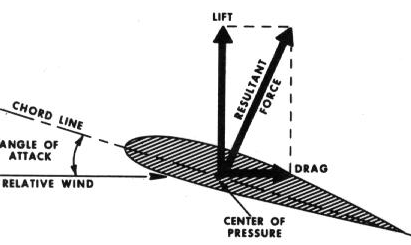 In order for the plane to maintain height and speed, the following forces are at equilibrium: 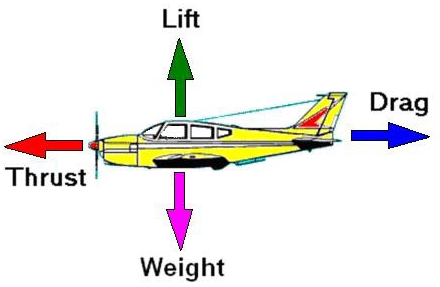 In the 2D flow model
When you consider a large control boundary around the wing, all the vertical moment vanishes in the flow. Behind the foil a sufficient distance, the flow is once again perfectly horizontal - it's identical to the upstream flow. This is because the flow field is modeled as the sum of two items. The first is the farfield flow - straight, uniform flow from front to back. The second is a circulation flow. From a distance, this looks like a circular vortex centered on the wing, and the velocity trends to zero as you get further away. All the vertical momentum terms in the flow are contained in this circulation flow, and there is as much going up in front of the wing as there is going down behind the wing.

The combined fields yield a force on the wing, due to the different velocities and pressures on the top and bottom surfaces of the wing. But there is no work being done because there is no translation in the direction of the force. And there is no momentum change in the fluid mass taken as a whole. The flow far downstream is identical to the flow far upstream. This is true not just in steady state, but in startup and slowdown as well.

In the 3D flow model
Things get a bit more complicated. Here, there is a change between the upstream far field velocity and the downstream far field velocity . But just as in the 2D case, there is no energy exchange between the wing and the flow. So the transverse momentum in the wake has to have come from the fluid itself. What happens is that the wake is travelling a bit slower, on average, and this momentum deficit is manifested in the transverse flow that persists downstream of the wing. But the momentum in the transverse plane of the wake still balances. There is as much going up as going down, and there is as much going right as going left.

So for real-world objects in a breeze, if there is a lift force

Momentum comes in two flavors - linear and angular momentum. Both are conserved quantities when no work is done on the system, as is the case here.

In the 3D case, where the wake flow does not return to the upstream condition, both types of momentum are none the less conserved.

The rotational momentum starts at zero in front and must remain at zero behind the wing. The wake consists of a pair of counterrotating vortexes that perfectly cancel each other's angular momentum regardless of any asymmetry of the wing. Creating these wake features requires a force. That force is mostly in the transverse plane, and we call the in-plane component lift, but that force can't ever be entirely in the transverse plane. It always has a drag component.

An airplane in level flight, cruising, needs lift to fight the gravity. It lacks buoyancy as opposed to blimps.

It sometimes needs even more power when cruising in not the optimal configuration of payload and misplaced CG of the load.

So even when a plane is not climbing it needs lift. That lift is provided by changing the airflow momentum.

Not the answer you're looking for? Browse other questions tagged moments aircraft-design or ask your own question.

4
How an airfoil works

6
What are the engineering challenges in WIG craft development?
2
Possible Hazards of Software Controlled Systems (Ex. Airline GPS/Elevator)?
5
Is a wing that runs the length of an aircraft viable?
2
Lift Requirements for Hybrid Airship
3
Compressing the air thrusted by an aircraft's propeller through a cone like tube
1
Does the turboprop engine torque get transferred to the engine mount and ultimately aircraft when engine is active?
0
Torque for servos of tiltrotors