Question: I do not know structural mechanics but I need an estimate of the max bending moment a rod can withstand. Is there any convenient "bending strength coefficient" which I can look up for the rod material, then plug into some relatively simple equation to find the max bending moment of a given rod? If not what would be the easiest way to get this estimation without fully diving into structural mechanics.

The formula for bending stress of

The resulting stress shall be checked against the allowable stress of the material. Once the limiting stress is known, you can plug it into the respective equation and obtain the maximum allowable bending for the rod.

The wing design is the art of designing for strength in the most efficient way to make the plane as light as possible, while not sacrificing the strength.

The part of the wing that carries the bending moment is called spar, basically acting like a cantilever beam, and it is never a simple rod or other simple uniform cross-section.

This is for example the figure of the spar of a Cessna 210, a small single-engine plane. The bigger the plane gets the more complex the spar and its attachments get.

As we see it is a complex assembly of formed sheets of aluminum/ titanium that grows wider and adds layers to get stronger as it nears the haul of the airplane.

It has many openings at places where cutting a hole could save weight but not impede strength.

This same philosophy runs through the rest of the structure of the plane like the fuselage, the rudder, and elevators. The entire structure is light and perforated but strong to take the eventual storm and high G loads.

After OP's comment, I add this link to a book on airframe structure. 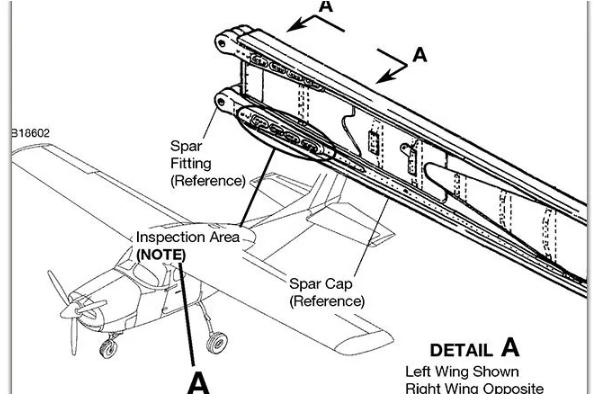 Not the answer you're looking for? Browse other questions tagged structural-engineering structural-analysis beam moments bending or ask your own question.

8
Unbraced Length for Lateral Torsional Buckling vs. Yield Strength
2
Wing as cantilever beam (beam-rod) model for aeroelasticity fluttering analysis
4
Torsion and Bending stress calculated from deflection
1
Shear and Bending Moment
0
Does the Superposition principle actually make sense in reality for a rod subjected to bending and axial force togehter?
2
Is bending moment along a beam independent of the cross sectional area of the beam?
1
Beam of uniform strength
0
Rigidity and bending moment