Heat transfer Calculation, for Cooling for an aluminium box

To go into more detail, I basically have a controller and its housing is basically an aluminium box that I need to add heat sinks to. But first I need to calculate how much heat is being dissipated by the controller towards the environment around it so that I can choose an appropriate heat sink that is rated for that specific heat. There isn't enough space for a big heat sink so the maximum I can cool is around 10W of heat dissipation, which is why I need to calculate the heat that is being given out by the controller in all directions. Since a box has 6 sides, how do I go about summing up all the heat flow rates for all sides? What other things should I be thinking about in terms of the cooling sink to be chosen? Should I also account for the heat across time?

1. Heat generated inside the controller $\dot{Q}_{in}$

The heat that you need to take out of the controller box is basically the generated heat from the electronics.

2. How is heat dissipated outside of the controller

Generally there are three types of heat transfer: conductive, convective and radiative. I will cover only the first two, which are applicable to your case.

The convective heat transfer is given by:

Convective heat transfer is when a solid surface and a fluid (liquid or gas) exchange heat. The total rate of exchanged heat is:

3. Total heat exchanged by a surface of the box

This is a combined conduction and convection case. So you have heat transfer through a wall in 3 zones:

Which results in the following temperature distribution: 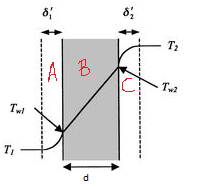 You can follow the derivation [here](convection inside the box) but essentially it boils down to the following formula which calculates the total thermal resistance":

When you calculate R, then you can use it the following way:

You would need to apply that 6 times for all surfaces of the box.

You noted that this box will :

Please note that for typical ICE cars the engine bay is quite hot. Anything in contact with the engine should be able to sustain temperatures of $100-120^oC$. That might seem quite a lot, however, you have to account for sitting in a mild traffic jam on a sunny day. So take care, because you might be wanting to insulate the box instead.

Of course, if the box is not in contact with the engine, or situated at a nice cool spot, there might not be a problem at all. But it's definetely something that can make your calculations fall apart.

Start with an assumption to find the maximum possible temperature inside the box. What is that assumption? All input power is converted to heat. What do we conclude? Power input is heat output: $P_{in} = \dot{q}_{out}$.

Now we can propose solutions.

Ignore radiation in the heat output. What do we obtain? $P_{in} = U A \Delta T$, where $U$ is the overall convection coefficient for the system, $A$ is the effective area for heat flow, and $\Delta T$ is the temperature difference driving the heat flow.

The temperature driving term can be set as the difference between the inside and outside of the box. The area and overall heat transfer coefficient are linked because the latter is relative to the former. Allow that we pick the outer area of the box $A_o$. The overall coefficient $U$ is a combination of internal convection in the box, conduction through the box, and external convection away from the box. It can be written to first order in the form of a set of series thermal resistors.

Nominal values for the convection coefficients $h_j$ and thermal conductivity $k$ in the above are found in references for heat transfer. The wall thickness is $w$.

When the walls are different thickness values, the factor $(w/k)$ can be replaced to first order by a parallel resistor approach. Suppose that each of the six walls has its own thickness $w_j$. The substitution is

With all of the above in place, you can calculate the maximum expected temperature inside the box.

Application to Problem at Hand

How do you modify this to suit your question? A first step is to properly represent the relative amount of the power input that is converted to heat. Call it $f_q$ to obtain $f_q\ P_{in}$ on the left side of the governing equation.

How do you modify this to add fins? The modification comes on the term $h_o$, the outer convection coefficient. Change this to a factor $h_F$ to account for the addition of fins.

You can take two approaches to determine $h_F$.

A pseudo first principles approach is to use a formulation that applies for multiple fins.

An empirical approach is to set the first-principles term to a multiplier factor per unit of attached fins to obtain $h_F = M_F\ h_o$.

The heat up (and cool down) periods are handled by second order differential equations. They are likely beyond the scope of your immediate needs. The maximum temperature difference will not change, only the time needed to reach that difference. To first order, the time constant scales as the Fourier number for the entire system.

Here are the calculations as done in Maple. 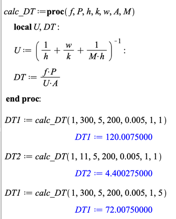 Not the answer you're looking for? Browse other questions tagged heat-transfer mechanical cooling heat-exchanger heatsink or ask your own question.

4
Can I control latent/sensible heat changes in a counter-flow, induced draft cooling tower using climate?
3
Heat exchanger design guidance
0
transient heat losses approximation, closed chamber
1
how would one calculate the % of heat not absorbed by a heat sink?
1
Cooling Down Fridge Encased in wooden box
2
Simulation of temperature in insulated box
3
Can aluminium foil be a thermal insulator?