What does Leonardo da Vinci mean in his statement on arches?

I was recently reading some of Leonardo da Vinci's notes on architecture. One passage on arches states:

An Experiment to show that a weight placed on an arch does not discharge itself entirely on its columns; on the contrary the greater the weight placed on the arches, the less the arch transmits the weight to the columns. The experiment is the following. Let a man be placed on a steel yard in the middle of the shaft of a well, then let him spread out his hands and feet between the walls of the well, and you will see him weigh much less on the steel yard; give him a weight on the shoulders, you will see by experiment, that the greater the weight you give him the greater effort he will make in spreading his arms and legs, and in pressing against the wall and the less weight will be thrown on the steel yard.

There are two parts to my question:

On 1, I interpret his scenario as in the below diagram. There is some arch which is supported at is ends by two columns $C_1$ and $C_2$. There are additionally two abutments $A_1$ and $A_2$ to the sides of the arch to counter the arch's horizontal thrust. A downward force $F$ is applied to the apex, which is directed through internal compression forces to the arch's ends, where we see $F_1$ being applied to $A_1$ and $C_1$ (and analogously for the other side). My understanding is that no matter how large $F$ is, the vertical components of $F_1$ and $F_2$ must both be $F/2$ in order to satisfy the static equilibrium constraints.

Then, how do I reconcile this analysis with Leonardo's claim "the greater the weight placed on the arches, the less the arch transmits the weight to the columns"? Is Leonardo assuming a different setup than I have? Or is one of us wrong? 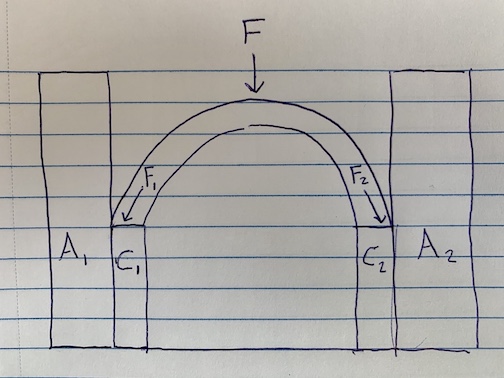 I think he may have been thinking two things,

If we follow him in his path of organizing the gradual transfer of vertical reactions to tangential friction forces from the wall taking most the vertical load, he must have been thinking of a gradual change in the mechanism of the arch from a regular arch to an arch with a plastic hinge formed on the apex.

That would make it possible for the vertical forces to be supported entirely by a triangular force mechanism with the external force on the top and a cracked or flexed apex and to friction forces on the two lateral bottom sides as the tangential components of the friction force.

Let's assume at the ultimate case when the apex is fully cracked or turned into a plastic hinge, a triangular truss substituting the arch with the two base angles at 45 degrees and the load P and the friction factor of 0.8 just to illustrate his idea.

The horizontal reaction at the walls

Not the answer you're looking for? Browse other questions tagged statics building-physics architecture or ask your own question.

2
What does the accuracy and precision values for a pipette mean?
0
What does this equation mean?