I was thinking that, if we choose a particular frequency in a Bode Plot where the dB gain curve does not cut through 0 dB, and where the phase curve does not cut through -180 degrees, then there would simply be TWO degrees of freedom, such that a particular combination of additional gain and additional phase would push the system to an unstable condition (or onset of instability).

where one could get closer to the minus one point by adding more and more inverse notch filters. From the Nyquist plot below it can be seen that $L(s)$ has an infinite gain margin and 106 degrees of phase margin: 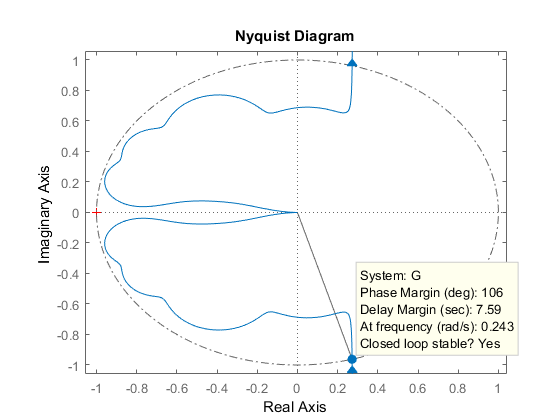 However, when applying both a gain and phase shift of only 1.05 and 8.11 degrees respectively the closed loop system (using unitary negative feedback) does already become unstable.

An additional robustness measure one could use is the modulus margin, which is defined as the shortest distance from the minus one point to the open loop transfer function in the Nyquist plot. A more in-depth explanation can be found in this paper in section 4. It can also be shown that the inverse of the modulus margin is also equal to the peak of the magnitude of the sensitivity transfer function and that a given non-zero modulus margin also gives a lower bounds for the gain and phase margin.

Not the answer you're looking for? Browse other questions tagged control-engineering or ask your own question.

4
Negative feedback Gain and Phase Margin
4
How do I compute/plot the open loop transfer function of a system given its state-space description?
3
Problem with performances of a control scheme
1
Physical interpretation of a Bode plot
2
Is there a concept of gain and phase margin for a strictly open-loop transfer function?
2
How do I interpret the following Bode, Nyquist and Nichols diagrams?