Im seeking an alternative to thermal grease/ pastes. I was researching graphite pads when I stumbled across the soft PGS line from Panasonic.

I need to choose a suitable thermal interface material to connect the CPU die to a heat sink. I do not wish to use thermal paste ( it is greasy). I was wondering which material would be most suitable.

PGS :Excellent thermal conductivity : 700 to 1950 W/(m·K) ( no data for z direction; I found some sources stating that the z direction was about 15W/m-K but I can not verify this).

Here's how I visualize heat flow with a high xy thermal conductivity interface. Without that interface, it would be more concentrated directly over the die, leaving the outer bottom edges of the heatsink relatively unused. 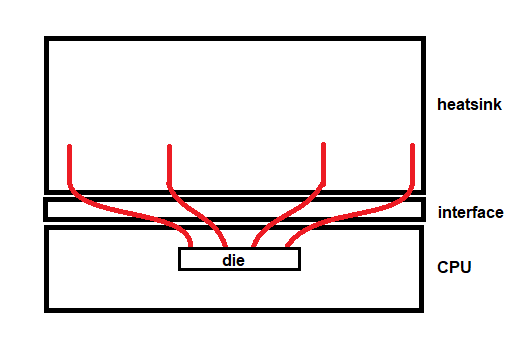 By the way, please only use capital K for kelvin and dot for multiplication in SI units since those are standard. The hyphen is a minus sign, not a multiplication sign! W/(m·K), not W/m-k.

Not the answer you're looking for? Browse other questions tagged mechanical-engineering materials heat-transfer or ask your own question.