I am new to vibration analysis/simulation etc. so I may be missing something very basic here so please forgive me if I'm explaining things poorly or not making sense.

To familiarize myself with vibration simulation I am trying to simulate the frequency response spectrum for a tuning fork. I am using Solidworks. I have

Here is an image of the main "tuning fork" mode showing the fixed base (green arrows) and excitation vector (purple arrow). 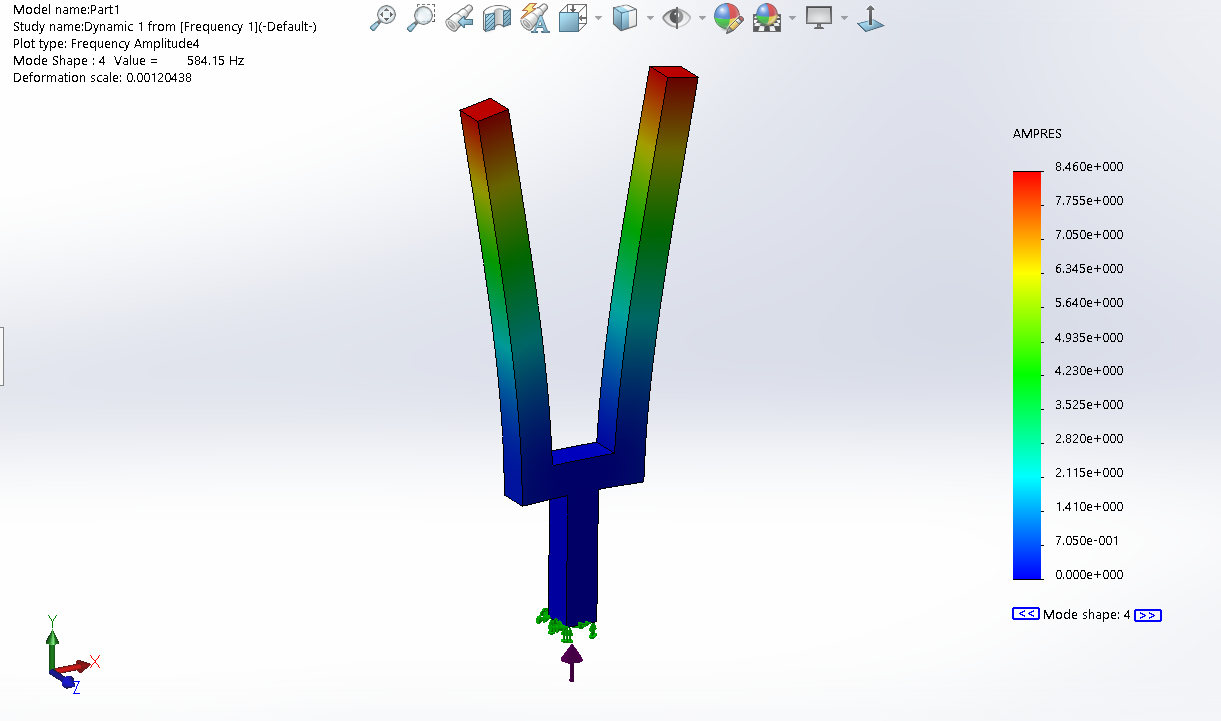 Here is a plot of the magnitude lateral displacement (x direction) of a node at the tip of one of tines of the tuning force versus excitation frequency.

Can someone please explain to me:

2) Whether it is correct or incorrect can you give me any intuition for why we should expect whatever is the correct behavior?

You said you applied a constant displacement to the base. In that situation, if the structure doesn't have any modes that can are excited at a particular frequency, the response is going to be approximately the same as a rigid body being moved with a fixed amplitude, which is what your plot shows.

Note that if you apply a fixed displacement, the excitation force will increase for higher frequencies (and except where there is a resonance in the displacement response) it will be approximately proportional to the frequency squared.

Another way to understand this is think abut a 2 DOF system being excited at a frequency much higher than its two resonant frequencies. In that situation the elastic forces are small compared with the inertia forces, so we can ignore the stiffness term in the equation of motion and approximate it as $$\begin{bmatrix} m_{11} & m_{12} \\ m_{21} & m_{22} \end{bmatrix} \begin{bmatrix} \ddot x_1 \\ \ddot x_2 \end{bmatrix} = \begin{bmatrix}F \\ 0 \end{bmatrix} $$ where F is the excitation force applied at point 1.

In other words, for a constant base amplitude, the tip amplitude of your tuning fork will also be approximately constant at high frequencies, except when there is a resonance that affects the motion of the system.

Not the answer you're looking for? Browse other questions tagged vibration simulation frequency-response or ask your own question.