How do I hook these components together to get my desired functionality?

I have a big button http://store.2xlnetworks.com/thebigbutton/ and a display counter Microframe Model 265 https://www.microframecorp.com/d0265-6-digit-rugged-computer-controlled-display . I want the push button to make the display counter go up one digit every time its pushed. Any idea how to go about this problem ?

You will need a computer between the two devices to count the number of spaces sent by the button, keep a running total, then assemble a string of digits to send to the display. Neither the button nor the display is smart enough to understand the other, or to count the number of times the button is pushed. Also, the electrical port on the display (RS-232) and the port on the button (USB) have different electrical signal levels that need to be translated. A board like the one shown here found on-line has both a USB port and an RS-232 connector, with a microcontroller connected between them for under $30. While I have not used this particular board, the basic features appear to be a good foundation to bridge the button to the display.

The technical hurdle is writing the program and loading it into the microcontroller to perform the task of counting up the button presses and sending a human readable character string out to the LED display. The ease or difficulty of the programming job is completely dependent your experience level. For someone who has used microcontrollers already the task should be trivial. It could be as few as a dozen lines of code. For someone who has never done a project with a microcontroller it will be a challenge, but totally doable. 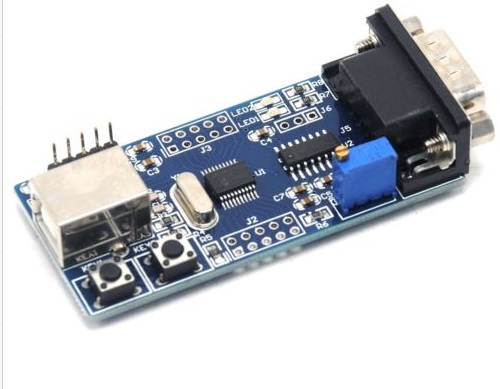 Not the answer you're looking for? Browse other questions tagged electrical-engineering power-electronics computer-engineering systems-engineering or ask your own question.

4
Tankless air compressor for electronics desoldering station
4
Focusing light from a laser shot into one point
0
How to determine motor needed for water pump
2
Memory and Transistors
0
How to get similart Geomagic two stl file deviation in free Cloudcompare software?
2
When an elevator has two buttons next to it, ^ and v, what do they actually mean?
1
Could a Jacob's Ladder produce enough hot air for a hot air balloon?
21
Why not put servers in a refrigerator?