Could a Jacob's Ladder produce enough hot air for a hot air balloon?

I am curious to know if a Jacob's Ladder would produce enough hot air to keep a hot air balloon afloat, or in other words, that it could be a substitute for a standard gas burner used for hot air balloons which carry humans. I am not actually planning to build one and use one for a real hot air balloon, it's just a scientific curiosity that I've had for a long time that I would now like to get an answer to from the Engineering community. 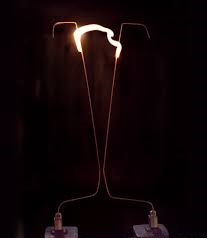 I am thinking that one could use several car batteries connected in series as the power source and a cable from these batteries would be connected to a high voltage transformer which would provide the high voltage for the Jacob's Ladder.

Not being an engineer, I have no idea how large the Jacob's Ladder would have to be in proportion to the hot air balloon, nor do I have any idea as far as how long the two rods would have be or what their thickness would have to be to handle the high voltage spark and heat from the plasma.

Could a Jacob's Ladder produce enough hot air for a hot air balloon?

Based on the comments and answer I've received about this idea, I am now thinking that instead of using car batteries, one could bring on board a small gas-powered electric generator and connect that to the high voltage transformer. A small, lightweight model like the one shown below may be an ideal model to use: 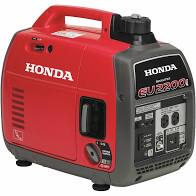 I am thinking that one could use several car batteries connected in series as the power source and a cable from these batteries would be connected to a high voltage transformer which would provide the high voltage for the Jacob's Ladder.

Since we're talking about a balloon, you need energy to heat the air, and that energy will be stored in something like a propane tank (or car batteries as you suggest) then converted to heat via a burner, a resistor, or Jacob's ladder.

What you need to know is how much energy per kilogram you can store. This is called specific energy for a battery. This is the amount of energy (in Joules or Watt.hours) that can be stored in 1 kilogram of battery.

You should consider the complete system's specific energy. For propane you have to add the weight of tanks and burner, which will weight about as much as the propane. So the total weight doubles, which means the specific energy halves, so in the end, rounding down you get say about 6 kWh/kg specific energy. It's pretty good.

This is still way better than what batteries can do, which is why the method you would use to turn electric energy into heat doesn't actually matter for the feasibility of the project. It's the energy storage that matters. This is also why we don't have electric rockets. Specific energy of rocket fuel is a very important parameter since it has to lift and accelerate its own weight.

For Plutonium-239 it would be the other way around: the energy storage would be tiny, but the "burner" would be a problem, if you want to climb in the balloon without getting radiation sunburn then you will need a huge amount of lead and concrete shielding which means it will only be a popular solution for something that doesn't fly, like an aircraft carrier (unless you don't care).

Also there is a problem with the power of a hot air balloon burner, which is at least 2 MW (Megawatts). It isn't that expensive to make a bigger burner, but 2MW of electricity is really huge.

As for the other part of the question "could you use an electric arc to heat stuff" then yes, it is done in arc furnaces. Problem is, the temperature of the arc is high enough to melt pretty much everything, which is why it's a great choice for a furnace to melt steel... but in open air at high power your electrodes would quickly melt and react with ambient oxygen and burn. Carbon is a popular material for arc lamp electrodes as it withstands high temperatures, but it burns in air, so it can't be used to heat air.

6
Is it possible to fire a ball of water that holds its shape?
5
Why is capacitor 2 not grounded on this board?
0
timing pulleys setup for children's pedal car
1
Will strong electric field damage electronic components?
1
Can a switched mode power supply for a neon sign be used for making lichtenberg figures?
0
Braking movement of a chain through a pulley or sheave