Having to build an apparatus, trying to show the concept

I have to build an electro-mechanical device that has a few sliding and rotating parts controlled by servos and actuators from Phidgets.

I made the prototype with wood; it was crude, imprecise, and looked like it was built from scrap from a junkyard, but it proved the concept.

Now, we are going to need to make the real thing. I spoke with a local company that does CNC work and I tried to explain to them the concept. But I suck at drawing, and the original prototype covers just a part of what we need.

I have several options that I am contemplating:

What would be the best way to describe a device to people foreign with the concept? They need to understand how it operates, the constraints for the moving parts, etc and eventually come up with the final schematics. So I need to get the point across.

I have never done this before, and this is domain that is foreign to me.

I think that it depends upon what your purposes are.

If you're looking to pitch the concept to investors, then there are a couple of routes to consider.

The most obvious route, as you mentioned, would be to build a second, more refined prototype. It may be worth giving this another consideration despite the investment of your time. Nothing sells a concept to an investor quite as well as an actual, functioning prototype.

For perspective, Dyson claims that he went through over 5,000 prototypes in designing his first bagless vacuum.

Another route to consider is that sketchup appears to support creating animations. If you eventually want to ship this concept off to a machine shop, then you'll need to invest the time to create digitized plans. This is likely the fastest path to having a refined presentation of the concept.

One other concept to consider is to create a video recording of the existing prototype. That will both demonstrate the moving portions of the concept as well as digitizing the concept so it is more easily shared.

Rebuilding the prototype in a non-functional way (leaving out motors) with a material that you never intend to use for production doesn't seem like a great approach. That seems like a step backwards from where you're currently at.

Another option to consider is to contract with a mechanical design shop. Not all CNC shops have mechanical design capabilities, so you may need to shift who you are talking with at this point. A design shop should have an engineer or draftsman that can work with you on the concept and then build a specification. It's worth noting that this can appear to be an expensive option, but you are paying for their expertise in creating schematics.

The best route in this situation is a simple feedback loop: 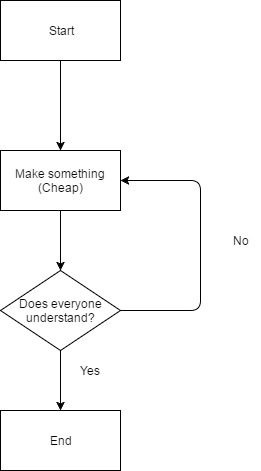 Looking at it like "I need a definitive solution for it to come out right the first time" is how scientists approach things. That's what makes engineers different. Here, we modify and redo over and over until it comes out correct, not just settle for the "one answer".

3
How to divert solids from a downward vertical pipe
7
Switching batteries from series to parallel - technical solution
2
Lightweight substitutes for machined aluminum parts
1
How do you mount a polystyrene foam wheel to a motor?
3
Autonomous RC car trying to stop at a point
2
Automatic door, linear actuator or stepper motor
0
air-dropping actuator for a small drone
0
Braking movement of a chain through a pulley or sheave