I have to build a device to apply a pure normal force over a force plate. The requirement is that it doesn't apply any shearing (by means of friction) on the surface.

The problem is: for any given device structure, there will always appear some deformation, specially under load, and so I don't want to depend on geometric alignment, I would like to have my indenter to have an appropriate joint with the proper types of degrees of freedom.

I though about a ball bearing roller, but that would only decouple the force along one direction, since it could still transmit force by friction along the other direction. 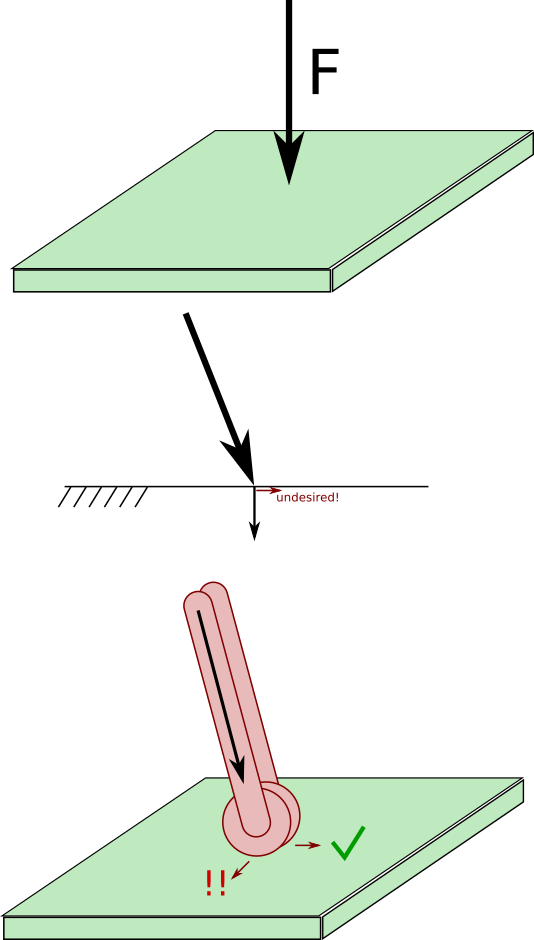 So my question is:

What is the recommended way to eliminate coplanar reaction forces, so that only normal force is transmitted and coplanar forces are neutralized?

I think lubricant-based solutions don't fit well, since they are always quantitative in nature. I think a qualitative solution involving mechanical decoupling by a proper joint is better, similar to the ball-bearing one, but with an additional degree of freedom.

If you apply a force which can be decomposed to a non-zero horizontal component, that component has to be transferred onwards.

So, if you only want the vertical component to be transferred to your plate, you'll need to create a secondary structure to absorb the possible horizontal component.

One possible inspiration are sliding plate bearings. These allow the free translation of an object along the horizontal plane, meaning no horizontal forces are transferred to the underlying structure (other than inevitable friction, which is low due to the adopted materials). Obviously, you'll want to limit these translations at some point, so you'll need to design a container which restrains the plate's movements. When the plate touches the container, a horizontal force will appear between them, so the container will have to rest on something other than the structure you're trying to protect.

If you'll forgive my horrible sketch, this is what I mean:

The low-friction pad allows the upper plate to move freely in both directions. If an inclined force is applied to the upper plate, it will move until it touches the bounding structure, at which point the horizontal component of the force will be absorbed by the wall (or whatever supports the bounding structure, which can't be the same as whatever it is you're trying to protect), while the vertical component is transferred directly to the underlying structure.

6
How to design a narrow bearing that supports shear direction load
2
How to describe the rotation of opposite ends of a body due to an applied moment
0
Why is friction force is not considered as centripetal force?
6
What is this kind of bearing called
0
Aren't there infinitely many orientations some given gyroscope angles could represent? (Generally understanding gyroscopes)
0
wingrotor rpm regulation; wind turbine regulation mechanism how it works?