How would you mechanically model an Earth-Moon like orbit?

I'm hoping to make a small mechanical demo (~10cm tall) that models an orbit that is similar to the Earth-Moon orbit - that is, only one side of the Moon faces Earth. I'm trying to keep it simple, so here's my idea so far: 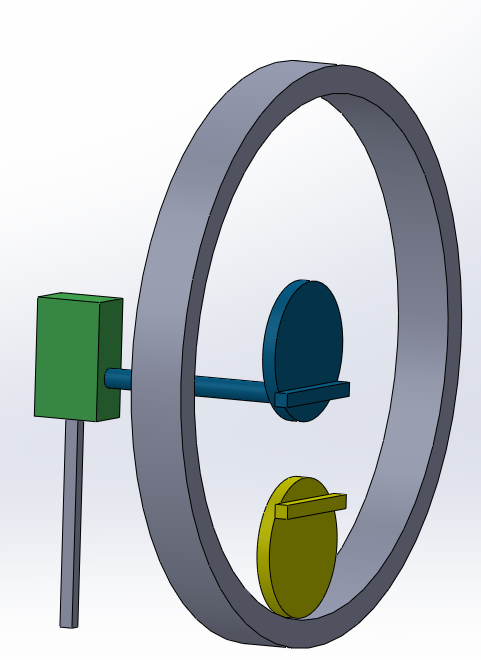 where the blue and yellow represent Earth and Moon, respectively. These are meant to represent a different planet and its moon though.

The orbit of the Planet (blue) and its Moon (yellow) has the following differences:

My question is: how should the two discs be connected in order to to have the above properties? I've thought about using springs, but I think it'd be quite flimsy though.

I know about orreries, but typically they don't self-adjust orbits though. Also, I was hoping for a simpler mechanism given that there doesn't need to be empty space between the two discs. I'm only hoping to model the motion on just one plane.

I started these as comments but they're way too long for comments. Basically, please clarify what you want.

Please clarify your question by:

Also bear in mind that, to show rotation in a plane, the axis of rotation has to be orthogonal to the plane. As soon as you change the angle of the axis of rotation you cannot have a planar display. You could have a projection, but I'm not sure that you could depict a 2D projection of an off-axis sphere rotating with a "simple" setup.

2
How to describe the rotation of opposite ends of a body due to an applied moment
4
How to secure a rotating disc so that it has no wobble
3
Canonical approach to experimenting with a gearbox design
2
By what factor should I scale some tapered legs to make my harpsichord stable?
4
How do I mechanically convert 200 steps into 360 discreet degrees?
2
Functionally Matching Gears (teeth count) in Planetary Gearbox
4
Speed and Feed values for log slitting of paper
0
Name of this type of platform lift