How to calculate the speed and force of the piston in a vacuum syringe?

Suppose i have 4 empty syringes. And by empty i mean they were having the air sucked out of them, and they "contain vacuum". Assume the head of the syringe is blocked so vacuum can be formed.

I want to understand how to choose between this 4 different syringes.

When i release the piston - the atmospheric pressure will make the piston move pretty fast - and blow up the head of the syringe.

This is not a real world example. Just something for me to learn. I don't know what the piston friction with the walls is - but is the same for all 4 syringes so does not matter when comparing them.

Also i don't know the mass of the piston either.. i mean we can use a gut number like 0.25 kg. And the bigger piston is 1kg.

Now how to calculate all this? 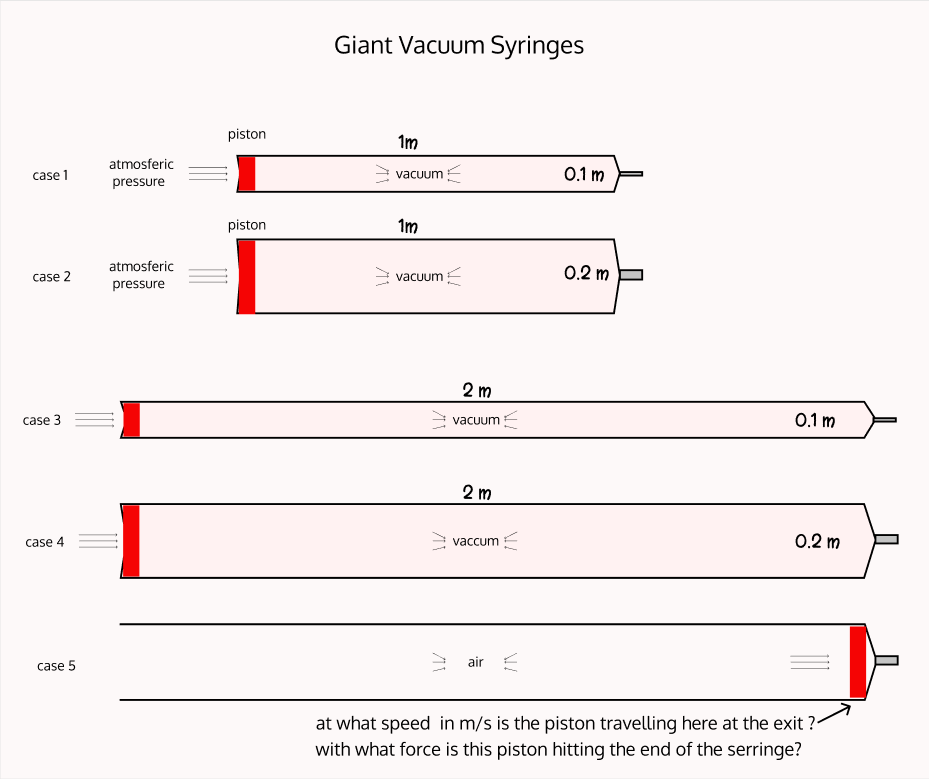 Also i'm interested in forming an intuition of what to expect given changes to the design of this syringes rather then exact numbers. What happens if i increase the diameter 3 times.. is it better or worse .. that kind of thing.

Does it matter how long the syringe is? Can it happen that if i make it too long then the piston is actually slowed down? Is this piston constantly accelerating while is in the syringe and there is still vacuum in front of it .. or not actually? Can air to air turbulence slow things down? Where is the highest acceleration at? Maybe in the middle of the syringe ?

I say this because if we go down to 1 mm tube, then capillarity is so high that you need to push on it like crazy to make things move. I'm thinking about what force is needed to squeeze that fluid in a medical equipment (needle + tube). So when it comes to tubes like this, maybe having a higher diameter is better?! Maybe this applies to air also?

I can put the numbers in a calculator and get the result, but i'm interested more on how to think about this, not just the formula. How do you break it down in your mind - and not be wrong?

But i do want to lean how calculate the exact numbers as well. Thanks :)

If we ignore the friction and assume total vacuum ( both unrealistic) the force on the piston with the larger diameter increases. But it is reasonable to assume the mass of the piston increases by the same ratio.

$F=ma$ and say $KF=Kma$ with K being the ratio of area of the cylinder, meaning acceleration doesn't change. of course if you have the mass of the piston differently just plug it in the above.

And obviously the longer syringe will allow the work done on the piston increase, hence its final speed increase. $W=F*x $

The final speed will be

And the kinetic energy at the time of impact

I think you're dismissing friction far too easily.

Since you asked for it here it is:

The forces on the piston are pressure (from the atmosphere on the back of the piston) and friction. So we have:

Since the area, pressure, and mass are constant, the accerations must be as well. Thus we can use the equations of constant acceleration:

Combining these two can give you final velocity in terms of distance and acceleration:

Now we can do some more interesting things if we make some assumptions about how the piston mass scales with different dimension syringes. For example, we could assume that the density of the syringe was constant, and thus the mass was proportional to the length, and proportional to area:

if we plug that in we get:

The areas cancel. So the cross section of the picton wouldn't matter at all if our assumptions were correct.

Now, from your images it actually looks like your piston is the same length regardless of the length of your syringe. This would result in the mass only being proportional to area:

So in this case: the longer the faster.

However, speed might not be the factor you really care about. If you care about how hard the piston is going to hit, you might care more about impulse or kinetic energy. Ballistics usually measure impact energy when concerned with how strong an impact will be.

The energy that you impart into the piston is always equal to the volume of your vacuum multiplied by atmospheric pressure. This is true regardless of the mass of your piston.

It's likely that friction plays a significant role in the final velocity.

3
Spring - Piston with different extension and compression rate
0
Find optimal configuration for Stirling Engine
1
How to couple two pistons to a rotating shaft so that the piston heads move like this?
0
Thermodynamic, ideal gas problem
1
Calculating piston force for pneumatic vs hydraulic
2
how are these radial piston rotors machined
0
What is the force needed to exert on the piston for a certain extrusion rate of a syringe tube?
0
Clarification of a piston and crank dynamics question
0
Purpose of the piston ring in an engine