Why hydroelectricity needs to flood so much land surface if only the height difference matters (hydrostatic pressure is not affected)?

Taking into account the fact that what matters in hydroelectric power generation is the potential energy of water, one would be led to the conclusion that we do not need the rest of the reservoir on the picture below, i.e. everything what is to the left of the picture.

Why one has to flood big areas of land if even a reservoir with small surface gives us what we need, i.e. equal pressure at the turbine (given by the height of the water column above it, the hydrostatic pressure is not affected by the area of the dam) and the same flow rate of water, given by river's flow rate?

If one wouldn't be restricted by the need to regulate the flow rate to the turbine, one could in principle build a power plant at a waterfall's edge, e.g. by digging a hole in the rock from the of the waterfall to its foot and putting a turbine there. Much smaller cost, no land flooded. Correct, or are there any other restrictions? 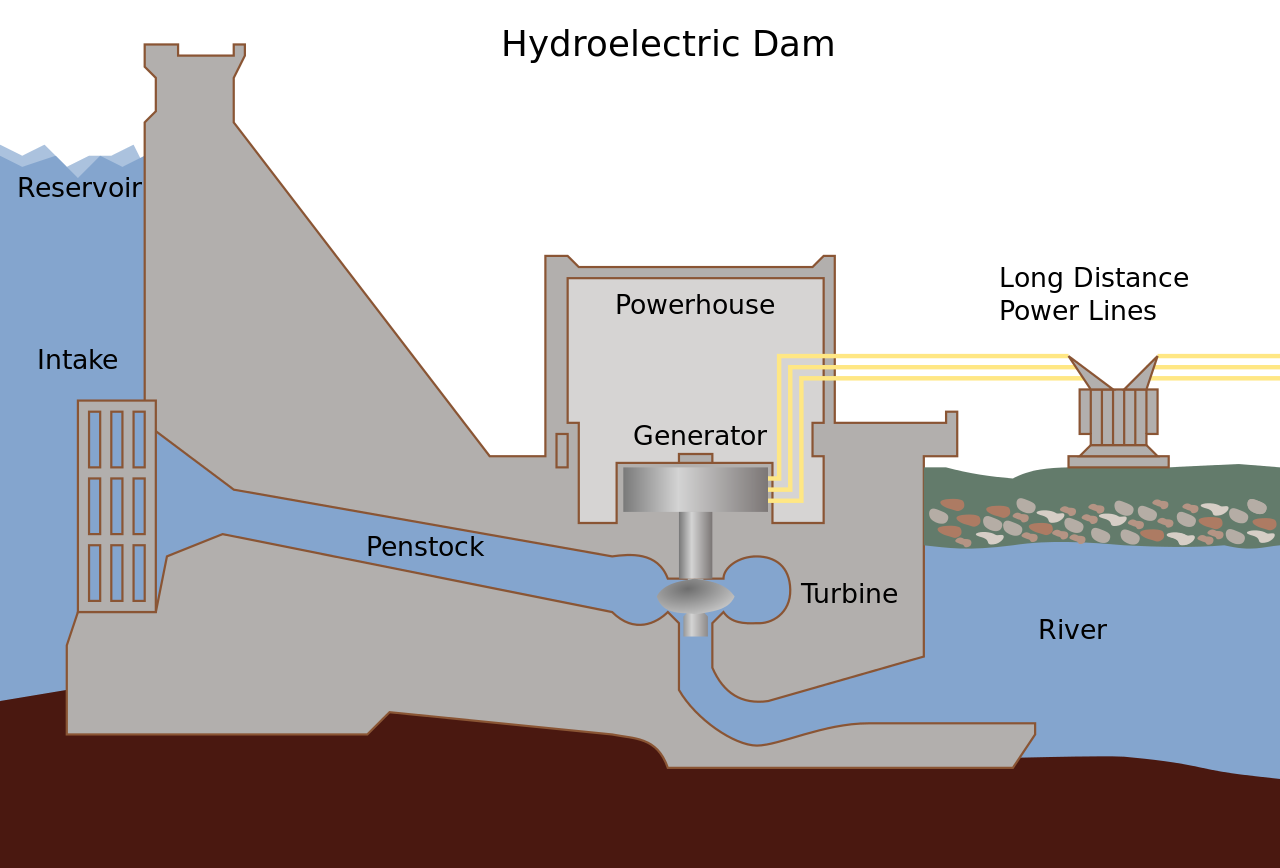 If the reservoir were deep and small, it would be possible to get the required power for a short period of time, but, it would not take long for the water level to drop, and the system would no longer be able to keep going at the same rate.

The power generated is a function of the drop in height, and the flow rate out of the upper reservoir.

With a very large reservoir, you are able to sustain the flow rate out of the upper reservoir for a much longer period of time before the level drops too low to be useful.

Hydro plants are often used to smooth supply/demand fluctuations due to their ability to rapidly adjust their output by opening/closing valves - it doesn't make sense to run them at a constant rate based on the flow rate of the river, which will change seasonally in any case. There are plenty of other technologies better suited to a constant load.

Furthermore, there isn't an easy way to get the drop in height without flooding the area behind the dam - you'd have to build walls around the river on all sides, and this would be such a monumental engineering challenge that the benefit of reduced land use would be completely eclipsed by the cost and risk. (see @joojaa's answer, too)

Q) An electric wheelchair runs on 24V. You could get the same voltage from putting together 8x AA batteries, so why do they need to have two very large Lead Acid Batteries?

A) The AA batteries could make the motor turn, but they wouldn't get you all the way to the shops and back before running flat.

One of the things you're missing is that for constant power you need a constant head. Power will be proportional to mgh where m is the mass/unit time through the turbine, g is the acceleration due to gravity and h is the head. Since the power will decrease linearly with head height it is important to keep the head constant.

This could be done by flooding a large elevated plain and putting the turbine at the bottom of a valley leading away from the plain. I suspect that there aren't many suitable geographical locations.

I would like to add geography into the discussion. While building the dam is one thing, and having enough water is another. The reality is that most basin areas that are exactly of right size are for most part already dammed. So the area is also partly a function of the size and shape of the area on the other side of the dam.

It would be economically very expensive to build the entire area surronded by a dam. The aim is to use the natural features as well as possible. This encourages the slight exageration of the area inorder to maximize power output. The area is softof "free" anyway. Having more area afford you to have more turbines in parallel before you start to affect the water level of your dam.

The simple explanation is that the dam storage is more of a capacitor than a water mountain. Try to picture a capacitor in a rectification circuit, it's filled as a dam so when the voltage drops a bit in the case of full rectification or totally in the case of half, the capacitor sustains the supply of current in the circuit until the periodic electricity flow comes back up and recharges the depleted capacitor. So the large space occupied is more for storage and steady/uniform water supply over time than gaining pressure. And if you consider how much it'll cost to build a concrete channel along the river bank to raise the water linear upward, it's just not practical. Your idea might thrive in an apocalyptic situation where there's heavy shortage of flowing water, else, it's not really a great idea.

4
Tankless air compressor for electronics desoldering station
8
Why do hydroelectric plants use turbines instead of an efficient 'water wheel' configuration?
7
How to apply power flow analysis?
0
How to determine motor needed for water pump
2
Investigating the potential of generating energy from moving water in pipes on a water production site