How does an expansion tank work?

I know that a hydronic system forms a closed loop. When the boiler is turned on, the water temperature will increase and expand. Since this system forms a closed loop, there is no volume for the hot water to expand. Therefore, the pressure inside the system will increase and explosion might occur if the pressure increases significantly. To maintain a constant pressure, an expansion vessel is installed to contain the increase in the water volume as it expands as it heats up.

It is better to think of it in terms of volume than pressure. The key point is that air is compressible while water is not.

So its not so much about keeping the pressure in the system constant as giving the water somewhere to go as it expands which doesn't involve stretching the solid parts of the system.

The fundamentals are shown below.

The water pressure in the tank will be a sum of the pressure from the diaphragm and the gas pressure.

A device used to heat domestic potable water to about 120 $\circ$F (50 $\circ$C) is usually called a hot water heater. To heat water above that temperature the device used is called a boiler.

Steam boilers provide steam to a steam system that is used for heating only.

High pressure and high temperature hot water boilers, the ones exceeding the above, are found in Manufacturing plants, hospitals etc. These types of boilers will need heavy duty non pressurized expansion tanks.

For boilers, you wouldn't use an expansion tank. You would use a steam drum. An expansion tank is for pumps that pulse (especially piston pumps). The difference is in the design: 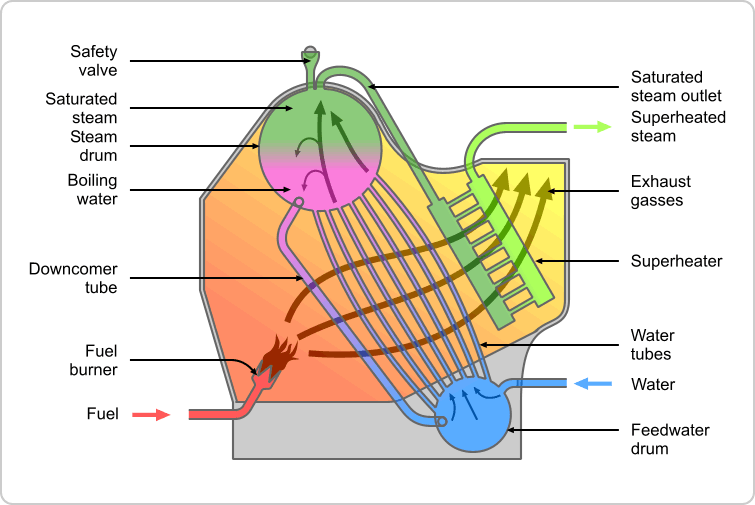 The liquid-steam interface is where expansion typically occurs. The water is given enough thermal energy to expand up the water tubes. However, the larger diameter down comer has different thermal heat transfer properties, and as such the water sinks inside of this tube.

Any expansion then is driven towards the condenser due to this expansion. The density differential between the heated steam and the cooled liquid is enough to overcome the pressure losses in the system and drive the steam forward.

An expansion tank works how you describe, but they are mainly for pumps, such as diaphragm or piston pumps.

The idea is to allow the pressure of the pump to stabilize against the compressed air, rather than deal with the jerky motion of the single piston compressing the liquid. They work sort of like a pass filter in an electrical cicuit - an extra large capacitor is not needed, because the extra surge pressure (or extra electrons) are depleted when the pump cavity is refilling (or when the electrical circuit is in the negative part of the wave).

Not the answer you're looking for? Browse other questions tagged mechanical-engineering fluid-mechanics hvac or ask your own question.

1
Pressure drop across a damper vs rotor stator pressure increase
0
How to dump moist air without heat backflow in evaporative cooling system?
0
How to ensure uniaxal and uniform force application on uneven samples using pressurized fluids
2
How to periodically shut down a recirculating hot water solar thermal system