air-dropping actuator for a small drone

I'm planning to build an air-dropper for a small drone - a device to release small payloads hanging under the drone.

This is a commercial example of such a system, used with a much bigger drone - for heavier payloads, pretty heavy itself, and using the drone's built-in systems for control:

I'm planning to build something similar, but much smaller. Payloads of up to 100-150 gram (but often smaller too), a completely independent control system. I already have working remote control electronics capable of outputting 3.3V at 40mA (driving a tiny coreless motor like this; I also have such motors), under 10 gram together with the battery.

I still have no idea what sort of actuator I could use to release the payload. I'd prefer it to remain unpowered when 'latched', needing only power to open (drop the payload). It should be as lightweight as possible, because any of its weight takes away from payload capacity of the drone. And not being very expensive would be a big plus.

For the ideas I had so far:

I'm not specifying the housing, 'hook', line, attachment methods etc here - these are to be made such as required for it to work.

(also worth considering: a fully mechanical connector with no electronics; disengaging on a maneuver not encountered in normal flight, e.g. a rapid drop. I can't generate negative-G, but I can make the drone -almost- drop out of the sky. If this could disengage the hook, that would also be a workable solution. This is not as preferable as it requires considerable vertical space and is rather risky.)

I would recommend using servo (or other actuator) to pull a pin that is holding the load in shear. That way, as long as the friction of your system is low, the actuator will only need a fraction of the force (like a mousetrap). You would attach the pin to the servo arm such that it is as close to the rotation point as possible to give you the most torque. Also, make sure the attachment point can rotate for proper actuation and release. On the other end you will want to use something thin (or with a shallow hole) to support the pin. This way the stroke does not have to be very long.

Here is a cartoon image of the proposed idea. Things are a bit exaggerated; you will want to reduce the distance between your servo and the pin support so that the pin as is short as possible. A shorter pin means it can be a thinner rod without bending or buckling under the load. 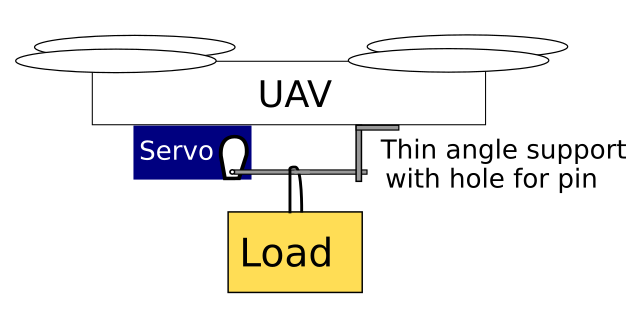 Also note that the servo will need pwm control. You can get controllers for this, or if you want discrete input you can cut open the servo and just power the dc motor directly. Make sure you have a delay or a limit switch (possibly in its circuitry already) so you don't fry the motor.

I've designed and built using a 3D printer a release mechanism to drop one kilogram payloads from a DJI Phantom 3 copter. It used the same principle as the 3-ring release mechanism patented by Bill Booth for cutting away parachute canopies in the event of an emergency.

In the system I built, I used cotter keys on pivots. The first pivot point allowed the load to be applied close to the pivot. The end of the cotter key was then captured by another cotter key with the end being close to the pivot, but with the second cotter key 90° to the first. This was repeated again. With the dimensions I used, there was a one thousand to one reduction of force, based on the mathematics of leverage. It might have been a bit greater than that, but rounding down reduces the exaggeration of pride.

The end result was that the final release required so little force to open that the camera integrated into the Phantom was able to push the release lever. This caused the cascade of the three links to open in sequence, dropping the payload.

This video link shows the release in action. The wheel on a pin is a locking feature, as the force is so small for release that it slides open without much load. The teardrop on the end of the release bears against the camera mechanism and is press-fit on the pin, allowing for rotational adjustment once the bracket is in place.

Between corners 3 and 4, there is a small folded piece of soft drink bottle providing "ejection force" to the last pin, effectively applying additional force to keep friction between the last pin and the release pin.

I've found that a tiny bit of lube causes the release to open with vibration, while a tiny bit of debris or debris will prevent opening. This is directly related to the extremely small force available from the camera acutator.

If one created a 3-link or greater release in the manner described, one could use extremely light actuator mechanisms, electro-magnetic or mechanical. My objective was to have zero interconnection with the electronics of the copter. If you can wire into the lights as shown in the video, you have more power for a solenoid release or similar.

Latching relays in both the NO and NC state are common enough. Granted, those will be a bit larger than what you need, but the principle is easy enough: you manually engage the latch, and an electrical pulse to the relay pulls the latch into the open state, releasing your cargo.

Not the answer you're looking for? Browse other questions tagged mechanical-engineering actuator or ask your own question.

7
Traction mechanisms for a robot in confined spaces
4
Tankless air compressor for electronics desoldering station
0
Fast and quitet linear actuator for lifting less than a kilo
4
Selectively rotating (engaging/disengaging) one of 80 couplings on a small shaft?
2
building a clock with a rotating face
1
Type of electronic lock for a garage door?
0
Solar panel actuator control
0
How can I measure the coefficients of friction of pulleys?