Why don't towers use buoyancy to reduce weight?

Instead of using steel and concrete to build towers why not use mostly light weight, high tensile materials and then suspend the four corners from four giant helium balloons?

The four main cables would be anchored to the ground at the bottom, and held apart at the top by the force of the balloons pushing off each other, as they are pulled inward by the tension required to suspend each floor. So the four corner cables would essentially form a parabola, like the top cables of a suspension bridge, except vertically.

Could a skyscraper be constructed in this way?

How big would the balloons need to be to suspend the building?

The engineering design of towers is not limited in a practical sense by their weight, meaning that the scheme you propose solves no problems in that field. Truly gigantic balloons would be necessary and the cost of a "floating tower" suspended from them would be huge- probably dominated by the price of the helium necessary to fill them and keep them full in the face of leakage.

I would also not want to be in one of them when a windstorm hits because large lighter-than-air structures respond badly to wind shear and turbulence.

I think there are multiple aspects to this question. If I'm not mistaken, your concept would basically mean, that every floor is anchored to those 4 cables in the corners, thus basically "floating" in the air? As a consequence, the upward force generated by those balloons would be (greater) equal to the weight of the floors. Something like this: 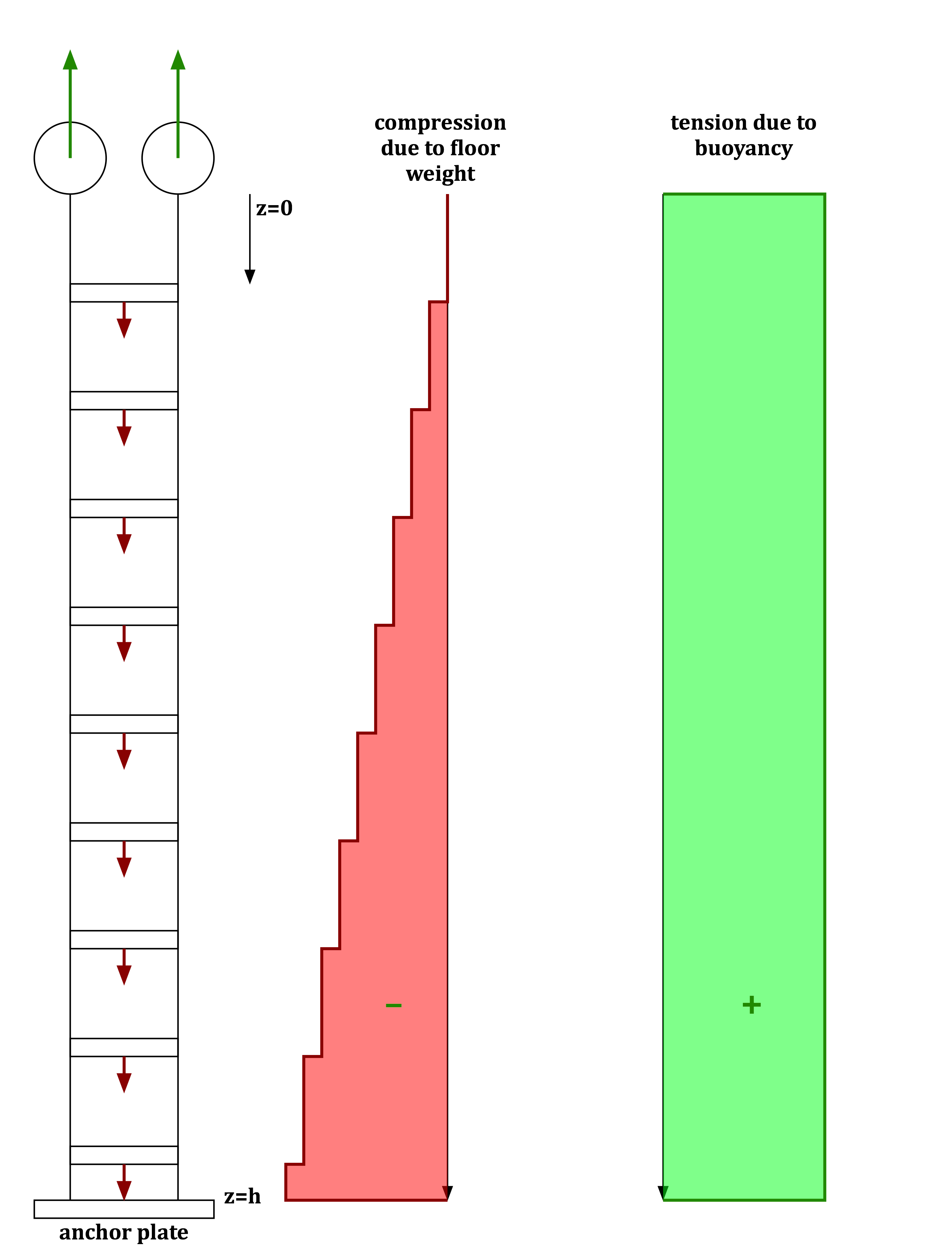 In this graphic I have neglected the tension due to the dead load of the cables.

Probably the biggest problem aside from statics would be the stability and safety of the structure; leaks, failure of a balloon, wind, etc.

Though being the most abundant element in the universe, helium is relatively rare on the earth. Currently, most helium is extracted from natural-gas, but those fossil fuel resources are limited. I'm not sure whether we would want to risk losing such a precious resource.

2
Why don't we often use polymerics for large scale structures?
10
Why don't we just build a giant wind turbine?
11
Why do we use multiple reinforcing bars instead of one bar with a big diameter in reinforced concrete?
9
Why don't we use principal maximum stresses when designing a structural element?
3
Why do North American Roadways Use Yellow Instead of White to Separate Opposing Traffic?
5
Why use two tower cranes on one construction site?
0
Why we don't use fillets while making buildings?
2
Why don't we use other substitute of cement while building a roof for thermal proofing?