This is a table with two wings that fold down, and two legs per side that swing out for support. I'm pretty confident about this design being stable: 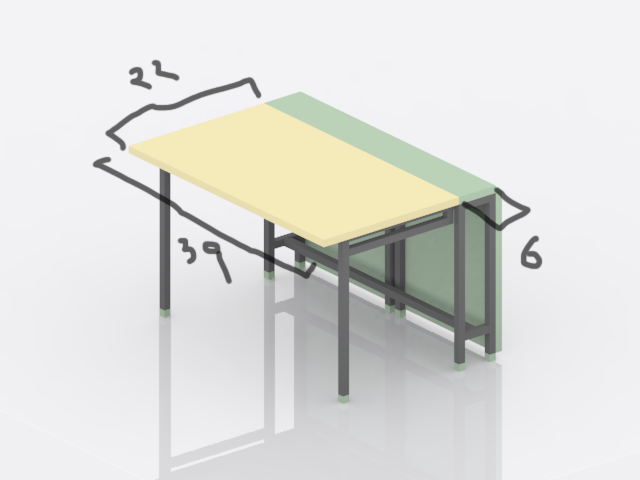 Here is an alternate design. I would like to find a way to reduce the overall weight and only include one swing-out leg (other wing removed for illustrative purposes): 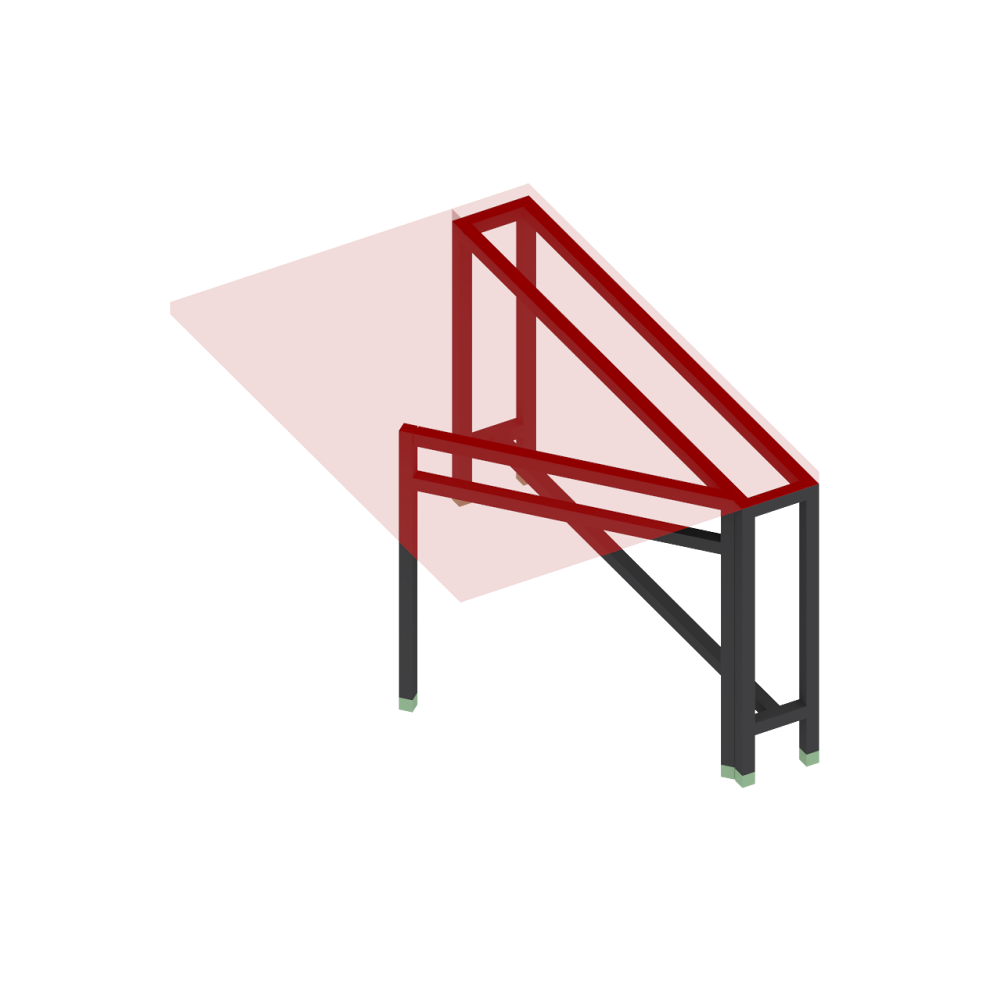 The swing-out leg is shown here fully extended to its resting position. It would have some kind of ball/socket mechanism to lock in place.

Alternatively, the single leg in the alternate design could swing out from the center to form a T-shaped frame underneath, which is probably more expected: 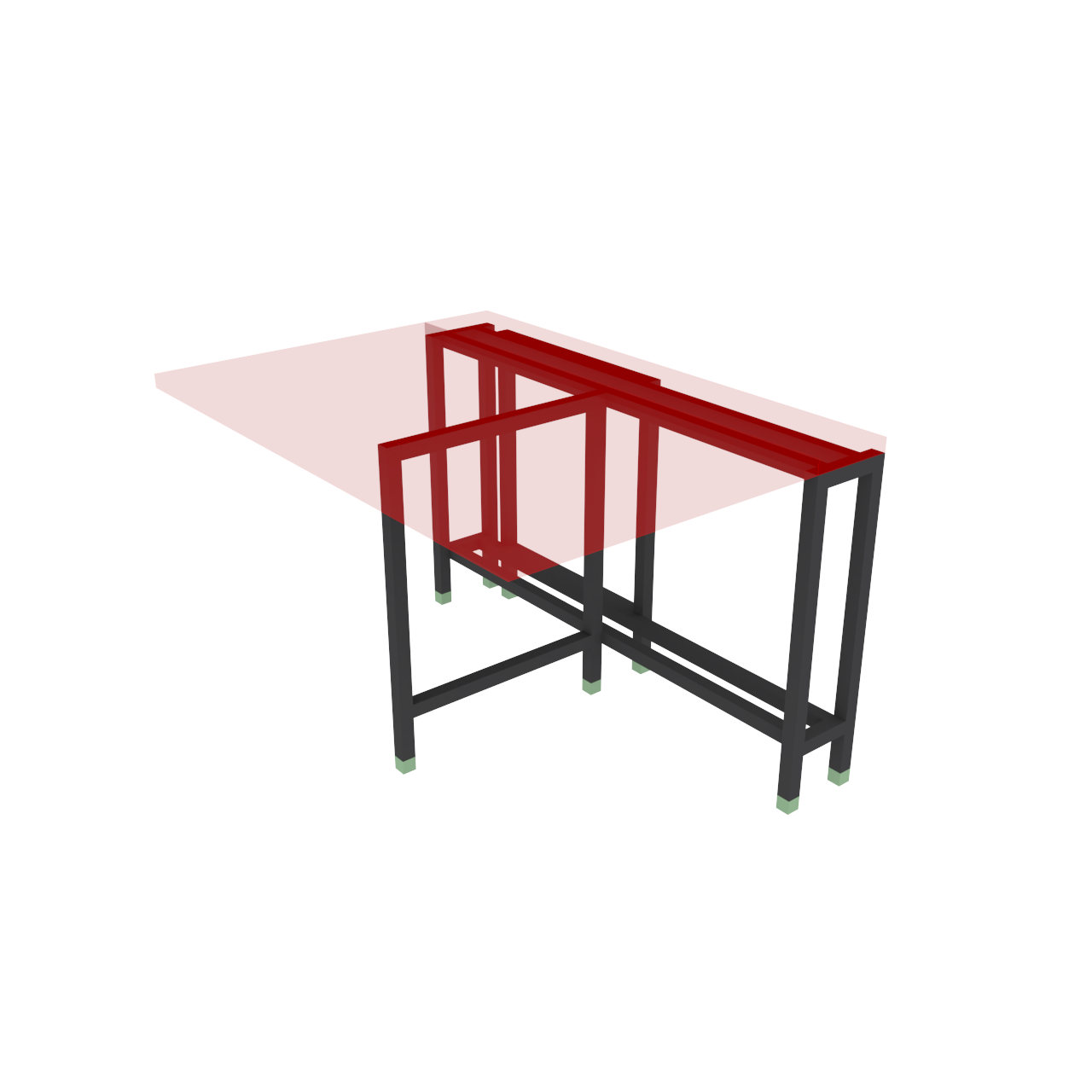 My question is: how can I calculate this table's stability? I worry that in the second design, there would be stability issues in the corners. I'm an amateur builder and not sure how to go about this.

Oak would be the surface material, with the legs being 1" square steel.

There is a similar table from Crate and Barrel that I can't link to due to being a new user ([A], [B]):

This question is in regards to stability, so that's what I'm going to focus on (as opposed to strength, which would require far more information regarding materials, dimensions and connections).

Your table has three configurations:

Stability can be measured in three ways: how much horizontal or vertical (upwards or downwards) force is required to tip a structure over. 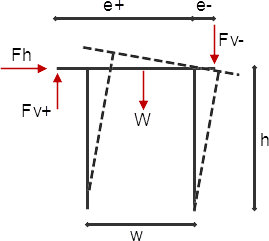 Without a doubt the most unstable of these configurations is with both wings down. In this case, the table is supported basically only by the four central feet. Obviously, very little horizontal force is required to tip it over on its long side. In fact, the force required is equal to $$F_h = \dfrac{Ww}{2h}$$ where $W$ is the total weight of the table, $w$ is the width of the supports (in this case, 6"), and $h$ is the height of the table. Therefore, we can see that the stability is proportional to the table's weight and to how wide its supporting base is, and is inversely proportional to the table's height.

For downwards vertical loads, the equation is $$F_{v-} = \dfrac{Ww}{2e^-}$$ where $e^-$ is the distance between the farthest point outside of the supports and the nearest support. Given that the feet of the table are basically right on the outer perimeter of the table, the value of $e$ is close to zero, therefore $F_{v-}$ is necessarily quite high.

For upwards vertical loads, the equation is almost the same $$F_{v+} = \dfrac{Ww}{2e^+}$$ but $e^+$ is the distance between the farthest point outside of the supports and the opposing support. $F_{v+}$ is always lower than $F_{v-}$, but arguably also less likely.

These equations can be applied for the other configurations as well. The new legs dramatically increase the value of $w$ in the direction perpendicular to the 39" side, increasing $F_h$.

For downwards vertical loads, the design of those rotating legs matters. If they open as in the first drawing, then that's fine: once again the legs cover basically the entire perimeter of the table, leaving little space to flip the table and therefore requiring a massive load to do so. If it's a single leg swinging to the middle of the wing, then that's more problematic. In one direction (perpendicular to the 39" side), you'll have $e^- = 11''$ (half of 22"). In the other, you'll strictly speaking still be fine due to the main legs, but that will put a lot of strain on the hinges connecting the wings to the main segment (this is the instability you mention "in the corners"). Also, this second design requires at least two hinges per wing, preferably as far as possible from each other.

The table will topple when the vector sum of all the forces including the weight of table legs and wings fall outside the polygon created by the footprint of legs.

So you need to find the weight of your frame and its CG ( which appears to be at a height of 60% total table height). Then you measure the weights of each wing and find its CG at two positions, tilted down and deployed.

Ultimately you will have a mass M of the table and one set of x,y,z for its coordinates of CG for each configuration.

Now you apply your test load P at any point on the table surface outside the polygon of support traced by its legs. If the resultant sum of {[P, multiplied by its distance from the CG of the table in x-direction and M, multiplied by the table's X coordinated of CG] divided by M + P} is bigger than X of CG, the table will topple under that combination of force and position of force.

If you write a small routine on a spreadsheet and repeat this algorithm with bigger off-center for the position of the load you will obtain a contour line around the legs polygon which delineates what are acceptable safe loads and at what positions. Basically, it would look like the topology of a hillside with a flat pad on top ( the polygon traced by legs) and sloping down from there.

10
How do I calculate the strength of a weld joining two crossed rods?
0
Positions of Max Load a human would exert on horizontal rods of such a system by positioning leverage & bodyweight?
1
Calculating force exerted on plate by link
1
Which design to maximize friction for a device standing on concrete?
1
Push button design for small gadget
5
“Heavy-duty” or not, can my drawer slides really support this weight?