Refer to the chapter 14 of the Wilson book "Dynamic Analysis of structures": calculation of stiffness and mass orthogonal vectors. 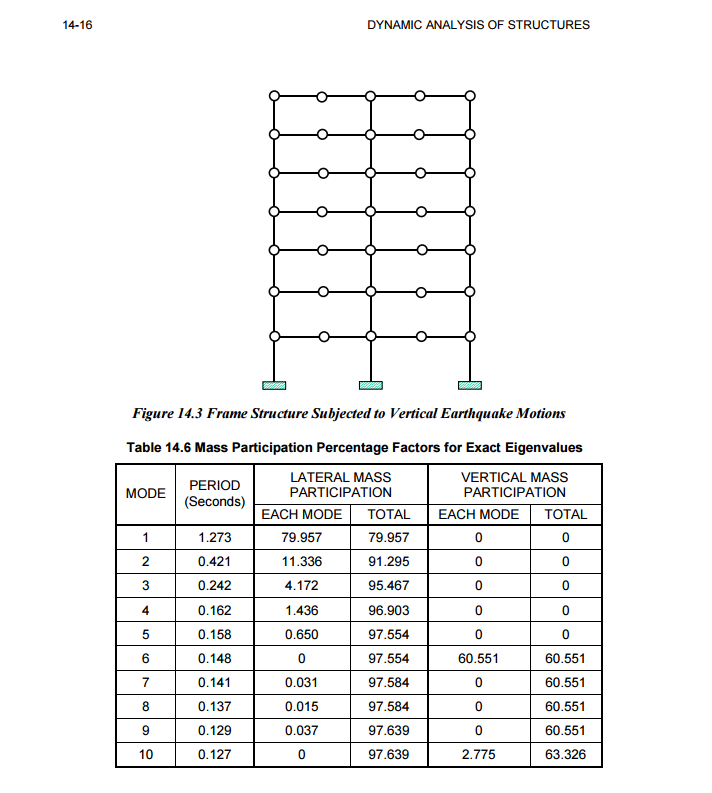 I don't understand how can one tell whether an eigen mode contributes to lateral mass or vertical mass. From my understanding, mass participation for each mode is determined by the general mass and the eigenvector of the mode, and eigenvector of the mode usually consists of contribution from all the $x$, $y$ and $z$ direction, so how can one tell whether the mode is contributed to lateral or vertical direction?

That is correct in general, but for a simple and very symmetrical frame model like your drawing it is quite likely that the lowest frequency modes of the response will either be a mainly lateral "swaying" or "twisting" motion, or a mainly vertical "pogo stick" motion.

In that situation, you can decide whether the modal mass participation is "mainly vertical" or "mainly lateral" simply by looking at plots of the mode shapes.

The higher frequency mode shapes will tend to be more localized, and have more cross-coupling between "lateral" and "vertical" motion, but in a simple model they may be too inaccurate to be of much practical value.

Calculating more "accurate" values instead of the zeros shown in the table may not add much value to understanding how the structure behaves, especially in a text-book example, because the differences between the real structure and the simple model may be greater than the errors in taking the "small" mass participation factors as zero.

After splitting the modes into two groups in this way, you can (approximately) consider the effect of vertical and lateral base loading independently.

Not the answer you're looking for? Browse other questions tagged structural-analysis modal-analysis eigenvalue-analysis or ask your own question.

5
How can we derived the equivalent Lumped Mass Model for irregular building and how to calculate the errors?
4
How to calculate the relative contribution of each mode in seismic dynamic mode analysis?
4
Accidental Torsion and Equivalent Static Load for an irregular structure
0
Relation Between Distributed Load and Shear
3
Relation between natural frequency and the thickness
0
What is the difference between base shear and pseudo lateral load in seismic analysis of buildings?
2
Are the modal participation factors bounded for shock response spectrum analysis?
0
Given the same diameter and height, which is stronger? A vertical standing cylinder or a vertical standing rectangular?
2
Why and how are resonance frequencies of a system dependent upon the shape, mass and the way it is constrained?