Please excuse my novice use of terminology and suggest how I should modify my presentation if you have time.

"FIG. 2 illustrates that the size of the central opaque region 40 defines a target exposure area 76 on the substrate 60 by shading the target area 40 from direct illumination by the light source 72. This allows only the interference patterns from the cascaded grating pairs 56 and 58 to reach the target area 76. Preferably, the size of the target area 76 can be from a few millimeters to a centimeter square, and is comparable to the exposure size for an optical stepper."

"The linearly polarized monochromatic light from the light source 72 indicated at 80 is first diffracted by the first and third mask gratings 44, 50 on the top surface of the mask 10. Most of the photon energy is contained in the first order diffraction beams labeled as +1 on the right and -1 on the left. Other diffractive beams and the zero order transmitted beams are not shown in FIG. 2 because they do not play a role in the final grating formation. When the +1 and -1 diffraction beams reach the second and fourth mask gratings 48 and 54 on the bottom of the mask 10, two new diffracted beams labeled as +2 and -2 are generated. As shown in FIG. 2, the target area 76 is the area where only the desired +2 and -2 beams can interfere, thereby exposing a grating 90 which has a period of approximately 1/4 of the periods in the mask gratings 44, 48, 50 and 54." 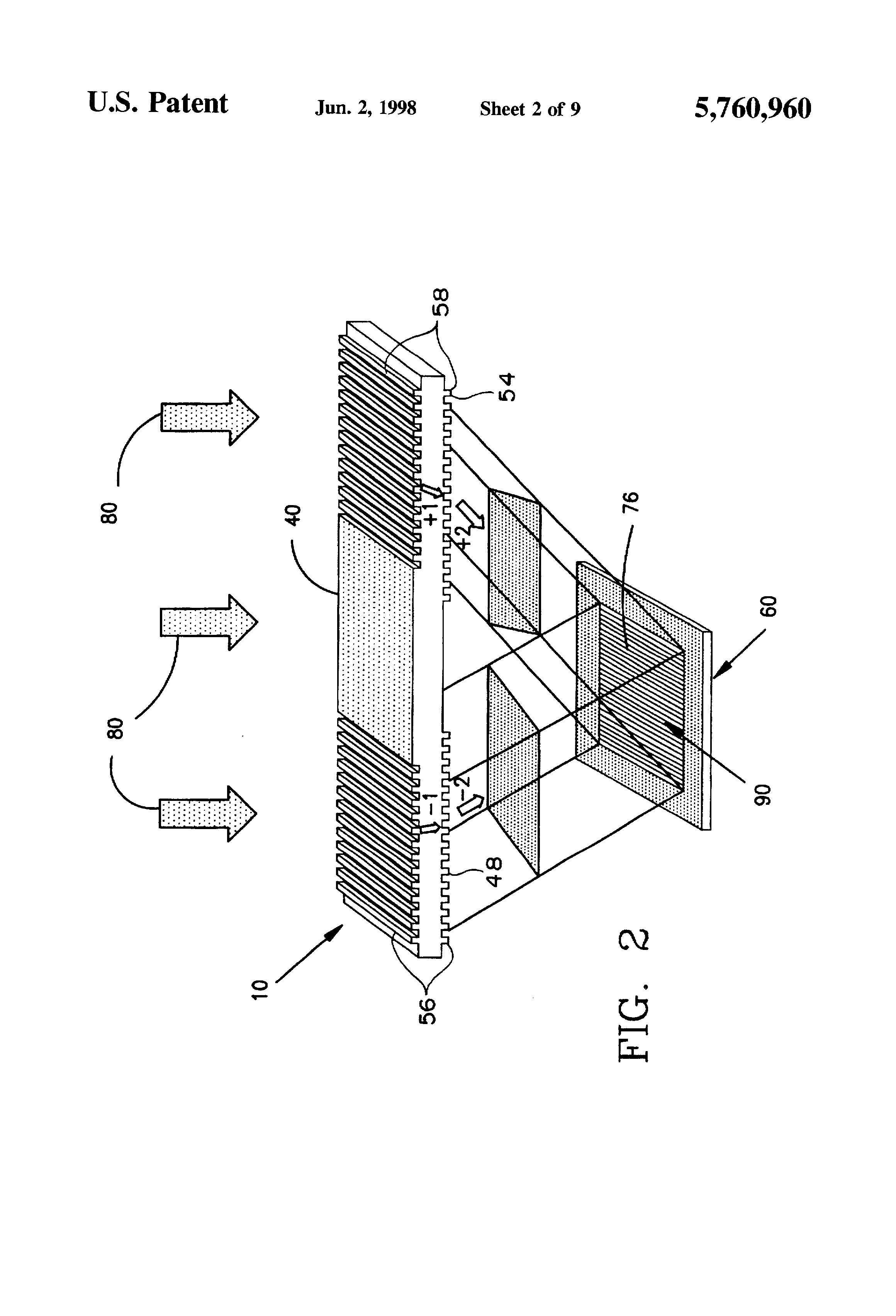 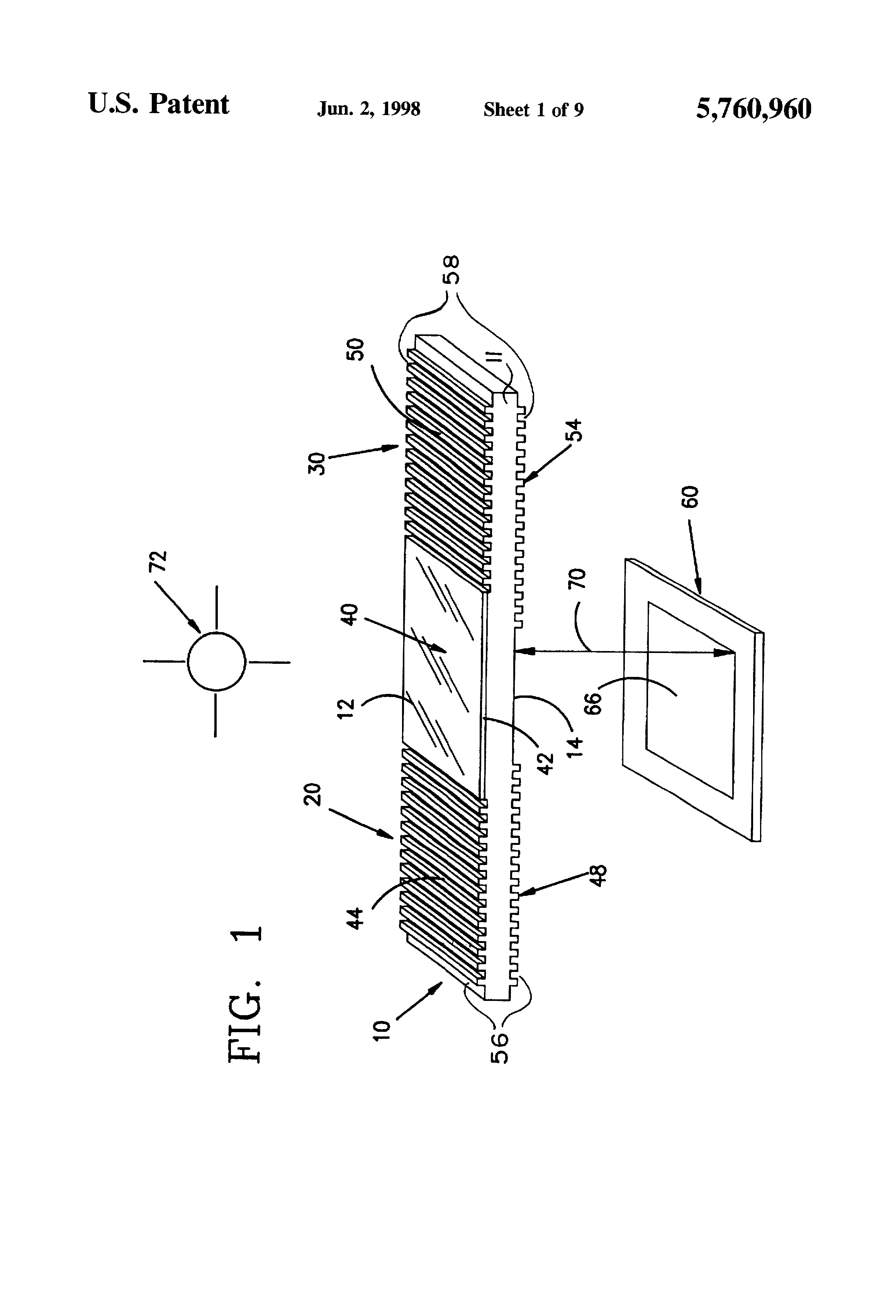 Grover A. Swartzlander wrote in 2000 in the attached article , "Peering into Darkness with a vortex spatial filter" , at the bottom of this question that "It is sometimes desireable to attenuate the intense glare of a bright coherent beam of light to enhance the detection of an incoherent background signal or a weak nearly collinear source". I would like to extend this research to protecting airline pilots from the effects of laser pointers shone from the ground at planes on takeoff and landing. The reason I wish to enhance the detection of a weaker incoherent background signal is to image this signal on a Planar transparent display.

The original question was along the lines of: "what happens if light passes through cascaded gratings". Before that question can be answered, you have to understand what a single grating does. See the image below: a single beam of light will be split up into diffraction orders, numbered $n=0, \pm 1, \pm 2, \ldots$. 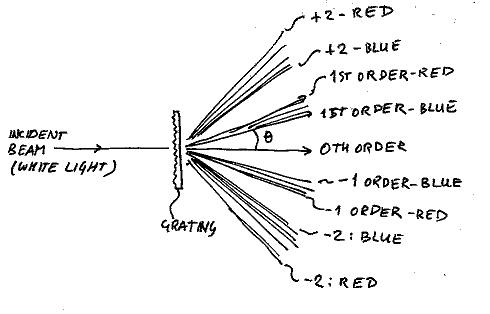 If the incident light beam is a mixture of wavelengths, then all diffraction orders other than 0 will have diffraction angles $\theta$ depending on the wavelength and the order, i.e., $\sin\theta=n\lambda/d$, where $d$ is the grating line pitch and $\lambda$ the wavelength. This is for a transmissive grating with normal incidence. If the incidence is close to normal, the formula is approximately correct; for large angles, the formula gets a bit more complicated (Wikipedia). For a reflective grating, the angles are roughly half of this. If there is no solution for $\theta$ for a given value of the $n$, it means that that diffraction order does not exist.

A grating can be designed such that the zeroth order is suppressed, like in the picture below. Generally, a high suppression is only possible for a single wavelength-angle combination. In this picture, the incident angle is 0 deg (normal incidence).

You may think that suppressing the zeroth order is a good thing if you want to protect aircraft pilots against laser beams. However, if you consider the scenario where the laser beam can have any angle and may hit the grating at any position, then you'll see that this approach will not really help the pilot. In the following picture, laser beam B1 would have hit the pilot's eye if there hadn't been a grating and laser beam B2 would not have hit the pilot's eye. With the grating in place, the pilot's eye gets hit by the $n=-1$ diffraction from beam B2. For this grating, which has only the orders $n=\pm 1$, you roughly double the chance of a random beam hitting the pilot and any hit will be at half of the original intensity. 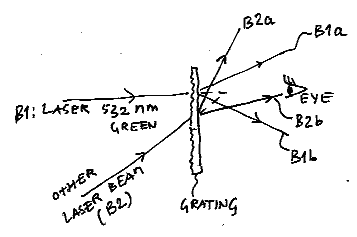 Now that we understand what a single grating does, we can look at the case of cascaded gratings, which should speak for itself. Now, each incident beam will result in four new beams -- or even more if the gratings allow other orders than $n=\pm1$. If the gratings have different line pitches $d_1$ and $d_2$, then there will be different diffraction angles $\theta_1$ and $\theta_2$ for the first and the second grating. 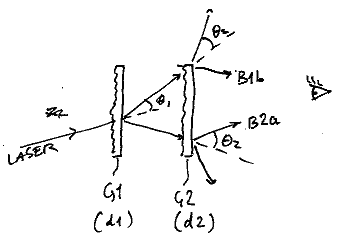 Now, you can arrange the gratings in such a way that you put some object (maybe a third grating) at the location where beams B1b and B2a cross. Depending on the exact wavelength and path lengths of the two paths, the beams may interfere destructively or constructively. The patent and the paper that you refer to are along those lines. You should bear in mind that in such applications, the incident angle of the beam incident on the first grating and the distances between the gratings and the position of the detector should be exactly right within a fraction of the wavelength; otherwise it won't work. For the application that you have in mind (aircraft cockpits), this is not the way to go. Keep in mind that "background light" and "foreground light" is a subjective distinction. All that matters for the grating is the angle, the wavelength, and the position on the grating where a light ray hits the grating.

Moreover, if you replace the cockpit windows by diffraction gratings, the light from the horizon and the landing strip will be diffracted as well and will make it nearly impossible to see objects on the outside.

If you want to protect a pilot against the most common high-power laser pointers (532 nm wavelength), you should be using dielectric mirrors as filters. Such mirrors have a coating that is a stack of thin layers, tuned to reflect light of a certain wavelength. Schematically:

They can be designed to reflect only over a very narrow wavelength range, in which case they are called "notch filter". You can buy these off the shelf, for example Edmunds OD4 notch filter. A disadvantage for pilot protection is that the reflecting wavelength will depend on the angle of incidence $\alpha$. The only way to make them reflect 532 nm wavelength over a wide range of angles is by making them reflect over a large range of wavelengths. If you do that for green light, you will probably end up with something resembling very dark sunglasses, which only transmit deep red and deep blue light and block orange-yellow-green-cyan.

Not the answer you're looking for? Browse other questions tagged optics signal-processing or ask your own question.

3
3D matrix for staggering 5 ten degree wide bands of angle of incidence shifted by target wavelength and optical path difference in arithmetic series
-1
Is it possible to adapt the design and principle of operation for a tunable microwave photonic notch filter to a visible light photonic notch filter?

4
Focusing light from a laser shot into one point
0
Is it possible to make a tunable coherent light filter with 1.8 nanometer bandwidth for visible light?
2
How does the Michelson interferometer measure the self-coherence function of coherent light in an incoherent background?
0
How is an digital coherent receiver able to achieve 100 Mhz line-scan rate for detecting coherent light in the presence of incoherent light?