Buckling of a cantilever with midway support

I'm trying to understand the implications for buckling and column sizing in the drawings below.

A 3000mm 120x60 RHS steel column supports a 350mm horizontal steel beam. The column base and right side of the beam are both fixed but can pivot. They are joined by a continual fillet weld "T" join, so the junction can rotate but will retain its angle. The only load is a vertical static force on the left-most 100mm of the horizontal beam. The column can be placed at any position under the beam, as shown in the 3 drawings (nearer to the right would be better). The thickness of the beam is thick enough that it will not deflect noticeably or materially. The thickness of steel in the RHS column is to be based on calculations.

My question is this:

The column's required cross-section clearly depends on the axial compressive force, which varies according to the column's position. But the eccentric load is a concern and I can't be quite sure if I am right to ignore it here.

Assuming that the beam is sufficiently rigid and won't noticeably deflect, then when the column position changes to the right (as shown), does the column experience only an increased axial compressive force, or should I also consider an additional bending moment imposed on the column as well?

My reason for thinking I can ignore it and only consider the axial compressive load on the column, is that wherever the force applies on the beam, the column only experiences it as an axial load. But I'm not 100% sure since if the beam deflects even slightly (as it must), this must cause bending of the column (as they are welded) and therefore a bending moment in the column (however slight).

Is this effect significant compared to the increased axial compressive force, or is it trivial and dominated by the increase in axial compression? Do I need to allow for an additional bending moment in my buckling calculations, in this situation, to ensure the column profile is adequate? 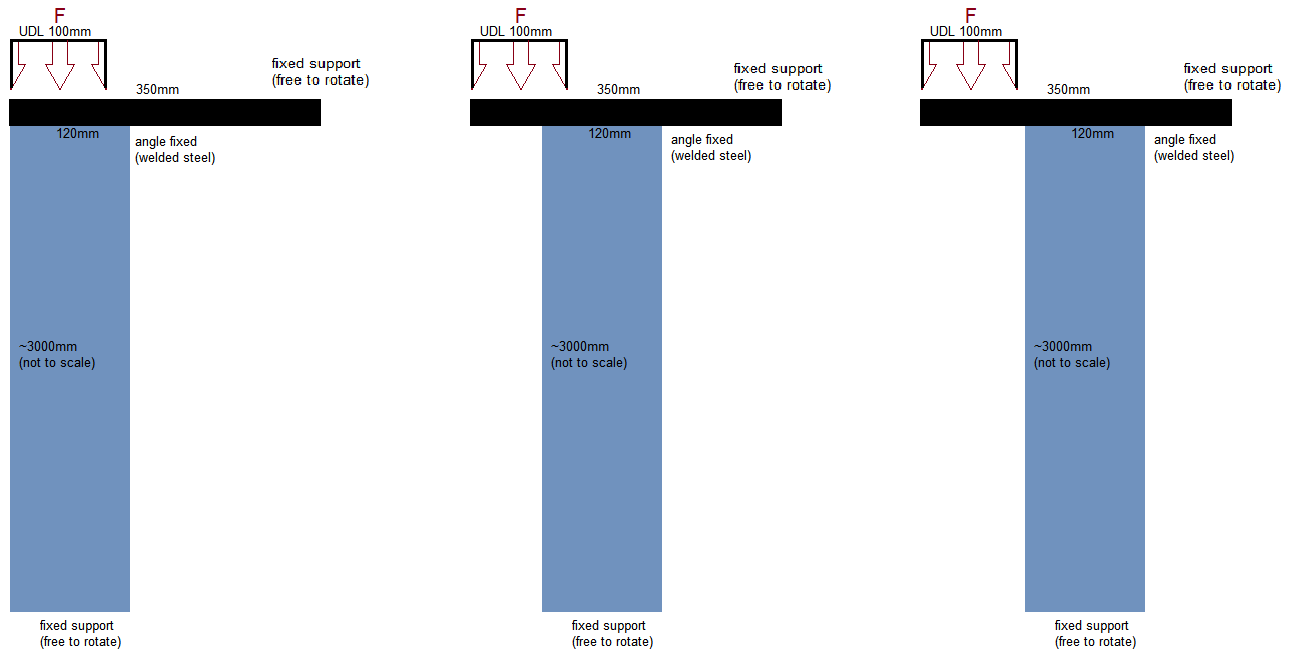 (NOTE - I am based in Europe so any specific calculations would be Eurocode not North America code based. That said, the question isn't really about specific code calculations and it shouldn't matter)

A general rule of thumb is that if the center of the vertical load is within the middle 1/3 of the column (kern), the eccentricity of the load can be ignored. You will have to calculate this for each possible position of your load.

The general rule for engineering is that if you can't dismiss it based upon experience or a trivial side calculation, calculate it. It may very well be trivial, it may not be. But until you're willing to risk your license on it, calculate it. Ultimately, every eccentric load, at some point, induces enough moment that the moment + compression load will cause buckling.

You probably don't have to include it in the formal write up, you can just state your recommendation in the notes without justification. Most likely, nobody will comment on it. But if it's concerning you, calculate it, make sure that you're satisfied it'll pass all of the methods of failure, and state that it is your recommendation.

Not the answer you're looking for? Browse other questions tagged beam columns buckling moments or ask your own question.

5
Axial deformation of variable cross-section member
4
Reinforced Concrete Columns - Interaction Diagram Question
1
Critical Buckling Load for a Spring Supported Bar
1
How to analyse a beam considering P-delta effect?
0
RHS column profile able to replace 3m UC 152x23 column?
1
Simple steel column buckling calc - where am I going wrong? (Eurocode)
1
What criteria must apply for torsional effects on this beam to be ignored in calcs?
0
Calculate deflection of a beam with an arbitrary shape
4
Why is local yielding considered the limiting case in context of buckling in Eurocode?