Structural Analysis of a Space Frame

For loading purposes, each member of the frame can be considered to have the same uniformly distributed load along its entire length. 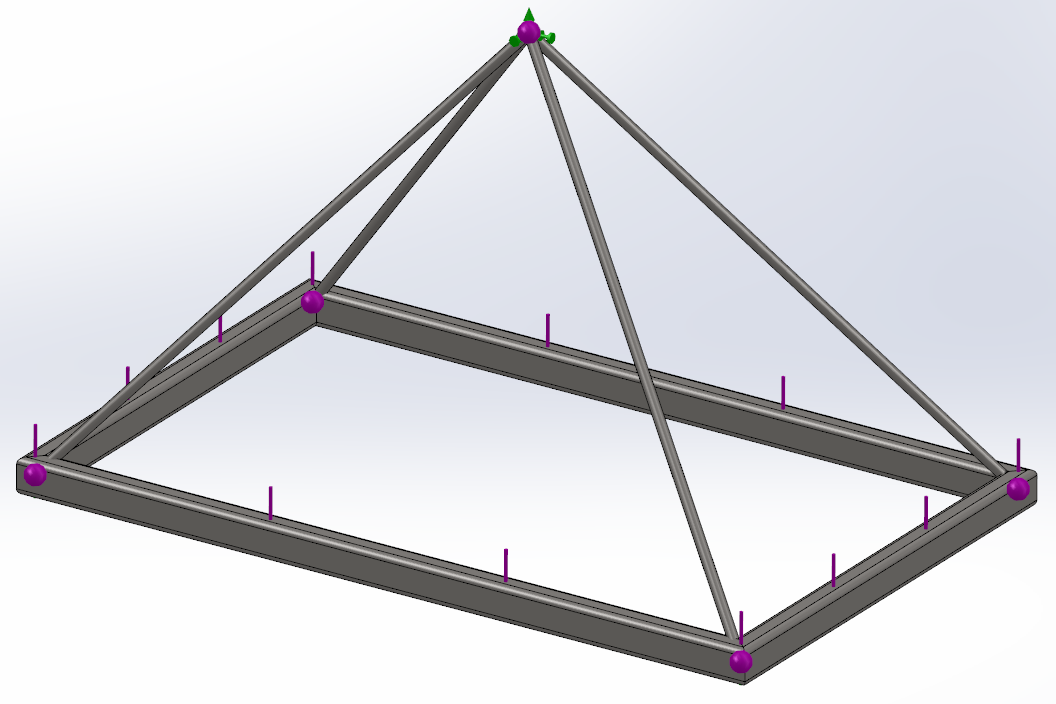 I have been poring over static, mechanics, structural analysis and other books and resources trying to find the methodology for analyzing this but all of these resources seem to stop at planar structures where the loading is in the plane of the structure. Either this is a difficult problem, I am overthinking things, or I have been out of practice with respect to statics for too long.

What I have so far is a free body diagram where I have replaced each cable with a spherical moveable support (the 3D equivalent of a roller support). Each corner is free to rotate in all three directions and to translate in the plane of the frame but not out of it. So there is a single vertical reaction force at each corner (which is actually the vertical component of the cable tension). This is an assumption. Please let me know if I am wrong.

The degree of static indeterminancy is $(6m + R) - 6j$, where $m$ is the member count, $j$ is the joint count and $R$ is the number of unknown reaction forces. Plugging in the values leads to an answer of 4. However, I think I can actually reduce that to 1 since (due to symmetry) the reaction force at each corner is identical.

And this is where I am stuck. What is the next step? Or is this the point at which people say "let the computer solve it".

You state in a comment beneath @Jodes' answer that since the structure is welded, that the joint can be considered fixed. The veracity of that claim is somewhat arguable (especially if done "artisanally"), but let's go with it. After all, if the joint were considered hinged, then the solution for each beam would be trivial and equal to a simply-supported beam.

So, thankfully, the actual solution even if we consider the beams to be fully fixed to each other is still basically the same as if we'd considered them simply supported. The reason for this is the bi-symmetry of the structure (including its loading).

Let's call the long beams $L_1$ and $L_2$, and the short ones $S_1$ and $S_2$. Let's pretend the structure is hinged. In this case, due to the structure's symmetry, we know that both $L$ bars will deform equally, as will the $S$ bars. Therefore, the $L$ bars will both present the same rotations around their transversal x-axes at the extremities. Unfortunately, the structure isn't hinged, so these rotations will be transferred to the $S$ beams as well. However, since both extremities will transfer the same rotations, the $S$ beams will behave as if this is a rigid-body motion, and will therefore not suffer any torsion. Obviously, the same applies the other way around: the $S$ bars will be deformed by the loads applied and will impose a rotation on the $L$ bars. These, however, will be rotated equally on both ends and will therefore simply do a rigid-body rotation, without suffering torsion. Since the $L$ and $S$ beams are perpendicular to one another, they also don't transfer bending moment between themselves, meaning the bending moments at the extremities will also be null. The end result is therefore identical to that of a series of simply-supported beams.

So that you don't have to just trust me, here's a simple model. The purple diagram is the bending moment, which you can see is identical to that of four simply-supported beams. The orange diagram is the torsion suffered by each beam. It may seem large, but if you look at the scale on the bottom right you'll notice it's insignificant (maximum and minimum values equal to zero). 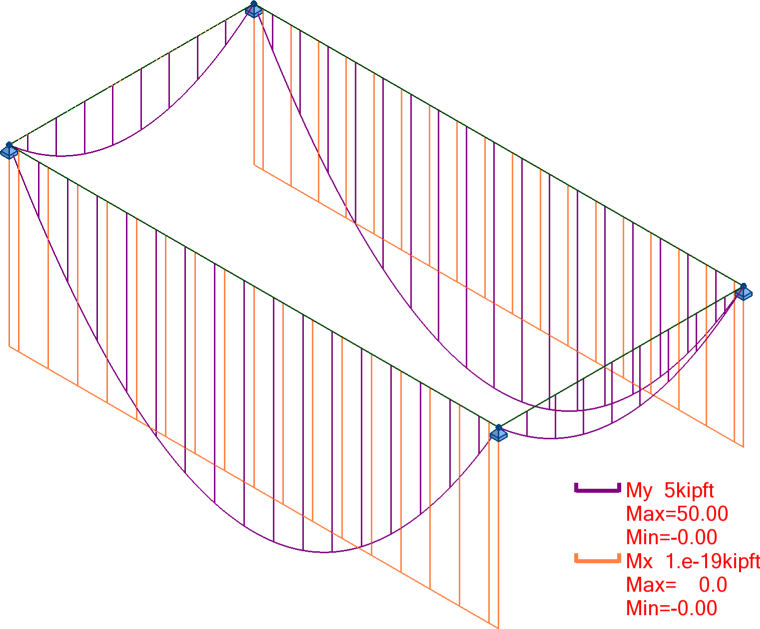 I am an ex rigger used to slinging heavy loads. You cannot spread the load equally over 4 cables. Three of the cables will support the load - the fourth will provide stability.

I know this from practical experience. I was involved in the construction of the Westgate Bridge. The rig we used to lift the box girded which weighed anywhere from 70 to 120 tonnes was a 3 cable arrangement.

If I was you I would assume the load is carried over two cables.

IMO there is much missing information, so it's hard to know what the next step should be. Without knowing, for example, how the pieces are joined, or how exactly the cables are attached, I wouldn't know what I'd need to calculate.

But without more information, I would treat the pieces as simple beams. Then taking each in isolation: apply distributed load, and the compression from the cables, solve to find deflection and stress. So not a strictly static / rigid body analysis, but not terribly hard I imagine?

IMO the real question is how far you need or want to go?

It's not clear what the difficulty is with analyzing this frame.

Since the frame is supported by cables, each cable ideally will support only a tension load. Since the frame is loaded evenly, one can make use of symmetry in decomposing it to find the loads in the cable(s). By the equations of statics, the vertical component of the tension in each cable must equal the weight of the portion of the frame attached to that cable.

0
Solar Array Frame Design / Statics Design Problem
2
How do I calculate the member forces of a truss when external force acts on the member (not joint)?
1
Structure analysis
3
Failure modes of a zimmer frame
0
Question on the determinacy of frame structures
0
Help with understanding bending moment diagram of a frame structure
1
Symmetry to determine the support reactions of a statically indeterminate frame