FEA: What boundary conditions am I missing?

I've attached a picture of a setup similar to the one I'm working on. The elements in white are rod elements; the elements in pink are bar elements. 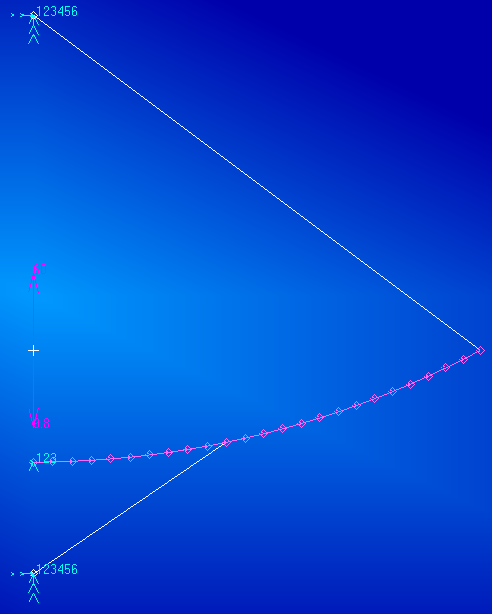 The loads and BCs are:

Here is some text from the f06 file:

Nodes 13 and 27 are where the rods connect to the bars, and Nodes 20 and 24 are just two random nodes on the right-hand side of the pink section.

Under the bar properties, there is an option called "Pinned DOF @ Node 1," which may or may not be helpful here. The options are UX, UY, UZ, RX, RY, RZ.

Generally high matrix factor diagonal ratios imply that I have a very stiff element connected to a not-very-stiff element, but Nodes 20 and 24 aren't where the rod/bar intersection happens.

Does anyone know how I might go about diagnosing the problem? I think I'm missing boundary conditions somewhere, but I'm not entirely sure where that is.

Whoops, I forgot to explain what behavior I expect from this contraption.

Since I have a really high angular velocity (and perfectly normal gravity), I would expect the pink nodes to move rightward and downward due to the loads. The only thing stopping them from moving indefinitely are the white rods. Since these aren't beams and don't transmit moment stiffness, all these rods can really do is extend in length and change angle, since they're required to be a straight line.

This will result in a shape that looks similar to the pink curve, but probably shifted rightward a bit.

I ran the case with PARAM,BAILOUT,-1 (linear static), and I got the following clearly incorrect deflection ($10^7$ m deflection): image removed since it didn't provide any useful information and it took up too much space.

I've pinpointed the problem, I believe. 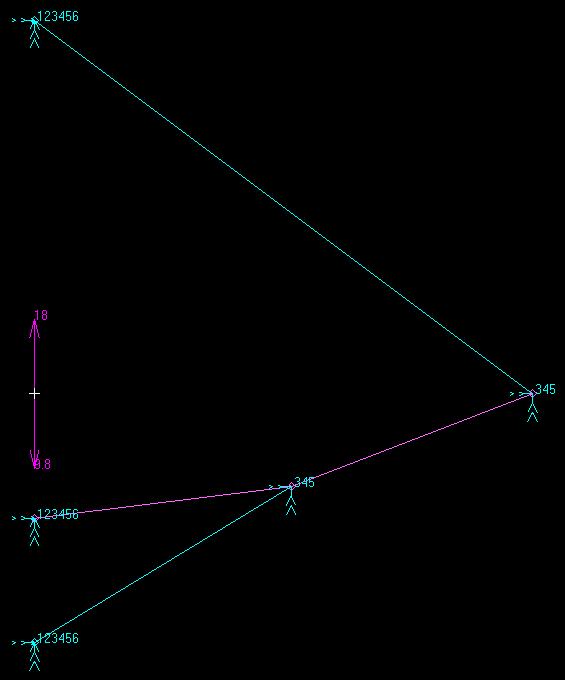 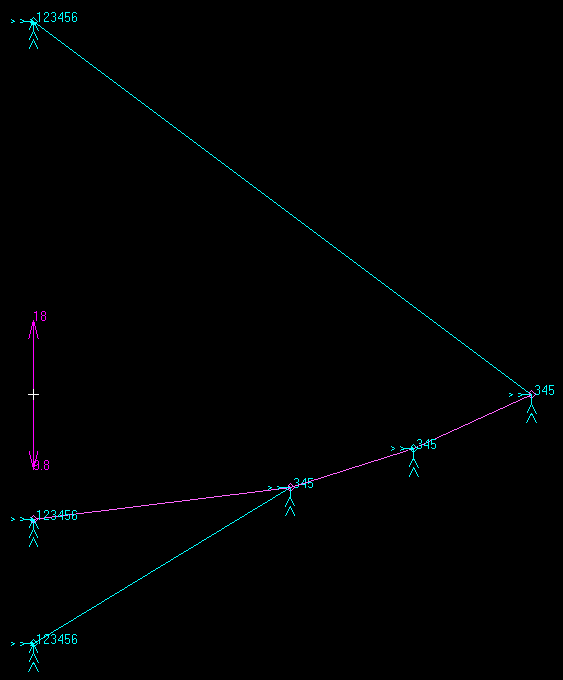 The second case failed to converge, and it had a problem with my new node - it told me that it's having diagonal ratio problems in the T2 direction.

There's something NASTRAN is doing wrong with how these two bar elements are connected at this node. Any ideas?

After a long discussion with the OP in comments and chat, it emerged that the basic cause of the problem is the geometry of the structure. The curved "beam" has a length/diameter ratio of about 50,000:1.

As this answer Stiffness Method FEM - Slender Members points out, the relative size of the axial and bending stiffness of a beam is of the order of $L^2/d^2$, or around $10^9$ for the OP's structure.

For practical purposes the elastic bending stiffness of the OP's beam is zero, and it will resist bending only because of the stress stiffness created by the axial tension in it.

One approach to modeling this would be to start with a straight configuration of the "beam", modelled by rod elements not beams, to eliminate the vanishingly small elastic bending stiffness from the model. A nonlinear stress analysis could then start by applying a tension force to pre-stress the structure, and then change the loading in increments to the actual loading conditions.

Another idea would be to perform a nonlinear dynamic analysis, and let the inertia of the structure constrain its behaviour under the initial loads. You would have to include some fictitious damping in the model to produce a final steady-state solution.

A naïve approach to overcome the $10^9$ ratio of axial to bending stiffness would be to use short beam elements so that the stiffness ratios within each element were of similar magnitude. But to achieve that, the model would have to consist of say 10,000 or 100,000 elements, which is not likely to be a sensible way to attack the problem.

From my own experience I would not choose Nastran to analyse such extremely nonlinear behaviour. A FEA package that was designed "from the ground up" to deal with nonlinear analysis, such as Abaqus, would be a safer bet.

It would be worth searching the literature for similar types of problems - for example the mechanics of cables for mooring floating structures in the offshore oil and gas industry.

The OP might get some qualitative insight into the structural behaviour by increasing the diameter of the beam (probably by a few orders of magnitude) to get the model to run.

Not the answer you're looking for? Browse other questions tagged structural-engineering finite-element-method or ask your own question.