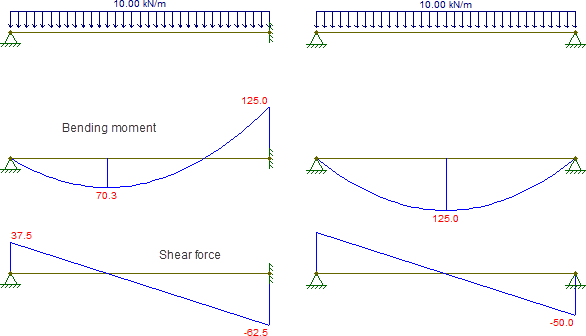 4
Why does a continuous beam have less deflection than a pair of simply supported beams?
4
What is the advantage of statically indeterminate structures?
1
Is continuous beam design deemed "unsafe" by any code of practice/design practice for reinforced concrete building structures?

1
Cantilever with three parallel rods
4
Accidental Torsion and Equivalent Static Load for an irregular structure
4
Why does a continuous beam have less deflection than a pair of simply supported beams?
1
How to handle modal combination in response spectrum analysis for member forces for member with more than 1 element?
4
Is pin column-beam joint always have less moment, more deflection compared to fixed joint?
3
Beams in Bending: Bending stress / strain distrution
0
Reaction forces on a three support continuous beam with two of them requiring compatibility equations. Superposition method done wrong!
0
How does one conclude that the beams in this problem will be inclined?
1
Design procedure used in beam design